"I am here to fight and win the election and not to contest for the sake of contesting," said Congress candidate Manvendra Singh, son of former BJP leader Jaswant Singh. 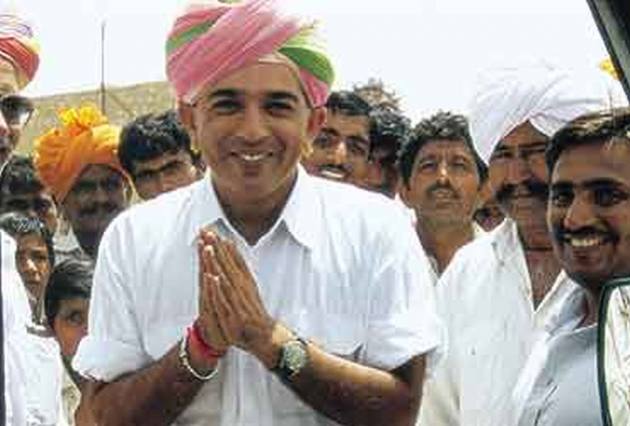 Fighting the most keenly observed contest in Rajasthan polls, Congress candidate Manvendra Singh said on Friday it was an "uphill task" to beat Rajasthan Chief Minister Vasundhara Raje in her political fortress of Jhalrapatan, but he was here to "fight and win" the election.

With a battle cry of "Jhalawar azaad hoga (Jhalawar will be free)", Singh said he is determined to live up to the challenge of taking on his formidable opponent.

"I am here to fight and win the election and not to contest for the sake of contesting," the son of former BJP leader Jaswant Singh said.

Fray Before A Fight

In Poll-Bound Rajasthan, Winds Of Change Have A Loud Echo

Manvendra Singh, who crossed over from the BJP to the Congress just weeks before joining the electoral fray, said when he was asked to fight against the chief minister, it took him just a second to accept the challenge.

Asked if he was viewing it as a "David and Goliath" battle, Singh answered in the negative.

Rejecting his rivals' claims of being seen as an outsider here, Singh said he has been accepted "very wholeheartedly, very warmly" by the people of Jhalrapatan.

It doesn't take people more than a day or two to know whether one belongs to them or not, Singh said.

On the kind of feedback he was getting after campaigning extensively in the Jhalrapatan constituency, Singh said: "I am being realistic. I am not pinning my hopes on a miracle, but it is not impossible. I am getting very positive feedback from the people and from the Congress workers who have been toiling on this seat for many years."

Despite the "very positive" feedback, Singh said, he keeps putting himself through a reality check and every time he gets a positive report, he keeps questioning that report to figure out where all it could go wrong.

Asked if the treatment meted out to his father by the BJP will have a bearing on the election, he said: "I don't think the BJP as such is answerable for this as Prime Minister (Narendra) Modi told me, it is some individual in Rajasthan and a couple of people in Delhi that are responsible for it."

He asserted that it will have a bearing on this election as it was a topic of discussion, not by him but by other speakers in some of the meetings.

On whether he would be in the running for the chief minister's post if he succeeds in the giant-killing act of defeating Raje, Singh said, "No, not at all."

What has made the Singh-Raje battle the most talked about is the tension between the two leaders that is well known.

Singh, 54, quit the BJP in September and joined the Congress in October after being sidelined within the ruling party, reportedly because of Raje's feud with his father Jaswant Singh, who was denied a BJP ticket in the last Lok Sabha polls.

Asked if it was also a "prestige battle" for him, Singh said, "I don't personally (take it as a prestige battle) and I don't link it to any kind of revenge that people talk about. I am just looking at it as an electoral contest and it should remain that way."

The contest should remain clean and fair, he added.

On Raje's statement that the Congress could not find a constituency for him and therefore fielded him against her from here, Singh said he didn't ask for a constituency.

"I was very clear from the time I joined the Congress party that I wasn't interested in a Vidhan Sabha election and I didn't ask for a seat for myself. So I think she is off the mark when she says that," he asserted.

He said the main issue in this constituency, on which he was taking on Raje, was farmers' distress.

"I was surprised by the distress among the farmers. Within the MLA constituency, there have been two farmer suicides in the last year or so," he said.

There is a seething anger about the garlic crop and how badly it has been handled in terms of the minimum support price issue, Singh said.

To resolve the MSP issue, the government came up with some kind of token system and those who have got a token would have their crop picked up, while others had their produce rotting in their house, he alleged.

Singh said the decision to switch to the Congress from the BJP evolved over a period of time and it was cemented by two factors -- his friendship and fondness for Rahul Gandhi and a senior member of the BJP family telling him that wherever former prime minister Atal Bihari Vajpayee would be, he would be blessing him.