Fresh reports emerged that the L&T was planning to sell its stake in the Metro Rail, but L&T said they were baseless 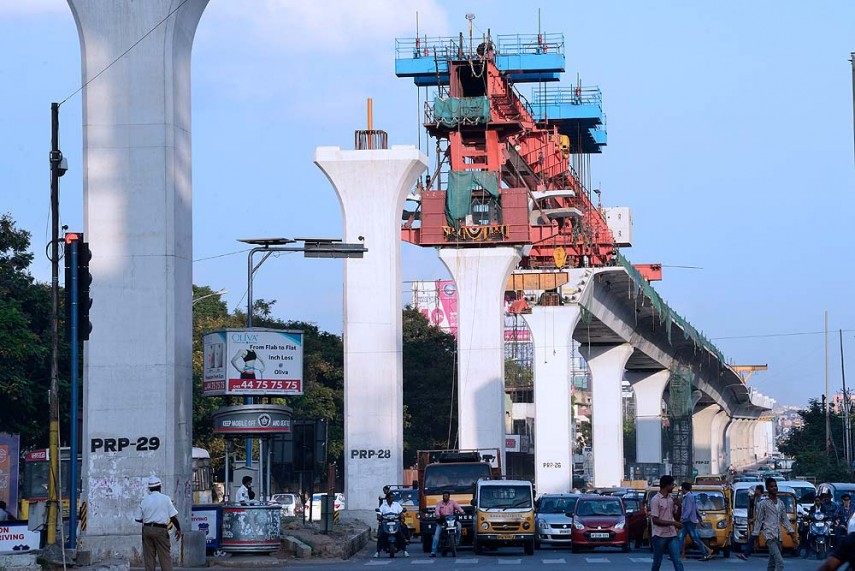 Controversies and the Hyderabad Metro Rail Project appear to go hand in hand. Around two years back, the L&T had threatened to pull out of the project following differences with the Telangana government over route alignment. As some heritage buildings and commercial zones such as Sultan Bazar, Badichowdi were being affected, the K Chandrasekhar Rao Cabinet had mooted some changes which the L&T found unviable.

Former L&T Metro Rail MD V B Gadgil appeared to share cold vibes with the Telangana Chief Minister K Chandrasekhar Rao over several issues and the initial plan was to launch a part of Metro's operations by June 2 this year did not work out as planned. In May this year, the L&T announced a new CEO and MD Shivanand Nimbargi. The outgoing Gadgil has said that he had been with L&T for 44 years and this was the only project he was leaving midway. Stating that costs were dynamic, he gave a new deadline of December 2018 for an estimated completion of the project. He had even jokingly said that if he wrote his personal memoirs, the story of the Hyderabad Metro Rail project would occupy a significant place in the same.

Of late, fresh reports emerged that the L&T was planning to sell its stake in the Metro Rail. However, the infrastructure major was quick to issue a rebuttal stating these reports were baseless.

S N Subrahmanyan, deputy managing director & president, L&T issued a press statement: "The project is moving on the right track and L&T is committed to the project. Whole-hearted support and cooperation from the Government of Telangana under the leadership of Honorable Chief Minister of Telangana, is fully there. City obstructions that crop up are being tracked and addressed at regular intervals at the highest level, to make sure that the momentum is not lost and the project is completed."

He emphasizes that about 67% of the work has been completed as of September 30, 2016 "which by all standards is a speedy execution". He also spoke about "work progressing at a brisk pace is difficult and crowded stretches such as the Sultan Bazar area in spite of the rains and the festive season". The TRS government, in the meantime, is yet to react to these reports.

The new district fever rules the minds of most politicians in Telangana nowadays. Chief Minister K Chandrasekhar Rao had initially planned to expand Telangana State, which currently has 10 districts into 27 districts. But following demands from various quarters, KCR might probably concede four more districts, namely Jangaon, Sircilla, Gadwal and another in the Adilabad district with Asifabad as its capital. KCR has been holding consultations with senior party leaders on the district reorganization issue and is expected to make a Dasara announcement. Deputy Chief Minister K Srihari after a meeting of the State Cabinet on October 7 told the media that the total number of districts would be more than 27. However, the exact number of new districts would be known only after final notification is issued for the purpose.

A committee consisting of TRS MPs K Keshava Rao, B Vinod Kumar and Vice-Chairman of the State Planning Board S Niranjan Reddy has been looking into new the district planning issue. It is estimated that each district would have a population of 3 lakh each. While the Congress has toned down its criticism of increase in number of districts after its demands were granted, the Telugu Desam is unhappy. The Telangana TDP president L Ramana alleges that KCR has taken up the district reorganisation in haste despite the assurance that it would be done only after an increase in the number of Assembly constituencies. Ramana alleges that KCR was doing so in order to divert the attention of people from farmers' agitations over land evacuation, its inept administration and the Eamcet paper leak scam.

The Human Rights Forum, meanwhile, has expressed objections to the formation of new districts. V S Krishna, HRF general secretary says that the proposal to redraw adivasi areas, so contained in Schedule 5 of the Constitution, is a matter of extreme disquiet. "We have no hesitation in stating that the proposals mitigate against the very spirit of the Fifth Schedule of the Indian Constitution. Any move to merge the mandals of Fifth Schedule as well as Tribal Sub-Plan villages with the plain areas and redraw boundaries in the name of re-organisation will further jeopardise the interests and rights of adivasis," says Krishna.

Adivasis in Telangana are largely spread over the districts of Adilabad, Karimnagar, Warangal, Khammam, Nalgonda and Mahbubnagar. The area they are resident in is declared the Fifth Schedule of the Constitution that expressly provides them protection from alienation of their lands and natural resources to non-adivasis. The Fifth Schedule (along with the Sixth Schedule) has been described by experts as a "Constitution within a Constitution".

It was back to student days again for Telugu Desam MLAs as Andhra Pradesh Chief Minister N Chandrababu conducted a three-day leadership empowerment programme for them. The MLAs took part in group discussions, made 40 presentations and were also evaluated. Some 60 professors took part in the workshop. Naidu urged the Telugu Desam leaders to do their utmost to be of service to people in their constituencies. TD party general secretary Nara Lokesh who attended the workshop at KL University in Vijayawada on the third day made a presentation about leveraging technology.

Reacting to reports in Sakshi — owned by YSR Congress chief Jagan Mohan Reddy— that Lokesh had been avoiding political meets owing to a rift with his dad, Lokesh said he was not addicted to posts or power like Jagan. There has been speculation that Lokesh was unhappy with his father on not being given a Cabinet post. However, at the workshop, Lokesh sought to clarify that he had been suffering from neck and shoulder pain and had therefore been forced to lie low for some time. At the end of the workshop, the MLAs were also given grades in sealed envelopes and told about the areas where they could improve. These grades have been kept top secret and MLAs themselves have been asked not to leak anything to the media.