Thousands of people lined the streets as the mortal remains of the soldiers, wrapped in the tricolour, were brought to their native places in flower-bedecked military vehicles. 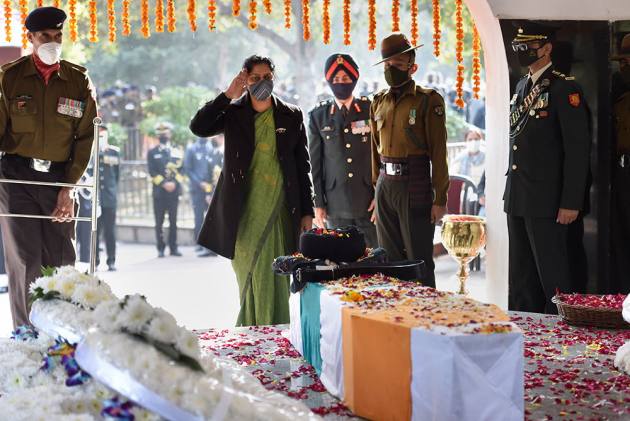 The last rites of Lt Colonel Harjinder Singh, Naik Jitendra Kumar, Naik Gursewak Singh and Lance Naik B Sai Teja, who were among the 13 people killed in a helicopter crash in Coonoor in Tamil Nadu last week, were performed on Sunday amid patriotic chants and an outpouring of grief.

Thousands of people lined the streets as the mortal remains of the soldiers, wrapped in the tricolour, were brought to their native places in flower-bedecked military vehicles. Defence Minister Rajnath Singh, MoS Defence Ajay Bhatt and the chiefs of the armed forces laid wreaths on the mortal remains of Lt Col Harjinder Singh at the Brar Square in Delhi Cantonment before his cremation. Lt Col Singh is survived by his wife Maj Agnes P Manezes (retd.) and daughter Preet Kaur, who performed the last rites.

India's first Chief of Defence Staff (CDS) Gen Bipin Rawat, his wife Madhulika Rawat and Brig L S Lidder, who were among those killed in the December 8 crash, were cremated at Delhi's Brar Square Crematorium on Friday evening, while five other security personnel were cremated on Saturday.

Born on April 17, 1978, Lt Colonel Harjinder Singh was commissioned into the Indian Army in September 2001. He served as Staff Officer to the CDS and belonged to 11 Gorkha Rifles, the same regiment as Rawat. There was hardly a dry eye as the last rites of Naik Jitendra Kumar, the PSO of General Rawat, were performed by his one-and-a-half-year old son while sitting in his uncle's lap in Dhamanda village in Sehore district of Madhya Pradesh

Chief Minister Shivraj Singh Chouhan, who paid tributes to Naik Kumar at the village before the funeral, announced financial assistance of Rs one crore for the soldier's family, a government job for his wife, a memorial to be built for him and a school in his native place to be named after him. The state government will also make arrangements for the education of Naik Kumar's children, he told reporters. People lined the streets and stood at rooftops at various places as the vehicle carrying Naik Kumar's mortal remains travelled from Bhopal to Sehore.

The scenes were no different in Tarn Taran, Punjab where three-year-old Fatehdeep lit the funeral pyre of his father Naik Gursewak Singh. Fatehdeep was dressed in clothes similar to the Army uniform that his mother had recently bought for him as Gursewak had once expressed the wish to see his son in Army fatigues. The soldier was accorded a gun salute as locals chanted 'Amar Rahe'. Singh is survived by his wife Jaspreet Kaur, daughters Simratdeep Kaur (9) and Gurleen Kaur (7), son Fatehdeep and father Kabal Singh. He last visited his family in November.

Lance Naik B Sai Teja was laid to rest in his native village Yeguvaregadi in Chittoor district of Andhra Pradesh. Teja’s younger brother Chaitanya, who is also an Army jawan, performed the last rites as hundreds of villagers chanted 'Jai Jawan' and 'Bharat Mata ki Jai' and bid a tearful farewell. Army officials solemnly presented the national tricolour to Teja’s wife as the mortal remains were buried in his agricultural land with full military honours and a gun salute.

The mortal remains of the Lance Naik were brought to his village in a flower-bedecked military vehicle from the Army Base Hospital in Bengaluru on Sunday morning. People carrying the national flag lined up along the 30-km route from the Andhra-Karnataka border as the convoy proceeded to Yeguvaregadi. Sai Teja, who joined the Army a decade ago, is survived by his wife, two children and parents.

The mortal remains of Army Havildar Satpal Rai arrived at Bagdogra airport in Siliguri, West Bengal and were taken to his native village in Takdah, near Darjeeling town. BJP MP Raju Bista, former Bengal minister Gautam Deb and state government officials paid tribute to the deceased soldier. Family sources said that the last rites of Rai, who was a part of the personal security detail of General Rawat, will be held on Monday. The soldier joined the Army in 2001.