The second leg of the final will be played at River's Monumental stadium on November 24. The match is expected to be attended by Russian President Vladimir Putin, who will be in the South American country for the 2018 G20 Summit at Buenos Aires. 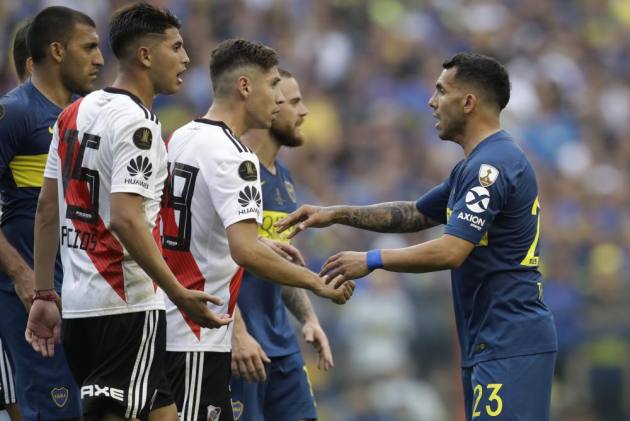 In a battle of life and death between the two sides which is separated by some eight miles, the visitors sans their fans, matched the home side backed by a boisterous crowd of more than 50,000 Boca fans, in every aspect of the game. But it was their goalkeeper Franco Armani who stole the show with some stunning saves throughout the game.

Regarded as possibly the fiercest rivalry in football, the two Argentine sides were playing in the final of the prestigious South American final equivalent to that of UEFA Champions League for the final time in 58 years.

Boca forward Ramon Abila opened the scoring in the 34th minute with his second effort from the edge of the box from a rebound. His first effort with the right foot was blocked by Armani but followed it up with a strong left-footed drive to breach the block.

But from the restart, the visitors hit back with Lucas Pratto finishing a through pass from the centre with a cool shooting skill with his right foot. The low finish from Pratto beat Boca goalie Agustin Rossi to the right.

The relentless hosts took the lead for the second time in the match, in the first-half injury time, with Dario Benedetto producing a control header from a free-kick, which beat a flying Armani to the left top corner.

From a winning position, the hosts allowed Plate to settle for a draw just after the hour mark thanks to an own goal by defender Carlos Izquierdoz.

A teasing free-kick from just inside the Boa half deflected from an Izquierdoz touch with his head and it beat Boca goalie.

The final, dubbed as the Superclasico of the century, was initially scheduled for Sunday but was postponed due to heavy rain.

The second leg of the final will be played at River's Monumental stadium on November 24. The match is expected to be attended by Russian President Vladimir Putin, who will be in the South American country for the 2018 G20 Summit at Buenos Aires.