It brought an end to a final tainted by violence and moved more than six thousand miles away from Argentina. 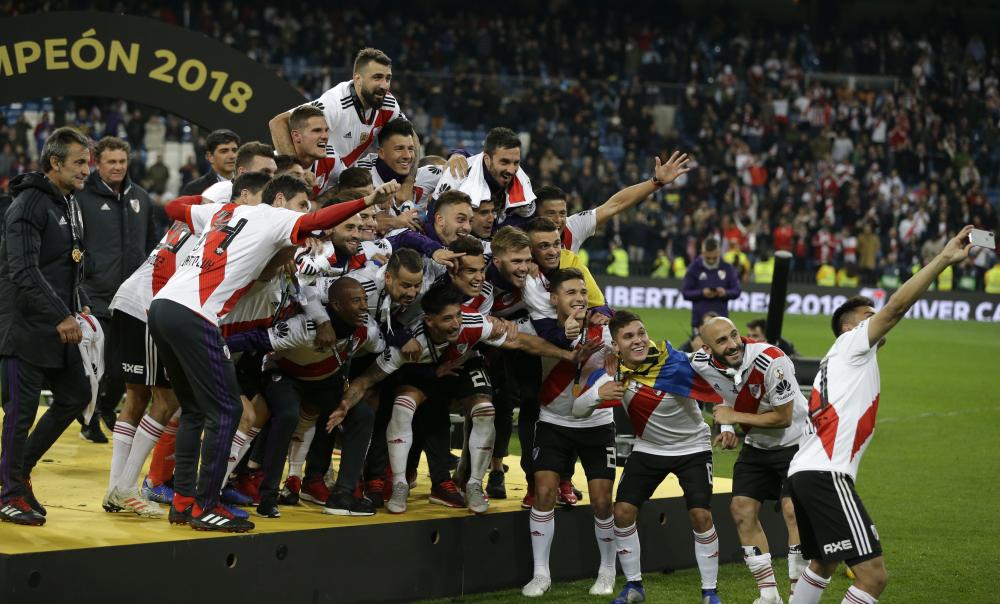 River Plate won the Copa Libertadores by beating their fiercest rivals Boca Juniors 3-1 after extra time on Sunday, bringing an end to a final tainted by violence and moved more than six thousand miles away from Argentina.

It means River prevailed 5-3 on aggregate after the first leg finished 2-2 and reclaim the trophy they had last won in 2015, lifting it for the fourth time in their history.

Boca took the lead through Dario Benedetto but Lucas Pratto equalised before Juan Quintero and Gonzalo Martinez scored in extra time, aided by Wilmar Barrios being sent off, to win a fittingly dramatic contest for River.

"We have shown we are superior," River's Leonardo Ponzio said. "After trying to stay quiet about everything that happened, we showed on the pitch we were better."

"The only thing I feel is sadness for not winning the cup and giving it to the people of Boca," Boca coach Guillermo Barros Schelotto said.

Postponed on three occasions and then relocated from Buenos Aires to Madrid, the supporters of these two great clubs showed in the Santiago Bernabeu why this fixture had been billed as one of football's greatest ever.

Lionel Messi, Antoine Griezmann and Diego Godin were among the 62,200 in attendance.

But, despite the bouncing huddles in the streets, the plumes of blue and red smoke, the swinging scarves, fluttering flags and fans that were chanting in their seats three hours before kick-off, there was nothing to extinguish the lingering sense of regret.

There was no repeat of the scenes that cast a shadow over Argentinian football and saw the original game at River's El Monumental on November 24 postponed, when around 50 fans attacked Boca's team bus and left some of their players injured.

Madrid, which will also host the Champions League final in June, was chosen in part because of its record of hosting major events and the security, which included around 2,500 police officers, did its job before kick-off.

Fans were separated into zones either side of the stadium and had to go through checks even to enter the area immediately surrounding it.

The shame was only that the operation was not as thorough 15 days ago and that a minority decided to take advantage.

Both clubs were allocated 25,000 tickets, with 5,000 of those reserved for residents of Argentina. The fear had been most of those buying would be tourists and neutrals, but the atmosphere suggested different.

Both teams had initially refused to play in Spain's capital but as the losers, Boca's sense of grievance will now become more entrenched.

They felt River were responsible for the chaos two weeks ago and should have forfeited the trophy. They took their case to the Court of Arbitration for Sport, but the appeal was rejected on Saturday.

When the players shuffled out two hours before kick-off to inspect the pitch, they held up their phones to capture the thousands already inside and the view of a stadium most of them had never played in before.

The cheers grew louder when they came out for kick-off. Then there were whistles as the teams swapped ends and each were greeted by their opponent's fans behind the goal.

Jonatan Maidana was playing for Boca when they last won the Copa Libertadores 11 years ago and, now in the red and white of River, he almost gave his former club an early lead, slicing just over his own crossbar.

River had been inferior but improved. Their first real attacking move was also a brilliant one as Leonardo Ponzio and Quintero exchanged passes before the latter pulled back for Pratto to sweep home.

The game meandered towards full-time and seemed destined for penalties until Barrios was shown a second yellow card for a tackle on Exequiel Palacios and soon after, Quintero struck.

It was a goal worthy of winning the tournament, as he collected 25 yards out, glanced up and whipped the ball in off the underside of the crossbar.

Leonard Jara almost snatched a late Boca goal but his shot nicked the outside of the post. Then, with Boca's goalkeeper Esteban Andrada up for a corner, River added the final touch.

Martinez ran the ball into the empty net and River's substitutes and staff were already pouring onto the pitch to begin the celebrations.