Corals In The Depths Of His Mind, Canines On The Expanse Of His Canvas: Meet N.K.P Muthukoya, One Of India’s Pioneering Surreal Painters

Lakshadweep-born Delhiite N.K.P. Muthukoya is one of India’s pioneering surreal painters. At age 76, the artist, who spent formative years in Kerala and Tamil Nadu, looks back to narrate a string of experiences—romantic, real and sometimes dark. 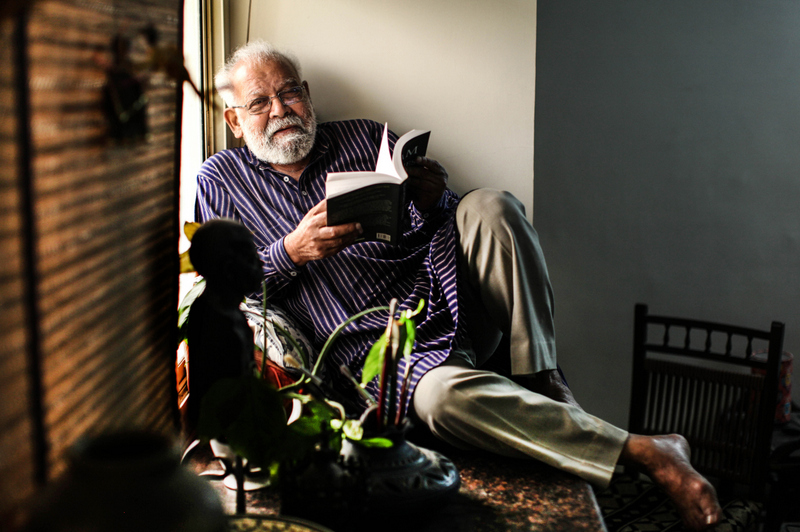 At the Madras Government College of Fine Arts way back in 1965, N.K.P. Muthukoya began experimenting with a genre that had no precedence in India’s modern art. Morbidity defined the mood of his strokes on the canvas, the theme centred round death and the images looked largely weird by conventional standards. The student’s style was something that didn’t please many, including the institution’s head K.C.S. Paniker, an iconic figure in metaphysical and abstract painting. A couple of such Muthukoya works made their entry into a landmark show in the capital that year. The Lalit Kala Akademi’s national exhibition described the two paintings as “strange inclusions” along with that of a work by Calcuttan Bikash Bhattacharjee, who was the age of Muthukoya from Lakshadweep. The art world subsequently acknowledged them as India’s first surreal modern paintings on public display. Bhattacharjee (1940-2006) did say that he was influenced by European surreal master Salvador Dali, but the Bengali painter subsequently focused on depicted the average middle-class people of his eastern state. Muthukoya , now 76, too goes for an occasional sidetrack by doing watercolours featuring the sights of his native island and neighbouring Kerala where he spent his schooldays. Yet the artist, who lives at Noida in the National Capital Region, continues to love with surreal paintings. His paintings at the 52-year-old Lalit Kala show were medium-size and multi-coloured, the artiste recalls. “They would’ve been 3ftx4ft each. My fellow students and others in Madras pooled in resources to send them to Delhi, where the art circles noted them as ‘abruptly different’,” he adds. “It’s another matter that Paniker wasn’t very happy with them. He found them not very rooted in Indian tradition or ethos.” Muthukoya denies that his works those days were a result of a Western influence. Also, he is full of admiration and gratitude for Paniker, who had effectively helped him become a student at the Madras college where he joined the six-year course in 1960. “The entrance test was for five days, and I had reached one full day late. I gate-crashed the principal’s room and told Paniker that I had travelled a long way to reach the place, eager to learn art,” he says. “The principal sported a smile at looked at the HB pencil-tip popping up from my pocket and asked ‘Is with this you are going to sketch?’ He escorted me to the hall where other aspirants were painting. I was provided with art material. I eventually got in.” Muthukoya successfully completed the course, but had no option but to return to Lakshadweep island of Adrott in 1966—as an art teacher in a modest school. An exposure to outside world had broadened his vision about life. Young and angry, he often spoke against “dangerous misinterpretations” of the Quran and “wrong practices” in the name of Islam, inviting the wrath of the mullahs. In 1970, he left for Delhi, where a month later he got a letter from his islander friend: “Had you stayed for a week more here, your life would have been in danger.” Muthukoya, who is technically a matriculate, looks at all that very empathetically in hindsight. “For one, people in Lakshadweep aren’t capable of violence though they can perhaps sound threatening,” he says. “Two, the religious leaders there were only parroting what they had been taught over generations. Their world is so small—literally and figuratively.” In Delhi, after a couple of jobs as an art illustrator—with Children’s World and Caravan magazines—Muthukoya cleared a test that gave him a government job in 1973. At the Directorate of Advertising and Visual Publicity, he went on to become a bureaucrat (chief exhibition officer) before voluntarily retiring in 1998 from the autonomous body.

Winding back to his college days, Muthukoya notes that canines had begun to become a recurrent feature in his paintings as a student. “Well, I used to spend my weekends at Madras municipal corporation, sitting on its compound. There will be these stray dogs around, I used to feel immense affection for them. My religious values as a Muslim didn’t permit me to go near the animals, but all the same their eyes betrayed the love they had for me,” he notes. More than a century-and-a-half before that, in 1797, Spanish artist Francisco Goya had painted his masterpiece The Black Duchess. In an obvious parody to it, “my friends use to make fun of me those days, ‘Koya and the bitches’,” he laughs aloud.

In his second innings in Lakshadweep (the first being as an infant and toddler till 1945 when he left for Malabar where his parents sought better life), Muthukoya’s botheration revolved around human suffering. Images of what he had read about human disasters during the World War II began haunting him intensely. “Heaps of dead bodies, hunger, Nazi-engineered atrocities...” he trails off, relating the sentiments with his surreal works. All the same, Muthukoya says his works weren’t “gallery-genic”. Not many, he notes, would buy a work or invest in it unless the art looks either pretty or was done by a very famous figure, which he wasn’t at any time. “After all, it is an economic activity too,” shrugs Muthukoya. “The new generation of artistes is particularly aware of it. All the same, quite a few among them are very talented.” That said, Muthukoya says he “owes a lot” aesthetically to his city-mate artist K. Damodaran, his contemporary at the college days.

As the winter sun in north India often turns the sky grey, the artist from Lakshadweep remembers fondly the washed firmament that looked like a reflection of the azure sky back in his island. “Well, not surprising, my paintings have a lot of blue shades,” he smiles.