With the new cases, the state's caseload reached 8,96,894, while the death of five patients - one each in Ahmedabad, Surat, Valsad, Rajkot and Bhavnagar - took the toll to 10,142, it said in a release. 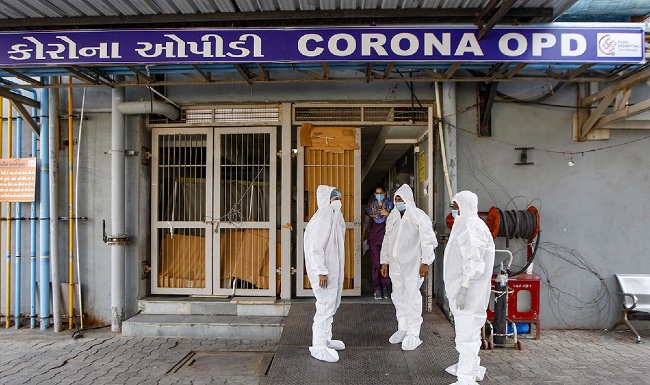 On Wednesday, the state had witnessed 9,941 infection cases and four deaths. At 3,697, Ahmedabad city recorded the highest number of infections, followed by 2,690 in Surat city, 950 in Vadodara city, 440 in Rajkot city and 337 in Valsad district.

As per the latest data available on the COVID-19 dashboard, Gujarat's positivity rate is 9.52 per cent. While Ahmedabad district's positivity rate is 27.40 per cent, Surat district stands second with 16.45 per cent. The recovery count went up to 8,36,140 as 4,285 patients got discharge during the day, the release said, adding that of the total 50,612 active cases, 64 patients are on ventilator support and 50,548 are stable.

As many as 9.44 crore doses of anti-coronavirus vaccines were administered to the eligible population so far, of which 3.11 lakh jabs were given during the day. At present, Gujarat has 138 laboratories to conduct RT-PCR tests to detect the infection.

Gujarat Health Minister Rushikesh Patel on Thursday told reporters that new testing laboratories will be set up in 40 sub-district hospitals across the state soon. While 97,000 beds, including 8,000 ones with ventilators, have been kept ready across the state, if required the government can also set up a new hospital on emergency basis, with the help of DRDO, he added.

Meanwhile, 27 new infection cases and 18 recoveries were reported in the adjoining union territory of Dadra Nagar Haveli and Daman and Diu in the last 24 hours, an official release said. So far, 10,886 people have been found infected in the union territory. While there are 179 active cases, four persons have so far succumbed to the infection and 10,703 have recovered, it said.