After rationing his tea bags, the 61-times capped Milner took to his garden and filmed himself nose down to the lawn clipping the grass with a pair of scissors and a ruler to ensure each blade was the same height 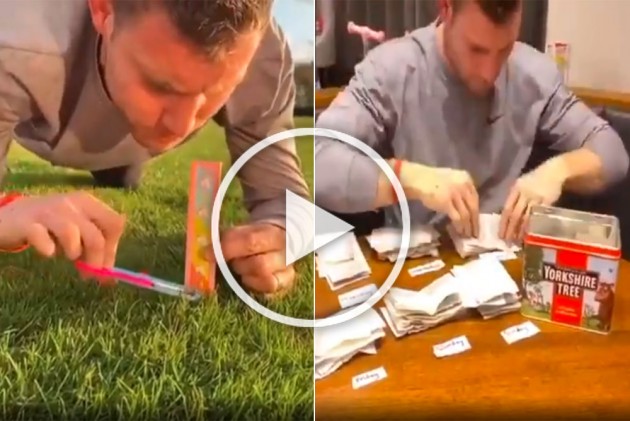 Liverpool star James Milner has become a social media star in playing up to his no frills image by filming himself doing domestic chores whilst the Premier League is suspended due to the coronavirus outbreak.

The 34-year-old former England midfielder first posted images of himself sorting his tea bags one by one as a response to team-mate Alex Oxlade-Chamberlain posting a glamorous video of himself and his pop star girlfriend Perrie Edwards dancing on their stairs.

The players have been left to their own devices after team training was halted due to the coronavirus pandemic.

After rationing his tea bags, the 61-times capped Milner took to his garden and filmed himself nose down to the lawn clipping the grass with a pair of scissors and a ruler to ensure each blade was the same height.

Hey @Alex_OxChambo Barrels of laughs here in the Milner household as well - rationing the tea bags for the weekðÂÂÂÂÂÂÂÂÂÂÂÂðÂÂÂÂÂÂÂÂÂÂÂÂ#crazydays#somuchtogetonwith#notgotthemovestocompete pic.twitter.com/WLDAJjyHOc

"Now the tea bags are sorted I've got time to level out this lawn,'" he tweeted.

"'Wonder if I can borrow Anfield's 'Keep off the Grass sign'."

Now the tea bags are sorted I’ve got time to level out this lawn... wonder if I can borrow Anfield’s Keep off the Grass sign ðÂÂÂÂ¤ÂÂÂÂ#onebladeatatime #productiveday#snipsnip âÂÂÂÂÂÂÂÂï¸ÂÂÂÂ pic.twitter.com/ap510x6mIf

The Premier League is in abeyance since last Friday after both Arsenal manager Mikel Arteta and Chelsea winger Callum Hudson-Odoi tested positive for coronavirus.

Liverpool have been left tantalisingly close to their first ever Premier League title -- they are 25 points clear of two-time defending champions Manchester City with nine matches remaining.

The English Premier League are due to meet on Thursday to consider their options with the postponement of Euro 2020 until next year at least giving them some leeway in resuming the domestic season.