'Yellow alert' category graded action was put in place by authorities on Tuesday, which also entails running of metro trains with only 50 per cent seating capacity and no provision for standing for commuters, in view of rising cases of COVID-19 in Delhi. 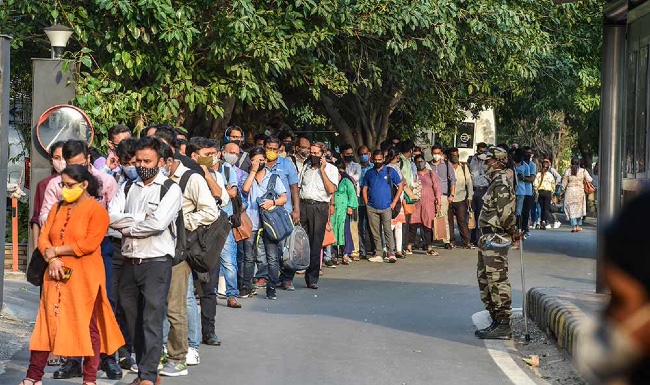 Long queues of commuters were seen outside various Delhi Metro stations for the second consecutive day on Thursday morning after imposition of fresh curbs by authorities to check the spread of COVID-19 in the city.

Meanwhile, anticipating gathering of commuters on New Year's Eve, Delhi Metro authorities have decided that exit from the Rajiv Chowk metro station will not be allowed after 9 PM on that day.

Every year, revellers gather at Connaught Place, the heart of New Delhi, adjacent to the metro station, to ring in the New Year. However, with new Covid restrictions and night curfew in place from 11 PM onwards in Delhi amid a scare of Omicron variant of the coronavirus, the crowd is likely to be small.

"To ease overcrowding on New Year's Eve, exit from the Rajiv Chowk Metro station will not be allowed from 9 PM onwards. However, entry of passengers will be allowed till the departure of the last train from the station. Commuters are requested to plan their journey accordingly," the DMRC said in a statement on Thursday.

In view of the latest guidelines issued by the city government for the containment of coronavirus in Delhi, travel inside the metro will be allowed, with certain restrictions, DMRC officials said.

Since the new restrictions came into force, the queues in the morning time, when metro services are used by a large number of office-goers, were again seen getting longer at some of the stations, officials said, adding they were doing their best to manage the situation to ensure compliance of Covid norms.

On Wednesday, long queues of commuters were seen outside stations at Laxmi Nagar, Akshardham, among others. Many also had taken to Facebook and Twitter to share pictures of such queues outside stations.

Sources said, as offices are open, and not many can afford a private car or other means of transportation every day, so they are bound to use public transport, and if 50 per cent seating capacity rule is in place, such queues will be seen.

Delhi resident Rameen Khan, who takes a metro to reach his office in Gurgaon, said, there was a "massive queue" at the station. Delhi Metro, in a statement, on Wednesday had said, as part of the intensified measures for containing COVID-19 spread, "15 flying squads were deployed across the Delhi Metro network" to ensure that the Covid safety protocols are strictly adhered to by the passengers inside trains and on DMRC premises.

The frequency of checking drives is also being increased to ensure strict adherence to the guidelines, and offenders are also being penalised on the spot, a senior official had said.

"Due to the strict reinforcement of social distancing norms, the passengers are advised to plan their journey in advance and allow for some additional time for their commute. They should travel by the metro only if absolutely essential," the official added.

The DMRC network's current span is nearly 392 km with 286 stations (including the Noida–Greater Noida Metro Corridor and Rapid Metro, Gurgaon).

India saw the highest single day rise of 180 cases of the Omicron variant of coronavirus, taking the total tally of such infections in the country to 961, according to the Union Health Ministry data updated on Thursday.

Delhi recorded the maximum number of 263 cases followed by Maharashtra at 252, Gujarat 97, Rajasthan 69, Kerala 65 and Telangana 62. The national capital on Wednesday had recorded 923 fresh Covid cases, the highest daily rise since May 30, as the positivity rate again breached the 1 per cent-mark (1.29 per cent).