Rubbishing TMC’s claim of increasing popularity, he said the vote share of BJP has been increasing gradually since the party came to power in Tripura in 2018. 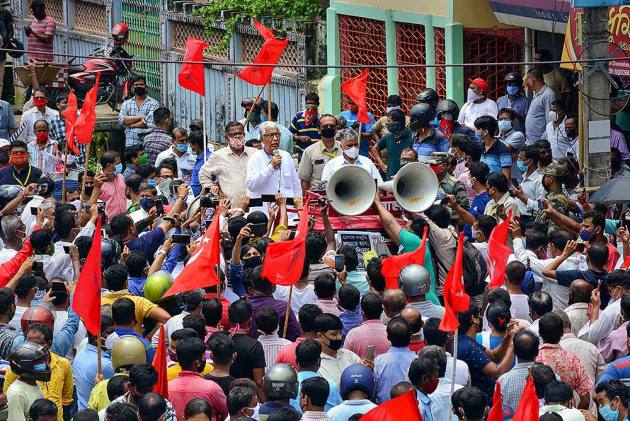 Though Trinamool Congress has claimed that it has secured the second position in terms of votes polled in the recent urban body election in the state, it is CPI-M which has actuually done so, says Tripura Minister for Education, Ratan Lal Nath on Wednesday.

CPI-M, he said, has secured 18.13 per votes in the November 25 election, while the TMC has won 16.39 per cent votes. According to the records of the state election commission BJP secured 59.01 per cent votes, followed by CPI-M and then the TMC.

However, in Agartala Municipal Corporation the vote share of BJP was lesser at 57.39 per cent, followed by TMC which won 20.14 per cent votes and CPI-M 16.06 per cent. On TMC’s claim of securing around 20 per cent votes in the state in just three months of its reaching out to the state, Nath said it had secured 26.4 per cent votes in West Tripura in the 1999 Lok Sabha election where former state chief minister Sudhir Ranjan Majumder was its candidate.

Rubbishing TMC’s claim of increasing popularity, he said the vote share of BJP has been increasing gradually since the party came to power in Tripura in 2018. Tripura CPI-M convener Jitendra Chaudhury too rubbished TMC's claim on vote share and that it has become the "main opposition" against the ruling BJP.

TMC leader Rajib Banerjee had claimed on November 28, the day the votes were counted and the result was announced, that the party had emerged second in the Agartala Municipal Corporation (AMC) and was the main opposition to BJP after bagging 24 per cent votes on an average across Tripura.

Of the total 334 seats in 20 urban bodies, including Agartala Municipal Corporation, election was held in 222 seats as BJP had won 112 of them uncontested. Of these 222 CPI-M had secured only three seats and TMC just one. TMC has on several occasions claimed that it will capture power in the state in the 2023 assembly poll.

Besides Agartala Municipal Corporation election was held in 13 municipal councils and six nagar panchayats. According to the Commission record, the total number of valid votes were
3,97,971, of which 2,38,962 were cast in favour of BJP followed by 73,402 for CPI-M and 66,388 for AITMC.

Congress secured only 2.07 per cent votes, while the 1.72 per cent votes went to NOTA.
Meanwhile, the Leader of Opposition Manik Sarkar (CPI-M) on Tuesday alleged that the civic poll in the state was marred by violence and miscreants sheltered by BJP had rigged it.

“Civic body polls were reduced to mockery and heavily rigged by the miscreants. There was false voting. We are not accepting the poll result, so first, second or third positions in it are not even in our calculations," the CPI-M Politburo member said.

CPI-M will put up resistance and BJP will not be able to rig the 2023 assembly election, he told reporters here on Tuesday night. Sarkar, who was the chief minister of the north eastern state from 1998 to 2018, criticised Prime Minister Narendra Modi for congratulating the Tripura civic poll mandate. "Is it possible the PM doesn't know what is happening here? What can be more shameful? Democracy is being trampled and the people of the state want restoration of democracy. They are becoming discontented," he said.

Nath had claimed on Monday that the civic poll was held peacefully and in a free and fair manner. He had said, "There was no murder, not a single bomb blast, no violence. These things are common in the Left regime".