England were left frustrated and their captain Joe Root miffed after a blunder by third umpire Anil Chaudhary denied them the wicket of India vice-captain Ajinkya Rahane and a DRS review. 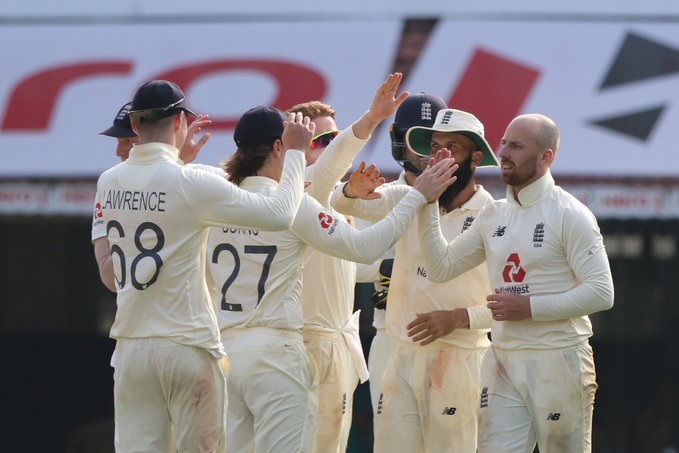 A Decision Review System (DRS) referral was on Saturday restored to England after an error by the third umpire on the opening day of the second Test against India here.

England were left frustrated and their captain Joe Root miffed after a blunder by third umpire Anil Chaudhary denied them the wicket of India vice-captain Ajinkya Rahane and a DRS review.

However, a few moments after it became clear that Chaudhary had erred, England's review was reinstated.

The incident took place in the 75th over of the day when a Jack Leach delivery brushed Rahane's gloves on the way to the forward short-leg fielder Ollie Pope.

As England appealed for a catch off the gloves, it was turned down by the on-field umpire before Chaudhary, failing to read the correct passage of play, also rejected the review thinking that the ball had landed outside the leg-stump and that the visitors had appealed for an LBW.

However, the visitors appeared to clarify that they were appealing for a catch off the glove and not the bat.

Seeing the replays on the big screen, Root was left unimpressed and the skipper also raised the matter with the on-field umpires. Chaudhary turned down that also as England lost a review.

The review was later restored to England as per ICC playing conditions.

As per 3.6.8 of the ICC's playing conditions: A Player Review categorised as 'Unsuccessful' may be reinstated by the ICC Match Referee at his/her sole discretion (if appropriate after consultation with the ICC Technical Official and/or the television broadcast director) if the Player Review could not properly be concluded due to a failure of the technology.

Rahane, though, was dismissed six balls later, bowled by Moeen Ali for 67.

There was also some issue over a stumping attempt by Ben Foakes against Rohit Sharma when he appeared to drag his backfoot to a Leach delivery.

Though TV replays showed Rohit's backfoot to be on the line, the third umpire reckoned some part of it was behind the line and ruled him not out.