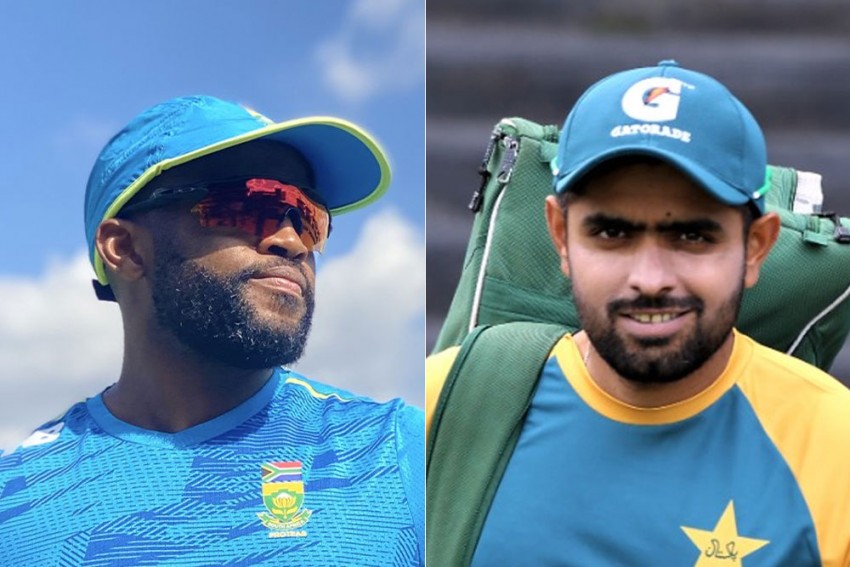 Babar Azam-led Pakistan produced a brilliant, all-rounder performance to beat South Africa by 28-runs in the third and final One Day International match at SuperSport Park, Centurion on Wednesday. The win against the depleted hosts helped the visitors claimed a hard-fought 2-1 win. Put into bat by Proteas skipper Temba Bavuma, Pakistan set a 321-run target, thanks to Fakhar Zaman's back-to-back century (101 off 104) and Azam's unbeaten 94 off 82. Zaman's opening partner Imam-ul-Haq hit played a patient a73-ball 53-run knock as Pakistan got to a confident start in the winners-take-all match. Despite Keshav Maharaj's brilliant spell of 3/45, Proteas failed to check the Pakistan innings, leaking runs towards the end. Hasan Ali played a blinder, hitting four sixes for 11-ball 32. South Africa also got a strong platform with Janneman Malan (70 off 81) and Aiden Markram (18 off 21) posting a 54-run opening stand. Kyle Verreynne (62 off 53) and Andile Phehlukwayo (54 off 61) then hit fifties even as the hosts continued to lose wickets. Mohammad Nawaz and Shaheen Afridi too three wickets each while Haris Rauf got a brace. Pakistan won the first ODI by three wickets at the same venue, then South Africa levelled the series 1-1 after winning the second math by 17 runs at the Wanderers Stadium, Johannesburg. They will now face off in a four-match T20 International series, starting Saturday (April 10) in Johannesburg. Catch highlights and cricket scores of the third ODI cricket match between South Africa and South Africa:

5:12 PM IST: Pakistan set a 321-run target for South Africa in the third and final ODI match. Fakhar Zaman (101 off 104), who scored a back-to-back century, and Imam-ul-Haq (57 off 73) laid a solid foundation for Pakistan after the Proteas won the toss and opted to bowl first. Then, the visiting skipper Babar Azam hit an unbeaten 94 off 82 balls to give the innings further impetus. For the hosts, Keshav Maharaj took three wickets, while Aiden Markram got a couple.

Legspinner Usman Qadir will debut for Pakistan. He is son of the late Abdul Qadir. For South Africa Rassie van der Dussen has been ruled out due to injury.