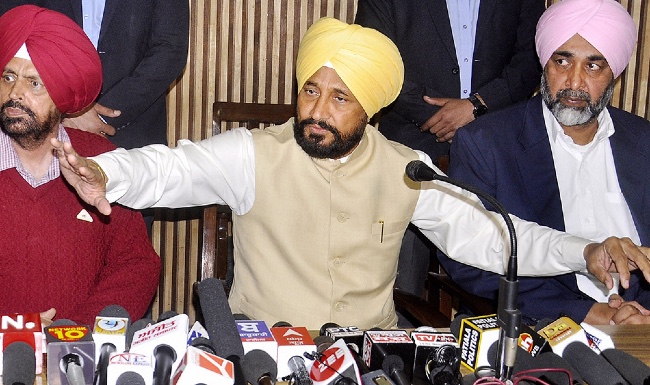 In what is being seen as a veiled jibe at Punjab Congress president Navjot Singh Sidhu, CM Charanjit Singh Channi on Friday asked policemen not to bother about who says what and said criminals wet their pants on seeing them.

Addressing a function in Jalandhar's Punjab Armed Police (PAP) complex, Channi without taking any names told police personnel to perform their duty irrespective of who says what.

"There may be 100 people saying anything against me but I am moving forward with positive thinking. I have to work for the welfare of common people and likewise our police force too has to work for their welfare," he said.

He said if any criminal element raises an evil eye against the police force, or if anyone speaks against them and uses any wrong language, then he considers it being done against him and his government.

Hailing the Punjab Police for maintaining peace, law and order and earlier eliminating terrorism in the state, Channi said the sight of a Punjab policeman instils fear in criminals. "Those who are criminals and anti-social elements, their pants become wet on seeing a Punjab policeman," said Channi.

Channi said he wants to tell anti-national elements and those trying to spread anarchy by carrying out bomb blasts that the Punjab Police is that force which eliminated terrorism from the state and which has always "defeated nefarious designs of inimical forces by even not caring about their own lives".

He told police to ensure that no innocent is ever harassed whereas, anyone who is criminal or has done anything wrong, he should be dealt with as per law. Channi also announced a slew of incentives for police personnel. The chief minister said the service in armed forces and police is a challenging job and only those people who have zeal to serve the country and its people join these forces.

He said the state government fully recognises the immense contribution of the Punjab Police in socio-economic development of the state and added that no stone will be left unturned for the welfare of police personnel.

Channi, accepting a major demand of the police personnel, announced to restart uniform allowance from coming year, for which expenses will be borne by the government. He announced free travel for on duty cop in government buses.

The chief minister said the bomb disposal unit of police put their life in peril during discharge of duty, so the state government will provide risk allowance to them. He also announced to enhance the diet money for sportsmen in the Punjab Police from existing Rs 150 to Rs 250 per day during camps.

Channi also announced ground renovation in the PAP campus at a cost of Rs 1 crore to boost sports. Channi said Police Sanjh Kendras will be opened at Amritsar and Mohali airports to facilitate NRIs coming into the state.

Channi also announced to enhance the police welfare fund from existing Rs 10 crore to Rs 15 crore from next budget. While lauding the services rendered by the police force in maintaining peace and law and order, Channi said the nation's progress cannot be imagined without them. Channi expressed hope that police will uphold its rich tradition of serving the state by wiping out curse of drugs from the state.

He said in wake of coming elections, some forces inimical to the state are hell bent upon disturbing the hard-earned peace of Punjab. Punjabis have always fought the nation's war to protect its unity and sovereignty, he said, adding that now also they will be at forefront to serve the nation.

Channi expressed hope that with support and cooperation of people, these challenges will be overcome soon. Earlier, in his address, Deputy Chief Minister Sukhjinder Singh Randhawa hailed the Punjab Police for rendering exemplary service to the nation.