It is a final very few people could have anticipated four weeks ago, when the competition in Russia was just beginning. 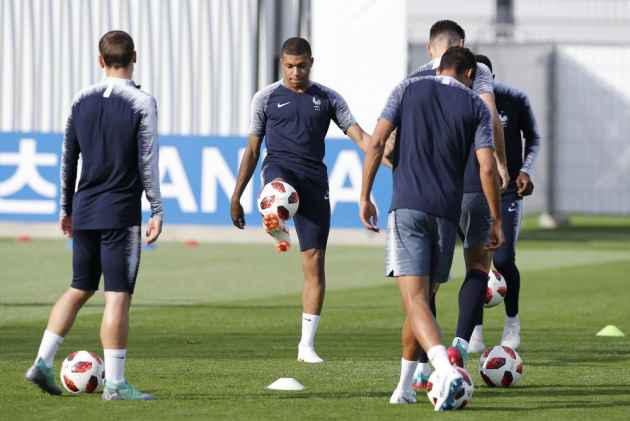 A month on and 63 games later, the 2018 World Cup reaches its climax on Sunday as a young France side spearheaded by Kylian Mbappe and Antoine Griezmann look to win the trophy for the second time when they take on Croatia in Moscow.

It is a final very few people could have anticipated four weeks ago, when the competition in Russia was just beginning.

Lionel Messi, Cristiano Ronaldo and Neymar have all gone home. So have the traditional powers of the international game -- Germany, Brazil and Argentina.

Instead it is a gifted French side with the second-youngest squad at the tournament, embodied by the lightning-quick Mbappe, who face a Croatian team inspired by Luka Modric, arguably the finest midfielder in the world at the moment.

Perhaps many neutrals will be disappointed that it has not come down to a clash between two genuine giants of the game, or that there is no South American presence.

It is just the second time that none of Brazil, Germany, Italy or Argentina have made the final, after Spain's win over the Netherlands in 2010.

A tournament that will be remembered for the colourful presence of hordes of Latin American supporters has a final between two European sides after the continent exerted its power in the latter stages.

But this is still the World Cup final, and for France there is the possibility to join Argentina and Uruguay in winning the trophy for the second time, after 1998.

Back then, Didier Deschamps was the captain. Now he is the coach, and he can become just the third man to win the trophy as a player and a manager, after Mario Zagallo and Franz Beckenbauer.

The game of our lives'

"We are so close to the trophy that we want to touch it. This is the game of our lives."

Beaten on penalties by Italy in the 2006 final, France's hunger is all the greater after the agony of their defeat as hosts against Portugal in the Euro 2016 final.

"It serves a lesson to us, and it means we know what it is to play in a final," added Matuidi.

Half of France's team is different now, however, with Mbappe having burst onto the scene. His explosive performance in the 4-3 win over Argentina in the last 16 lit up the competition, but apart from that France have played like a Deschamps side, with the emphasis on defence.

Les Bleus laboured through their group, beating Australia and Peru by the odd goal and drawing with Denmark in the only goalless game of the tournament.

They have since proved too strong for the Argentines, Uruguay and Belgium, and they are rightly favourites in the final, which is a repeat of the 1998 semi-final.

Back then, two Lilian Thuram goals sunk a Croatia team playing in their first World Cup as an independent nation. Twenty years on, this side have written their own history and the nation of just over four million people is the smallest to reach the final since Uruguay in 1950.

After winning all three group games, outclassing Argentina, they have beaten Denmark and Russia on penalties and defeated England in extra-time in the semi-finals.

It has been a gruelling, exhausting run for Zlatko Dalic's team, and they must rouse themselves for one last effort.

"We took the difficult path, probably we will be the only team at a World Cup to have played eight games to get to a final if you tally up all the minutes," admitted Dalic. "It is a once-in-a-lifetime opportunity. It has been difficult for us but I am sure we will find the strength and motivation."

The great, cavernous Luzhniki, by a bend in the Moscow River, will be the scene of the drama, but the biggest celebrations will take place on the streets of the winning country.

And the Croatians are confident most of the world will be supporting them.

"I have this feeling there will be hundreds of millions rooting for us on Sunday," said Ivan Rakitic.