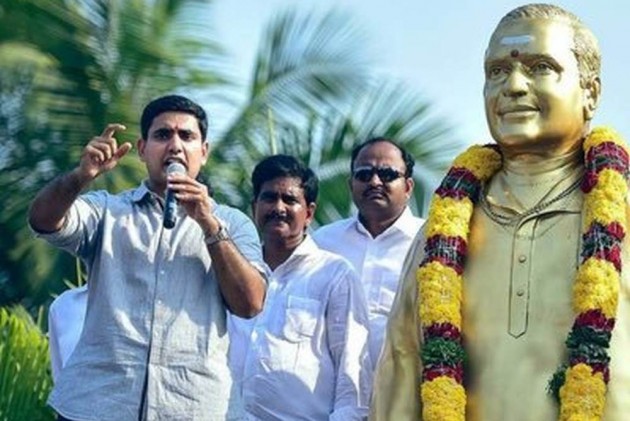 Andhra Pradesh Chief Minister N Chandrababu Naidu's son Nara Lokesh, who is soon going to be a part of his cabinet, is making  headlines over a shocking increase in his declared assets in merely five months.
According to a newspaper report, Lokesh, who filed his nomination papers for MLC elections on Monday, declared his total value of assests at 329.52 Cr including 273.84 Cr in movable assets and 56.52 Cr in immovable assets. Whereas, the value of his assets susbmitted to the EC in October '16 was much less at a mere 14.50 Cr. Naidu and his family members together owned assets of Rs 74 crore, said the report.
The sharp increase in the assets, which is more than 20 times what he had declared five months ago, has raised many eyebrows. But, the leader was quick enough to come out with and explanation for this rapid increase in wealth.
According to an NDTV report, a large part of his wealth lies in his shares in Heritage Foods, which has interests in agriculture and dairy and runs bakeries. Apparently he sold its retail business in November to Kishore Biyani's retail chain, which includes Big Bazaar supermarts. In October, he said they were worth about 2 crores. Now, in his election papers, he says they're worth 273 crores.
Lokesh's office said that the starking difference is because the price listed in October was that on which the shares were acquired and not the market value. But now, in keeping with the Election Commission's rules, he's shown their market value. If he had done that in the first place, the value of the shares would have increased by a far more modest margin - 215 to 273 crores, said the report.