Government wakes up to the threat of cyber crime that lies outside the conventional paradigm of terrorism, but has the potential to do incalculable harm. 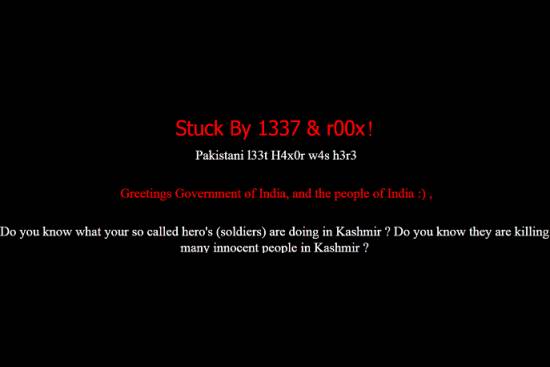 In the night of November 6, 2014, Pakistani hackers defaced websites of 22 Government departments and organisations in India. On the defaced websites, the hackers identified themselves as ‘1337 & r00x! - Team MaDLeeTs', greeted the Government of India, and levelled a range of allegations against the Indian Army in Kashmir. "We are not asking for Kashmir. We ask for peace. Nothing deleted or stolen. Just here to deliver my message to the government and the people of India," the hackers wrote, signing off with "Pakistan Zindabad" (long live Pakistan).

On November 1, 2014, Pakistan-based hackers, calling themselves 'Pakistan Cyber Mafia Hackers', hacked two websites of Gujarat Government— the official website of the Commissionerate of Higher Education (www.egyan.org.in) and the official website of the Agricultural Produce Market Committee of Ahmedabad (www.apmcahmedabad.com). The hackers put their logo and some text on the homepages of these websites, which read: 'Hacked by Pakistan Cyber Mafia Hackers', 'Feel the power of Pakistan', 'Pk_Robot was here' and 'Pakistan Zindabad'.

These incidents are the most recent in a rising trend. Indeed, on July 14, 2014, Communications and IT Minister Ravishankar Prasad, in a written reply to the Lok Sabha (Lower House of Indian Parliament) disclosed,

The threat of cyber crime lies outside the conventional paradigm of terrorism, but has the potential to do incalculable harm. Indeed, even sustained low grade attacks impose cumulative costs that can be prohibitive. Cyber terrorism, moreover, is not only limited to paralysing computer infrastructures; it also includes the use of computers, the Internet and information gateways to support and organize traditional forms of terrorism, such as bombings and suicide attacks. The most common use of cyber space by terrorists is for secret communications, as well as designing and uploading websites on which propaganda can be pasted, at least occasionally masking secret missives. Direct cyber terrorist attacks use hacking, computer viruses, computer worms, e-mail related crime, denial of service attacks, etc.

India and the United States (US) have decided to launch an all-out war against terror outfits and to annihilate them in the virtual world as well. Worried by the increasing presence of terrorist organizations in cyberspace, an Indo-US Joint Working Group (JWG) on cybercrime has been activated to dismantle the virtual command centres of terrorist networks across social networks, Indian Government sources stated, "The decision to activate the JWG was taken after weighing threat perception of outfits like IS [Islamic State], al Qaeda, AQIS [al Qaeda in the Indian Subcontinent], Tehreek-e-Taliban Pakistan (TTP), Indian Mujahideen (IM) and JMB [Jama'atul Mujahideen Bangladesh] etc., in the cyberspace."

Though such a pattern has long been in evidence, there has been a significant rise in high profile terrorist outreach attempts through the Internet in the recent past, particularly with the emergence of the IS, and the very sophisticated media campaigns this group has deployed. For example, in a 20-second-long audio statement titled 'A message to the Mujahideen and the Muslim Ummah in the month of Ramadan' released on July 1, 2014, Abu Bakr al-Baghdadi, the IS 'chief', mentioned that Indians, among a host of other nationalities including Chinese, American, French, German, Australian, etc., figure among IS fighters. Another 11-minute-long IS propaganda video featuring a Canadian youth, who identifies himself as Abu Muslim, and uploaded on the internet in the first week of August 2014, clearly underlines IS attempts to reach out to Indian youth, as the video has been subtitled in Hindi, Tamil and Urdu.

Similarly, on September 3, 2014, al Qaeda leader Ayman al-Zawahiri, in a 55-minute video posted on the Internet, announced the launch of a new wing in the Indian sub-continent, AQIS. Zawahiri described the formation of AQIS as “a glad tiding for Muslims in Burma, Bangladesh, Assam, Gujurat, Ahmedabad, and Kashmir" and claimed that the new wing would 'rescue Muslims' there from injustice and oppression.

Cyber space has also been exploited by extremists to spread violence and unrest across India. Cyber wing officials investigating communal violence that erupted in July 2014 in the Bareilly district of Uttar Pradesh (UP), as reported on August 5, 2014, found that the Students Islamic Movement of India (SIMI) was possibly involved in sending controversial pictures to some Facebook users in Bareilly, which led to communal violence in the Meera Ka Paith locality. The origin of the controversial Facebook posts was traced to Secunderabad, Karmagunda and Madanpet— all in Hyderabad (capital city of Andhra Pradesh and Telangana)— where SIMI is known to have a considerable base. The officials also found evidence that funds were provided by some banned militant outfits from Jammu and Kashmir, to foment trouble in Bareilly.

Earlier, in 2012, cyber space was used by anti-national elements during the Assam communal strife. Then union home minister (UHM) Sushilkumar Shinde had noted on September 6, 2012, "It is unfortunate that the recent violence caused by the ethnic groups in Assam has been given communal colour... There is an increasing evidence of resort taken by terrorists to the cyber space domain."

Similarly, the 2013 riots in Muzaffarnagar (UP) were aggravated by the use of social media networks by suspected terror groups. On November 21, 2013, Shinde had observed, “More recently, the Muzaffarnagar riots were fanned by similar misuse (of social media).”

There is mounting evidence that the abuse of the Internet against India is substantially orchestrated under the aegis of Pakistan's external Intelligence agency, the Inter-Services Intelligence (ISI). A classified note of a high-level security review meeting held in New Delhi in September 2012, noted, "The ISI is now working on a bigger game-plan in training terrorists in the use of cyber and computer technology as the Pakistani agency feels India is not fully equipped in dealing with incidents of cyber war or attack." Importantly, the note observed, the training given to subversive elements by ISI’s cyber experts played a key role in spreading hate campaigns through MMS [Multi-media Messaging Service] and SMS [short message service], targeting people from the Northeast in the wake of ethnic violence in Assam. The note warned that this trend would only increase in days to come, and this was also the reason why ISI was increasingly stressing the recruitment of more educated youth by Islamist terrorist formations. An unnamed Indian intelligence officer stated, further, “It is almost certain that the Pakistani agency was behind the recent cyber attack on India, at least indirectly. Having tasted success they will try it again in future and on a much bigger scale. So we must be prepared to deal with this challenge.”

According to a union ministry of home affairs (MHA) document, till September 15, 2014, the country witnessed 479 riots in which 107 people were killed while another 1,697 people sustained injuries in the current year.

Indeed, concerned at the abuse of cyberspace by terrorist groups, the union home minister (UHM), on June 17, 2014, directed the MHA to explore the possibility of setting up specialised cybercrime units in each of the country’s 671 districts. Again on November 4, 2014, while participating in the 100th General Assembly Session of Interpol in Monaco, UHM Rajnath Singh underlined the role of information technology to bring about even better control in the field of cyber security, and preventing misuse of internet social media for spreading extremist ideologies and radicalisation.

The Cyber Security Initiatives taken up by the Indian government include the setting up of the National Informatics Centre (NIC), a premier organisation providing network backbone and e-governance support to the central government, state governments, union territories, districts and other governments bodies; the Cert-In, to "ensure security of cyber space in the country by enhancing the security communications and information infrastructure, through proactive action and effective collaboration aimed at security incident prevention and response and security assurance"; the National Information Security Assurance Programme (NISAP), for protection of the government and critical infrastructures. Further, the Indo-US Cyber Security Forum (IUSCSF) seeks to establish an India Information Sharing and Analysis Centre (ISAC) for better cooperation in anti hacking measures; an India Anti Bot Alliance to raise awareness about the emerging threats in cyberspace, under the aegis of the Confederation of Indian Industry (CII); and to chalk out ways to intensify bilateral cooperation to control cyber crime in the two countries.

The Indian government has also undertaken various initiatives to strengthen cyber security. On March 25, 2014, the Central Bureau of Investigation (CBI) signed a memorandum of understanding (MoU) with Data Security Council of India (DSCI) with a view to seek expert services from the latter in managing the challenges in cybercrimes and updating officials with the latest technology. Nevertheless, these measures, in addition to earlier initiatives, have failed to adequately deal with the threat, which is approaching alarming levels. On October 31, 2014, while emphasising the severity of the cyber crime threat, UHM Rajnath Singh stated, "It can hit anyone, anywhere and anytime."

Cyber crime and cyber terrorism have now emerged as a national priority, and this is widely acknowledged in the policy establishment. It remains to be seen how long it will take such recognition and concern to be translated into effective action and institutional development to construct and implement a comprehensive cyber security paradigm within India's counter terrorism strategy.