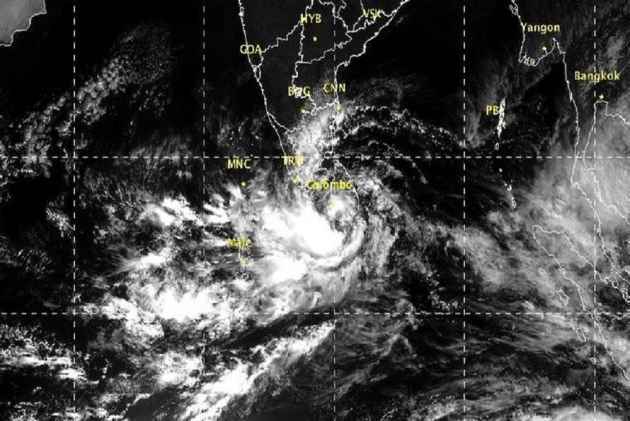 A deep depression over the South-West Bay of Bengal in the Comorin area snowballed into a cyclonic storm 'Ockhi' on Thursday morning and is expected to cause moderate to heavy rainfall in the southern parts of India in the next 48 hours.

The cyclonic storm occurred 60 km south of Kanyakumari and 120 km south-west of Thiruvananthapuram.

According to a report by NDTV, 4 people were killed in coastal Tamil Nadu.

The system is very likely to barrel west-northwestwards towards the Lakshadweep Islands and intensify further into a severe cyclonic storm during next 48 hours.

In its wake, authorities have warned of rainfall in most parts of the southern peninsula, as heavy to very heavy rainfall at isolated place are very likely over south Tamil Nadu, south Kerala, and Lakshadweep Islands.

Director of India Meteorological Department, Balachandran told media that Kanyakumari, Tirunelveli, and Virudhunagar will receive heavy rainfall, while few spells of rain with intermittent gap is expected in Chennai.

In addition, Gale wind speed reaching 65-75 kmph and gusting to 85 kmph are very likely along and off South Kerala during next 48 hours, and along and off south Tamilnadu during next 24 hours, a press statement said.

Squally winds speed reaching 55-65 kmph and gusting to 75 kmph are very likely along and around Lakshadweep Islands during next 12 hours and will increase thereafter with wind speeds becoming 80-90 kmph, gusting to 100 kmph from tonight.

Sea conditions would be very rough to high over and around Lakshadweep Islands during next 12 hours and high to very high during subsequent 48 hours.