Dalit Vs Dalit: Meira Kumar Beat Mayawati, Paswan In The Past, Can She Repeat The Magic?

It’s going to be a direct fight between two Dalit candidates, since the NDA’s candidate Ram Nath Kovind is also a Dalit. 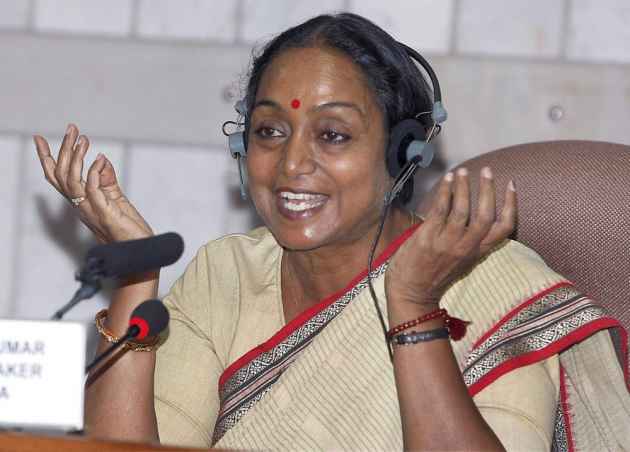 Meira Kumar created history in 2009 when she was elected the first woman Speaker, and that too unopposed. After eight years, she will contest for the post of President of India, the nation's first citizen.
It’s going to be a direct fight between two Dalit candidates, since the NDA’s candidate Ram Nath Kovind is also a Dalit.

The Congress, under the leadership of Sonia Gandhi, has always tried to promote woman candidates.
In the United Progressive Alliance (UPA)-I, Pratibha Patil was the candidate against National Democratic Alliance’s (NDA) Bhairon Singh Shekhawat for president’s post. In the subsequent Presidential election in the UPA-II, Meira’s name did surface in some internal discussions of the Congress but Pranab Mukherjee was the official candidate. So, Meira becoming the official candidate for the Presidential post this time is no surprise.
Contesting against other Dalit leaders is not new to her.
In 1985, Meira made two Dalit political leaders, Mayawati and Ram Vilas Paswan, bite dust in Uttar Pradesh state’s Bijnore by-elections.
Besides, she has been an elected representative in Parliament.
Daughter of Jagjivan Ram, Meira served in the Indian Forest Service (IFS) and can speak in many languages, including Spanish. In fact, she gave a speech in Spanish in one of the Latin-American countries which was much appreciated.
So, Meira has the background of being a diplomat as well as an elected representative in Parliament.
As the Lok Sabha Speaker, her interpersonal skills in running Parliament effectively and breaking logjams between ruling party and opposition had always been appreciated.
Her sober and suave way of handling opposition on issues related to the 2G scam in Parliament, without reacting loudly is still remembered amongst Parliamentarians.
She was the first Speaker to take a delegation to Pakistan under bilateral exchange of parliamentary delegations in 2012. The delegation met then Pakistan president Asif Ali Zardari and then prime minister Syed Yousuf Raza Gilani.

In fact, her rapport with her counterpart in Pakistan, Fehmida Mirza in the South Asian context was much appreciated. She floored the audience in Pakistan by interspersing her speech with Urdu couplets. She is known for her Hindi and Urdu poetry also.
She won the 11th and 12th Lok Sabha elections from Karol Bagh constituency in Delhi. She lost in the 1999 Lok Sabha elections, but bounced back in her father’s constituency – Sasaram -- in Bihar and went on to become the social justice and empowerment minister at the Centre in 2004.
She was briefly inducted in the Union cabinet as the water resources minister in 2009 before being elected as the Lok Sabha Speaker.