One of the assailants videographed the whole episode while another one was heard asking to make it go ‘viral’. 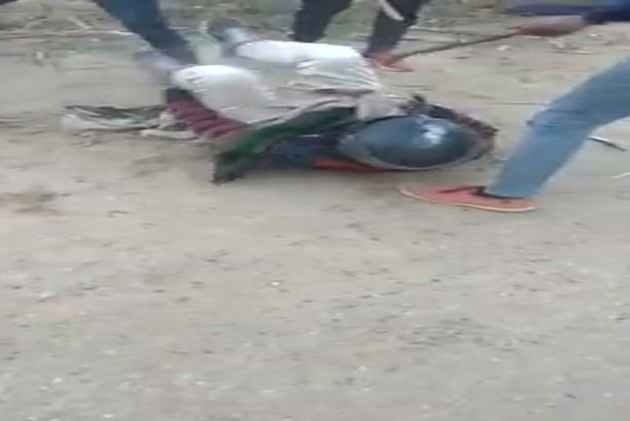 A Dalit youth was thrashed and forced to chant "Jai Mata Di" in Uttar Pradesh’s Muzaffarnagar after he allegedly torn posters of Hindu Gods and replaced them with pictures of BR Ambedkar outside Dalit houses in Purkazi area.

A video of three men beating him with sticks, hurling abuses and kicking him has gone viral on social media. The police have lodged an FIR and launched a manhunt after the video clip, recorded by a fourth assailant on last Sunday, began doing the rounds on social media.

According to a report  by The Indian Expres, the police have identified the victim to be a dalit man in his 20s from  Muzaffarnagar.

The Times of India reported that the rightwing activists forced him to say “Jai Shri Ram” because he had earlier torn posters of Hindu gods and replaced them with posters of BR Ambedkar outside houses of Dalits in Purkazi area.

The victim, identified as Vipin Kumar, a shopkeeper in Kelanpur village in Muzaffarnagar, was coming home on his motorcycle when he was “ambushed” by four men from a neighbouring village and beaten, his family said.

“We are speaking to the victim and his family members and the accused have been identified as three-four Gujjar residents of the area. The incident took place in the the Purkazi police station area,” said senior superintendent of police Anant Deo, added The Indian Express report.

The video shows a man wearing a black helmet lying on the ground, being beaten and kicked by at least three men, while a fourth person records the incident. At one point in the clip, the man’s helmet is pulled off as the three assaulters ask him to repeat “Jai Mata Ai’. One of the assailants asks another person to record the incident and make it go “viral”, while another person tells the youth, “We don’t criticise your Ambedkar, do we? Why did you do it to ours?”

An FIR was registered under IPC sections 307 (attempt to murder), 295A (deliberate and malicious acts, intended to outrage religious feelings of any class by insulting its religion or religious beliefs) and sections of the SC/ST Act and IT Act.

PTI reported that the case was registered against accused Rahul, Dhiraj, Jodha and Kaku, who were absconding, according to the police.

A day after the assault, the Shahid Udham Singh Sena on Tuesday threatened to launch an agitation in Muzaffarnagar if the police failed to arrest the accused by Wednesday.