Dangal: It Sells When Aamir's Career-Best Show Is Topped With Patriotism And Jingoism

The film manipulates the audience's rah-rah emotions at many points, particularly at the end. 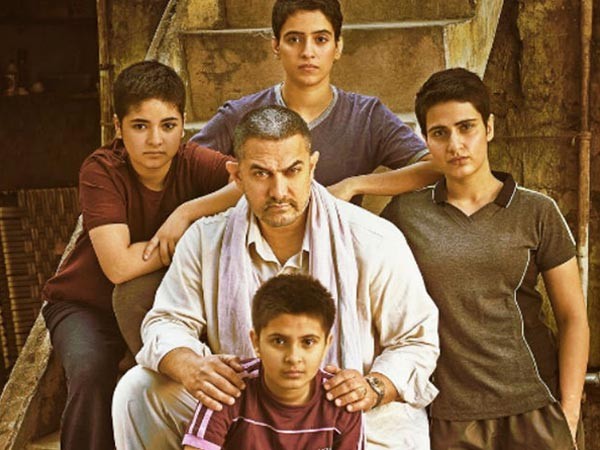 The opening scene of Dangal sets the tone for the film. Former wrestling champ, Mahaveer Singh Phogat (Aamir Khan) is challenged in his office by a newbie wrestler. In two quick moves he downs the opponent, as the television runs a commentary on a bout happening elsewhere. “You are good, if you defeated a state champion,” says the loser. “Don’t feel bad,” replies Phogat, “you got beaten by a national champion.”

This is Phogat’s bugbear—after winning national bouts, he was forced by his father to take up a job; he regrets he could not win a gold medal for India at an international forum. Phogat wears that air of disappointment around him like an invisible cloud, more so, because the son he hoped would fulfil his dream does not appear; four daughters do, in spite of the tips offered by the entire village to ensure a male child!

When he finds one day, that the two older girls Geeta and Babita (Zaira Wasim and Suhani Bhatnagar as kids, Fatima Sana Shaikh as and Sanya Malhotra as grown-ups), have thrashed boys who bullied them, it occurs to him, that a medal is a medal, whether a boy wins it or a girl.

He forces the two kids to start training, ignoring their resistance, the protests of their mother (Sakshi Tanwar) and the taunts of the villagers. It is a bit discomfiting to see his behaviour—to force the girls to achieve something they don’t care about is just as bad as discriminating against them. Since the audience knows how the real story panned out, and the characters is played by Aamir Khan with his image of the socially conscious star, the sense of unease is dulled somewhat. However, it does not change the fact that in that feudal set-up, it is a man who makes decisions for the women. Girls are deemed worthy only when they fight like boys and excel at a sport usually associated with men in loin cloths, and the muddy wrestling akhadas. If the girls had wanted to achieve in another field of their choice, their father would probably have stifled their ambition. The status of the wife, the mother of the girls, does not seem to improve at all.

The girls try to rebel at first, but what changes their mind is the wedding of their underage friend, who tells them she’d rather have a father who gives her the status of an aulad (offspring), rather than a man who treats daughters like chattel.

The plot moves in a predictable way, with some genuine and some contrived conflicts (the jealous national coach played by awwrd-winning Marathi actor Girish Kulkarni), what Tiwari has managed to create, is an authentic Haryanvi milieu—the language, costumes, attitudes of rampant patriarchy. That, and a lot of really well shot wrestling bouts, as Geeta and Babita, go on a winning spree, with enough losses to make their rise convincing.

The relationship between the two girls is warm and non-competitive. Babita cares about her sister and about her father equally, and when problems arise between the unbending patriarch and the headstrong Geeta, she plays the peacemaker.  The other charming character is their laidback cousin (Aparshakti Khurrana), who is the family’s support system.

What will undoubtedly swing box-office in the flavour of Dangal—apart from Aamir Khan’s career-best performance-- is its in-built patriotism and just a little dash of jingoism. The film manipulates the audience’s rah-rah emotions at many points, particularly at the end.  Also, with mainstream films taking up the cause of women, and major stars doing the flag-waving, to nitpick would be cussed.