Days After US Cuts Aid, Pakistan Issues Notice Warning Citizens Not To Donate To Terror Outfits, Including Hafiz Saeed's JuD

The move comes barely days after the US suspended about USD 2 billion in security aid to Pakistan to put pressure on it to take decisive action against terrorists, and is seen as a way to ease international tensions. 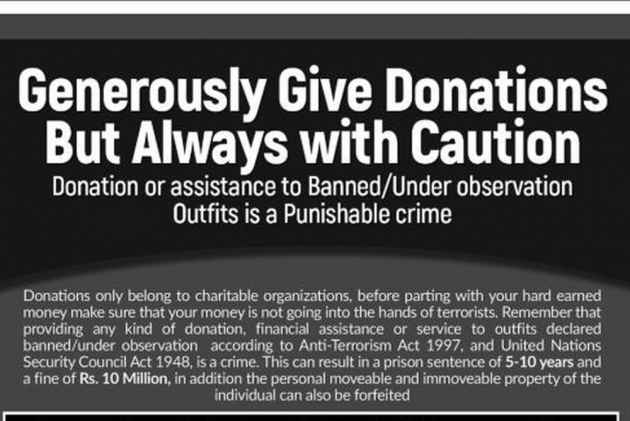 Newspaper notice in Pakistan on Saturday warned its citizens not to donate money to terrorist organisations, including the Jamaat-ud-Dawa (JuD) whose chief Hafiz Saeed was the mastermind of the Mumbai terror attack in 2008.

The move comes barely days after the US suspended about USD 2 billion in security aid to Pakistan to put pressure on it to take decisive action against terrorists, and is seen as a way to ease international tensions.

“Donations only belong to charitable organisations, before parting with your hard earned money make sure that your money is not going into the hands of terrorists. Remember that providing any kind of donation, financial assistance or service to outfits declared banned or under observation, according to the Anti-Terrorism Act, 1997, and UN Act, 1948, is a crime. This can result in prison sentences of 5 to10 years and a fine of up to 10 million rupees" the notice said. The advertisement named  72 organisations, which are banned or under observation for involvement in terrorism, barring them from collecting donations.

The news was first reported by The Hindu.

Pakistanis donate an estimated amount of 650 billion rupees in charity every year, a 2015 study says.  According to a report, 73 percent people consider giving charity in the form of money to mosques and religious seminaries.

Since donating to charitable organisations, and religious seminaries eliminates the chance of knowing where exactly the money is spent, it may be possible that the purpose of the donation and the donatee be different from the one the donor had in mind.

The Jamaat-ud-Dawa (JuD) and the Falah-e-Insaniat Foundation (FIF) has been blacklisted by the Pakistan Interior Ministry, news agency ANI reported.

Providing any kind of assistance to any of the blacklisted organisations financially or otherwise, would be considered a crime henceforth.

The Securities and Exchange Commission of Pakistan (SECP) on Monday ordered to prohibit all companies from donating cash to JuD and FIF, as well as several other such organisations named in a list of banned outfits by the United Nations Security Council (UNSC).

Following the ban, Dastgir had stated that the action against JuD, FIF and other organisations were "linked to ongoing Operation Raddul Fasaad" and were taken so that "terrorists cannot open fire on schoolchildren anymore."

Dogar accused that the minister had caused "immense damage" to the "reputation" of Saeed and JuD by issuing an "irresponsible" statement, the report said.

"The minister has been asked to tender an apology in writing within 14 days, or face litigation," read the notice served by Advocate A K Dogar, on behalf of JuD chief Saeed, under Section 8 of the Defamation Ordinance of 2002, local media reported.