Days Of Wine And Poses

It's my theory that, just like a piece of land that shouldn't be over-cultivated, no city should be over-watered with Culture, and Delhi certainly is a prime victim of this phenomena.

I am now well and truly Book-launched out. I am Multiplexed out. I am Art-openinged out. It is, quite clearly, April-end, and this Dilli Cultural Season is out-lasting all its attractions—a bit like the non-stop schedule of our national cricket team. It’s my theory that, just like a piece of land that shouldn’t be over-cultivated, no city should be over-watered with Culture, and Delhi certainly is a prime victim of this phenomena. Just as there has been a rampant over-greening of the burgh, so there has been an over-dose of the fertilisers of Art, Literature, Cinema, Theatre, Dance and Musics Classical and Non. Enough, I say, craving that time when Nouvelle Delville was an ever so slightly parochial, wannabe, lemme-ketchup too, kinda place, trying to swim with the big shark of Bombay, the old manta ray of Calcutta, the whales of Madras, Hyderabad and Bangalore. 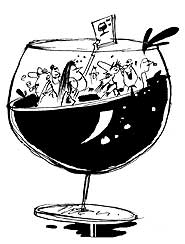 Looking back at the half year that’s just passed since this over-stuffed parantha of a city magazine started coming out ( if you think this is thin, you should see the one they have in Rajkot), what is the one event that I’ve missed out, that is, like, a stand-out gig ( I hate the phrase ‘stand-out’, it reminds me of this teacher at school who would shout "You! Boy! Stand out!", but one must go with the flow of the town so it’s printed here anyway...) that I would want to go to again and again?

Yes, you’ve guessed it: it would be the wine-tasting-cum-wine-manual-for-know-nothings book launch where decent plonk flowed as freely as the conversation. Yes. In fact, I would love to be Gautam Grigio, the author of The Singing Sommelier published by Grenache Presse, standing there on the terrace of Capers, the happening new resto-bar, cordless mic in one hand and cordlessly filling glass in the other. One by one I would trot out wines I had convinced importers of all different feathers to contribute to the evening, and I would encourage people to quaff like there was no tomorrow. "And, after that excellently cheeky St Sarfaty Chardonnay, now to a much deeper part of our palate! Ladies and gentlemen, give a fair shake to this unusual red from the Skvorda region of lower Slatsonia. For my money, I think Uttam Bannerjee has imported a bottling that matches all except the very very best of the French Pinot Noirs for depth and complexity. Priced at....Uttam? Would you say around 600 a bottle?" (Uttam, who’s been planning to stiff people for more like 1,150 per bottle, chokes on his Chardonnay, but, hey, I like to spread happiness!).

Yes, that’s something you don’t see much of in Calcutta or Bhubaneshwar, though, as the evening progresses, you do see more and more of the press boys from Calcutta and Bhub-town. And therein lies the beautiful catholicism of this town: I, a half-Italian half-Ghati am selling wine imported from Slatsonia and Namibia, on the rooftop of a trendy restaurant run by a Hyderabadi, to a bunch of rich Punjabis and Bhaiyas, as the whole event is covered for the media by the aforementioned Bongs and Oris. Now that’s not just Delhi that’s akhha India for you, shining, bubbling and intoxicating, and no pretentious book-launch or art-launch or play premiere is going to match that.