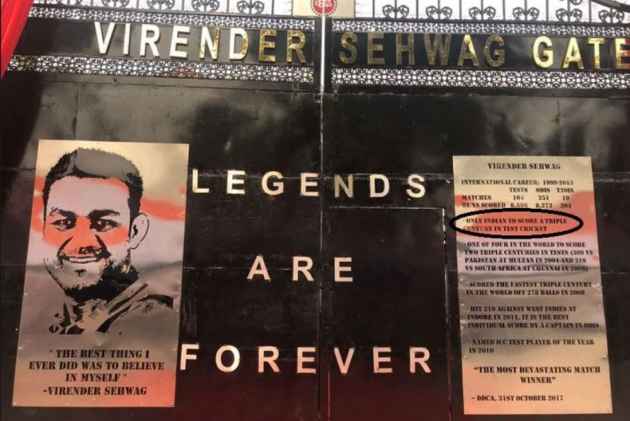 The Delhi District Cricket Association (DDCA) on Tuesday named Gate 2 of the Feroz Shah Kotla Stadium as the 'Virender Sehwag Gate'.
However, there was a goof-up though by the DDCA, which called Sehwag the only Indian to score a triple century in Test cricket. The association forgot that Karnataka's Karun Nair also has a triple ton to his credit. Nair scored a triple century against England in Chennai earlier this year.
Sehwag scored 309 runs against Pakistan in Multan in 2004 and 319 runs against South Africa in Chennai in 2008. He took only 247 balls to score the first triple century.
Nair made an epic unbeaten triple century to power India to their highest ever innings total against a demoralised England in the fifth and final test in Chennai in last year. Nair became the second Indian batsman to score a test triple hundred and his 303 not out helped the hosts post a massive 759 for seven before skipper Virat Kohli declared.
Asked what sets apart Delhi cricket, Sehwag said: "In Delhi a lot of one-day cricket is played in clubs. And by the time these players come to Ranji Trophy they become very tough mentally and they don't find it difficult to get used to the grind."
The 39-year-old Sehwag said he was honoured.
"It is a great honour and today we have a gate named after a cricketer but later we can have dressing room, stands, restaurants and dressing rooms and other things named after cricketers. It's a good thing and positive move from DDCA.
"I had a wish that whenever such a function happens, we should call all the cricketers who have represented Delhi and India," Sehwag said.
Sehwag thanked the DDCA and said this will motivate younger players.
"Any young cricketer will get motivated reading the name. Virender Sehwag played here as a kid and when he left there is a gate named after him so if I can also play for U-19, U-16, U-23 or Ranji for Delhi and then represent India, then a gate, stand or something will be after my name," he said.

Asked to single out that one moment he wished he was part of in Delhi cricket, Sehwag said it was the Ranji Trophy triumph in 2007-08 when they beat Uttar Pradesh in the final.

"One moment I missed was that I was not part of that Ranji Trophy triumphant team. I was playing for the Indian team then. Full credit to Gautam Gambhir, who was leading the team, and Pradeep Sangwan also played really well I remember."

Sehwag recalled a must-win match against Gujarat at the Kotla during his U-19 days.

"We played one U-19 match here -- Delhi versus Gujarat -- and we had to win and qualify. Ashish Nehra and Amit Bhandari played really well in that game, picking up five and four wickets, and though I scored only 50 or 60 runs I still fondly remember that game as we managed t qualify for the knockouts."

Sehwag said he got lots of tips and motivation from former players Bishan Singh Bedi and Mohinder Amarnath.