The DDCA is worried as about 2,000 seats in the Delhi stadium cannot be used for the 10 matches of the ICC World Twenty20 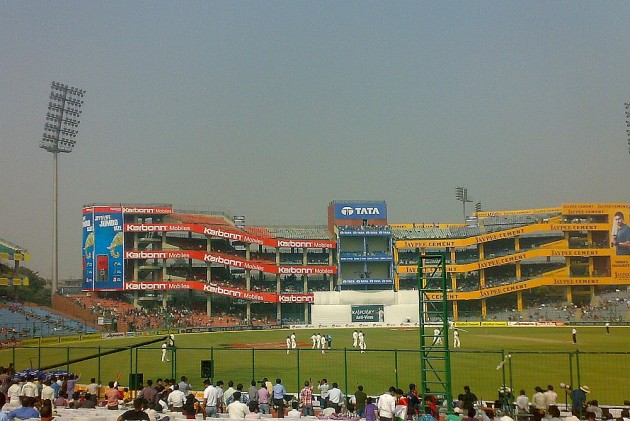 The Delhi and District Cricket Association (DDCA) is set to move a Special Leave Petition before the Supreme Court, apparently seeking its nod to use all the galleries of the Ferozeshah Kotla stadium for hosting the ICC World Twenty20 matches.

The bone of contention is the RP Mehra Block of the stadium that was allegedly constructed a few years ago "without sanctioned plans", and is said to be less than 100 metres from the Ferozeshah Kotla ruins, which the Archaeological Survey of India (ASI) has declared as a protected monument. No structure can be raised within 100 metres of an ASI protected monument.

With the RP Mehra Block facing imminent demolition, following a Delhi High Court ruling, the ICC, the BCCI and, more so, the DDCA are worried as about 2,000 seats in this block cannot be used for the 10 matches of the ICC World Twenty20 being hosted at the Kotla. This includes the crucial men's semi-final match.

Sources told Outlook that the Special Leave Petition was likely to be filed in the Supreme Court either late on Wednesday or Thursday. When filed, it might be heard on Friday, they hoped. A lawyer involved in filing the SLP said that the DDCA's contention before the Supreme Court would be to "treat the matter on merit", after a Delhi High Court virtually ordered demolition of the controversial RP Mehra Block, named after the late BCCI and DDCA president.

If the Supreme Court sees merit and the demolition of the block is stayed — and gives some other favourable order — the DDCA would be able to use the 2,000-odd seats for "commercial use" for the ongoing ICC World Twenty20 matches, and also possibly for the IPL that will be played in April-May, soon after the World Twenty20.

"Our contention before the Supreme Court would be to treat the matter on merit. We are contending that the RP Mehra Block is more than 100 metres away from the 'Kotla Baoli' which is the actual protected monument, and the distance should be measured between the 'Baoli' and the RP Mehra Block," a lawyer involved in preparation of the SLP told Outlook on Wednesday.

The ICC, the BCCI and the DDCA are mainly worried as the RP Mehra Block houses many VIP seats, which would have been occupied by the ICC and BCCI guests during World Twenty20 matches. Now, the DDCA has to relocate these seats elsewhere in the stadium, and that is seen as a problem.

On March 3, a Delhi High Court bench of Chief Justice G. Rohini and Justice Rajiv Sahai Endlaw had dismissed DDCA's application to restore its 1997 petition that had sought a No Objection Certificate from the South Delhi Municipal Corporation (SDMC) for the stadium which was denied clearance by the Archaeological Survey of India due to the 100-metre rule. "You) cannot live from match to match. This is your practice. You demolish and hold a match. It is not a matter of restoration. We do not find any reason," the bench had told the DDCA, making its administrators nervous, just ahead of the 10 ICC World Twenty20 that the Kotla is scheduled to host.

"You demolish this [RP Mehra Block] and hold the match. If it is unauthorised, it has to go. It was held unauthorised and you have kept this pending since 1997. The 1997 writ petition was dismissed twice in default," the bench had pointed out.

With a big question mark hanging over the Kotla as a World Twenty20 venue following this order, retired Justice Mukul Mudgal, appointed by the Delhi High Court to oversee these matches, instructed DDCA officials to not to use the RP Mehra Block commercially, a top DDCA official said. "A few days ago, after proceedings in the Delhi High Court on March 8, Mudgal told us to not to sell tickets or give out complimentary passes for the RP Mehra Block for spectators as there is some doubt about its legality. He also asked us if tickets have been sold they should be refunded immediately," a top DDCA administrator told Outlook.

"Mudgal also instructed us that only the media, including television/radio commentators and the official ICC broadcaster could be allowed to use the RP Mehra Block. Since this block also houses VIP seats, which would have been occupied by the ICC and BCCI guests during matches, Mudgal instructed us that these guests be accommodated on the fourth floor lounge as well as the Corporate Boxes in the same building," he said.

It is learnt that a few top DDCA officials a few days ago had told ICC officials to impress upon Mudgal that relocating VIP seats elsewhere in the stadium would pose a problem for the host association and to request him to help in the re-opening of those seats in that block. It seems that after Mudgal refused to change his stand vis-à-vis his March 8 instructions on the RP Mehra Block, the DDCA, after much thinking decided to move the Supreme Court.

If the Supreme Court gives a favourable ruling, it would be a big relief for the ICC, the BCCI and the DDCA. But if declines, it would a huge setback for the concerned parties, particularly the DDCA, widely known for its mismanagement. While allowing the DDCA to use the Kotla stadium for the ICC World Twenty20 recently, South Delhi Municipal Corporation did not give it permission to use the RP Mehra Block, which was allegedly built "without a sanctioned plan".