My Dear Fellow, The Issue Is Not Jinnah But An Armed, Unlawful, Attack By A Mob

There is no discussion on the breach of security to Mr. Hamid Ansari. Everyone is busy discussing the role of Jinnah in the British period of the Indian history. One feels like screaming, my dear fellow, Jinnah is not the issue. 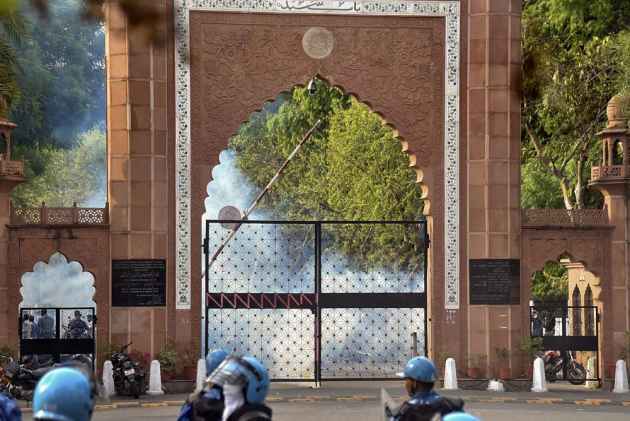 “Aligarh Muslim University on boil as right wingers and students clash”- headlines like this describe what is happening in the AMU for more than one week. Hindi media suggests that it is the obstinacy of the students that has led to a situation of deadlock in the university. Students are sitting on a dharna, faculty is tense and the university administration is walking on a tight rope, trying not to offend the rightwing, nationalist ruling establishment while acknowledging the feelings of the student mass and teachers of the university. Let us try to understand the situation in the AMU.

It all began this time with a demand for an RSS shakha in the university campus. This was to, according to the petitioner, dispel the misgivings regarding the RSS among the AMU community. The move was naturally protested by the students of the university. The record of the RSS and even the present outpourings of its members against the Muslims not exactly make it even a matter of curiosity for the Muslims. Close on the heels of this demand the local MP belonging to the BJP shot off a letter to the Vice Chancellor of the university. He wrote that his sources had told him about the presence of a portrait of M A Jinnah in the university. Expressing shock over the honour thus awarded to a person who divided India, he demanded its immediate removal. The demand made attractive headlines, gave fodder for the prime time slots of the TV channels. How can a central university, run by the money of the tax payers honour someone who was a nation breaker, people wondered with the media.

The university explained that the portrait was not in the offices of the university administration. It hung on the walls of the students’ union hall with the photographs of other stalwarts like Gandhi, Maulana Azad, etc. It was not put up yesterday. It has been there since 1938. The picture of the leader was there because he was awarded life time membership for his services to the nation. So, it was not a secret that the source of the BJP MP had to unearth for him. But to the outside world, with a helping media, it came as a revelation. With shocked and injured nationalist feelings the propriety of the presence of the dead man in the university was questioned.

Meanwhile, other ‘nationalist’ organisations jumped in the fray. A 48 hour long ultimatum was issued to the university to get the portrait removed, failing which it would be removed forcibly. This was a clear threat of violence. Interestingly, its criminality was not noticed. In the light of such a serious threat of breach of peace the district administration and the police did not think it necessary to take any pre-emptive step.

Before the expiry of the announced 48 hours period a mob descended on the campus, escorted by the police force. It reached Babe Syed, very close to guest house number 3. Here Mr. Hamid Ansari, former Vice President of India was put up waiting for a function announced for the day to confer life time membership to him by the students’ union. The mob had fire arms and other weapons which were openly displayed. Students and teachers allege that the mob came firing in the air. The police was a curious onlooker allowing them to vent their nationalist feelings. They raised threatening and abusive slogans.

We have to keep in mind that this violence was taking place very close to the guest house where the former Vice President of India was staying. Police did not try to prevent the armed protesters from entering the campus. They were not in large numbers and could have easily been restrained by the police had it so wanted. The violence of the mob and the inaction of the police naturally agitated the AMU students who feared that the rampaging mob could enter the guest house. They blocked them, seeing the inertness of the police, overpowered 6 of them and handed them over to the police. Instead of taking action against these 6, the police released them. It angered the students. They tried to move to the police station demanding FIR against the identified lumpens. But the procession was heavily lathicharged and tear gas was used to disperse the students.

The media reported it as a clash between the students and the right-wingers in which the police intervened. Clearly this was not the case. The police never took any restrictive action against the armed mob. It did restrain the agitated students forcibly. There is a difference between attack and clash. By using the word clash, the media and the police are trying to bring parity between the armed mob and the students. Its ingenuity is transparent but only to those who are interested in knowing the facts.

What is serious is that there is no discussion on the gravity of the breach of security to Mr. Hamid Ansari. Even well intentioned people are busy discussing the role of Jinnah in the British period of the Indian history. One feels like screaming, my dear fellow, Jinnah is not the issue. The issue at hand is the armed attack by the mob. Some people would say that they were merely expressing their anger. But with arms, by firing in the air? Is it not against the law? Are we to accept it as a legitimate method when used by the affiliates of the ruling nationalist party? Why is still no action against the person who had issued an ultimatum to the university and threatened direct action?

Clearly, the portrait of Jinnah was not violating any law of the land. But the threat by the MP and the subsequent violence by his followers were unlawful.

My mind goes back to the ‘incident’ of the burning to death of Graham Stains and his sons. It was a murder, a ghastly crime. But the then Prime Minister wanted the nation not to focus on it but to have a discussion on religious conversion. The Supreme Court , years later agreed with him when it reduced the punishment given to the murderer saying that the anger against religious conversion had led him to light the fire in which Stains and his sons died. We forgot the crime, remembered the issue of religious conversion. Similarly here the fact of the crime from threat of violence to the actual act of violence is not in discussion. We are spending hours on a figure who had feared that a Hindu majority nation would ultimately corner Muslims and other communities. He seems to be winning the argument.