Advertisement
Home International
FOR THE RECORD

A letter from 345 civil society organisations on the wrong direction of the current WTO talks... 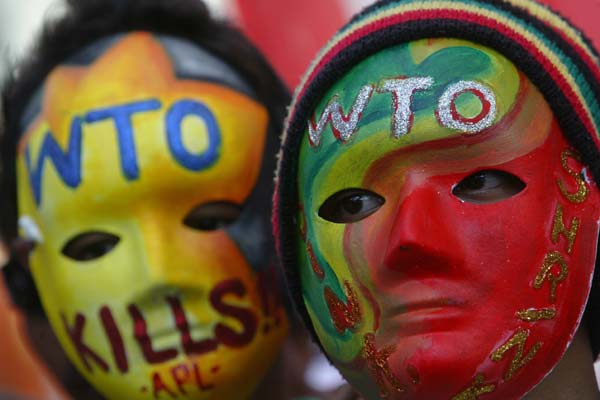 To Members of the World Trade Organization (WTO):

As 345[1] organizations of civil society from over 100 countries of the global North and South, as consumer groups, environmentalists, trade unions, farmers, and other development advocates, we are writing regarding the wrong direction of the current WTO talks, and to urge you to substantially turnaround the negotiations in advance of the December Ministerial in Nairobi. Global trade policy must be evaluated by whether it contributes to global goals such as food security and food sovereignty, sustainable development, environmental conservation, financial stability, expanded access to quality public services, the creation of good jobs, and the reduction of poverty and inequality. Now after 20 years of experience with the WTO and its corporate-led model of globalization, it is clear that this particular model of trade has failed workers, farmers, the poor, and the environment, while facilitating the vast enrichment of a privileged few. Since its mandate is to further liberalization and increase trade, rather than ensuring that trade can be an engine of development and the other goals stated above, it is the wrong institution for governing the global trade system. Unfortunately, some members are seeking to further the failed model and even expand it; thus it is urgent to reverse this direction. The transformation of the system, starting with the amelioration of the worst rules, must be prioritized.

It is well known that most developing countries realized that the conclusions of the Uruguay Round created a set of agreements in the WTO that left them at a disadvantage in the global trade system. Since that time, they have circulated proposals to ameliorate the worst of those imbalances through what came to be known as the "Implementation Agenda." Developing countries did not want a new round of "market access" negotiations launched, which is a position with which civil society concurs. When developing countries agreed to launch a new round in 2001, it was with the specific promise — and mandate — that the round would focus on development issues, which included correcting the existing problems and imbalances in the WTO, with a particular focus on improving the extremely unbalanced agriculture rules. Unfortunately, since then, some developed countries have insisted again and again on relegating the development agenda to the background, while insisting that their "market access" issues rise to the top priority in the negotiations. Thus, nearly 14 years after the launch of the Doha Round, the development issues which members agreed to prioritize still remain unresolved within the WTO. At this time, this imbalance in the negotiations can no longer remain status quo.

Negotiations to further liberalize "trade in services" through the expansion of the General Agreement on Trade in Services (GATS) must be immediately halted. Strong public oversight over both public and private services is crucial for democracy, the public interest and development, as well as for the orderly functioning of the services market. The deregulation of the financial sector which was encouraged in part through 1990s-era rules of GATS led to the recent global financial crisis and the ensuing worldwide wave of recessions. In addition, we particularly oppose the inclusion of any public services such as health care and insurance, water and energy provision, postal distribution, education, public transportation, sanitation, and others that must be operated as accessible, quality public services in the public interest. Before any further services negotiations are discussed, proper assessments of the potential implications for consumers, workers, and the public interest must be undertaken, particularly as they relate to the future development of services for developing countries. For these and other reasons, detailed in a September 16, 2013 letter endorsed by 345 global civil society organizations, we oppose the proposed Trade in Services Agreement (TISA) pluri-lateral and also the potential expansion of GATS within the WTO.

For similar reasons we oppose the continuation of negotiations to further liberalize trade in goods through the Non-Agricultural Market Access (NAMA) pillar. In the negotiations, sectors are being targeted which are of particular interest to developed country corporations, rather than with a focus on export opportunities for developing countries. This would jeopardize job growth and the fomenting of industrial development, particularly in developing countries. The structural transformation that is required for many African countries and LDCs to create jobs and alleviate poverty — key aspects of the proposed Sustainable Development Goals — requires the protection of infant industries, the promotion of added-value exports, technology transfer, and other tools that were used by every developed country on their path to development. In addition, the global jobs crisis in which tens of millions of people remain unemployed cannot be resolved with more liberalization of trade in goods.

Any future negotiations on trade in goods — including those in the NAMA negotiations but also in the proposed pluri-laterals including the expansion of the Information Technology Agreement (ITA-II) and the negotiations on Environmental Goods — must focus on job creation and the Decent Work agenda developed by the International Labor Organization working in conjunction with the global labor movement, rather than on the narrow agenda of reducing corporate taxes. Expansion of the ITA, and the ITA itself, through setting zero tariff targets for industrial products is contradictory to the nature of policy space required to use tariff policy as a tool to advance industrial development and structural transformation of poor economies. Any discussions in regard to non-agricultural market access should focus on enabling the process of industrial development including through reviewing and enhancing flexibilities available to developing countries and through fulfilling the Special and Differential Treatment principle, such as providing essential flexibilities under the Agreement on Trade-Related Investment Measures (TRIMs) that would allow developing countries to use policy tools important for industrial development.

We also alert members that we are strenuously opposed to the inclusion of these "new issues" in a fundamentally flawed WTO that has yet to deal with the foundational flaws of the existing rules. We also understand that there is a pernicious desire on behalf of some developed members of the WTO, to set aside permanently the entire development mandate of the Doha Round, and to replace it with another agenda of issues that would further the profit interests of their corporations. These issues that have been strongly rejected by developing countries in the past, including investment, government procurement, and transparency (the so-called "Singapore issues.") They also include negotiations on e-commerce (which would expand corporate dominance of Internet governance and erode digital privacy and other digital rights); disciplining state-owned industries; and negotiations on environmental goods and services (which simply appropriate the positive connotations of the "environmental" moniker to further liberalization). While there are many aspects of the Doha Round to which we are opposed, failing to fulfill the development aspects while replacing that mandate with a new mandate that focuses solely on the wrong issues is the opposite agenda of what needs to be prioritized in global trade.

And as we have previously argued, development must come before binding commitments on Trade Facilitation. We also understand that WTO members are being pressured to file their ratifications of the Protocol of Implementation for the entry into force of the Trade Facilitation Agreement (TFA). We reiterate our general opposition to the TFA, as we detailed in a letter from global civil society on June 6, 2013, particularly because the TFA carries significant implications at each of the regulatory, institutional, and legislative fronts, would require short-term and recurring long-term costs, and is likely to increase imports in some sectors while not contributing to building the productive and trade capacities of our country. Thus we continue to urge developing countries to delay ratification, and to file only minimal Category A (binding) commitments.

The Right Agenda: Agricultural Transformation and Special and Differential Treatment

Instead, developing countries and Least Developed Countries (LDCs) have made concrete proposals regarding the development mandate, including implementation issues, strengthening and operationalizing Special and Differential Treatment (SDT), agricultural reform, and LDCs issues, and it is these issues which must be re-prioritized as the agenda rather than discussing more "market access" for developed country corporations.

Along with the SDT agenda, members must urgently begin negotiations to change the current rules on trade in agriculture, and in particular to address long-standing concerns about the existing trade-distorting subsidies that developed countries agreed years ago to curtail or eliminate. It is outrageous that developed, but not developing, countries are allowed extensive levels of export subsidies as well as trade-distorting domestic support, and these damaging subsidies on exported agricultural exports must be urgently terminated; countries should not be permitted in the WTO to damage each other’s markets. Likewise, if there are any future negotiations on market access in agriculture, developing countries must be allowed to protect their domestic production; they must have recourse to a full range of self-designated Special Products and an effective and workable Special Safeguard Mechanism, in the event that their markets experience damaging import surges.

On a parallel track, we urge members to immediately agree to a permanent solution on food security, by allowing public stockholding programs for resource-poor farmers to be allowed in the "Green Box." WTO members must move beyond the outrageous blockage by the United States of the proposal to allow the developing countries to engage in public stockholding programs to support impoverished agricultural producers as well as ensure food security for their hungry populations. Members must urgently agree to remove this WTO obstacle to the Right to Food.

In conclusion, any future trade negotiations must focus on the urgent development needs of countries for global trade rules that facilitate rather than hinder development, including the transformation of existing rules on agriculture (including a permanent solution on food security), and the prioritization of Special and Differential Treatment, implementation proposals, and the LDC proposals; and must put aside the "market access" agenda of GATS and NAMA expansion — as well as other developed country corporate agendas. Many of the specific changes that are urgently required of the global trade system are detailed in the WTO Turnaround statement of the global Our World Is Not for Sale (OWINFS) network endorsed by civil society around the world. The first WTO Ministerial in Africa will not be a "success" if it furthers policies that are against the interests of African, LDC, and other developing country development. For Nairobi to be a "success" it must deliver on development and turn around the WTO.