The ‘clear, hold and develop’ catchphrase, and the objectives of ‘territorial dominance’ (or recovery, as the MHA expresses) reflect fantasies, not strategies 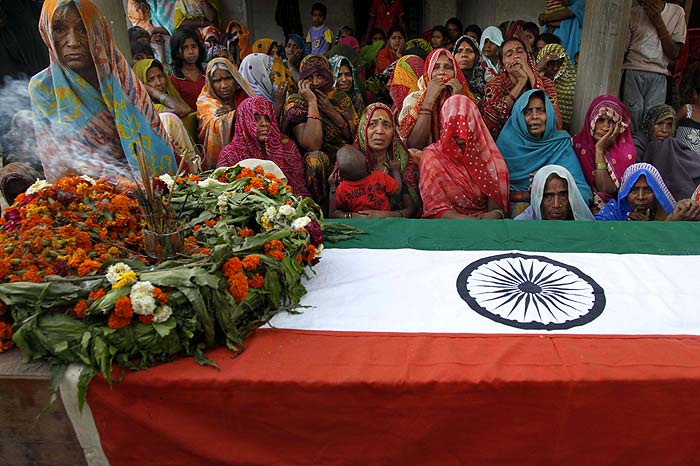 (There is) no point in… the Home Minister trying to be a Field Marshal. The response has to be in the shape of a small commander’s war. Who fought the war in Punjab? The sub-inspector, the inspector, the havaldar. I only provided the conditions for this.

…a skilled commander seeks victory from the situation and does not demand it of his subordinates.

Sun Tzu, The Art of War

No ‘solution’ has any relevance whatsoever without a clear detailing of the resource configuration and the objective context within which it is to be applied. Yet, virtually the entire counter-insurgency (CI) discourse in India has remained doctrinaire, with almost no reference to the nuts and bolts of what is available, a coherent strategy into which these capacities are woven, and how this is to be implemented.

Ajai Sahni, The Dreamscape of 'Solutions'

"Though the enemy is itching to suppress our Party and movement by deploying a huge force in all our areas, he has severe difficulties in implementing this at present… in the immediate context it is quite difficult for the Centre to send the forces required by each state to control our movement. Keeping this in mind, we have to further aggravate the situation and create more difficulties to the enemy forces by expanding our guerrilla war to new areas on the one hand and intensifying the mass resistance in the existing areas so as to disperse the enemy forces over a sufficiently wider area… tactical counter-offensives should be stepped up and also taken up in new areas so as to divert a section of the enemy forces from attacking our guerrilla bases and organs of political power."

And so, in a primitive demonstration of the primordial brutality of war – of cunning, deceit, possibly betrayal, but also of tactical superiority – the Indian State’s germinating illusion of a ‘strategy’ to ‘clear, hold and develop’ areas of Maoist dominance, has been swept aside. In the debris around the 75 dead bodies of the Central Reserve Police Force (CRPF) Company and one state policeman slaughtered by the Communist Party of India – Maoist (CPI-Maoist) at Chintalnad in Chhattisgarh’s Dantewada district on April 6, 2010, the remote imaginings of remotely controlled war games from hi-tech National Counter-terrorism Centres must seem, to those who can see, improbable and naïve, at best.

Union home minister P. Chidambaram confessed he was "shocked" by the Chintalnad incident. But this was hardly a bolt from the blue, and one must assume that it was the "brutality" and "cruelty" of the Maoists, which he also commented on, that had shocked him. This is also somewhat inexplicable, since Maoist brutality and cruelty are no novelty either. Nor should the Maoist reaction to Chidambaram’s much vaunted ‘coordinated campaign’ have held any surprises – the June 12, 2009, Politburo document made it amply clear that the Maoists were, perhaps, more aware of the state’s vulnerabilities than the state’s ‘strategists’ – if, indeed, they deserve the title.

At a purely psychological level, the only ‘shocking’ thing about Chintalnad was the number of fatalities, the highest, by far, for any single incident of Maoist violence. There is, however, too much of an obsession in the general and political discourse, with ‘watershed events’, such as the ‘largest fatalities’. Before this, Rani Bodli on March 15, 2007, with 55 fatalities, was the ‘worst’ Maoist attack, and the broad character of commentary was exactly the same as it is in the wake of the Chintalnad incident. Even then, we noted, "The cold and harsh reality is that such incidents will continue to take place with numbing regularity." Crucially, however, it is strategically insignificant whether 76 men are killed in a single incident, or cut down in the twos and threes, or the tens and twenties, in a protracted war of attrition. What matters is that these lives are being wasted, thrown away callously, unthinkingly, fruitlessly, without any rational calculus of enduring gain.

The Bastar Division, the worst affected region in the country, comprising five densely forested districts sprawling across 39,114 square kilometers in Chhattisgarh, and including Dantewada, the location of the current attack, has already accounted for five major Maoist attacks (each with three or more fatalities) in 2010. There were 26 such attacks in 2009; 21 in 2008; 29 in 2007; and 41 in 2006 (when Maoist violence against the disastrous state-backed Salwa Judum was peaking).

Bastar and Dantewada, the two worst afflicted districts in the division, cover 8,756 square kilometers and 9,046 square kilometers, respectively, (the Kashmir Valley spans 15,530 square kilometers by comparison). About 75 and 65 per cent of this area, respectively, is under forest cover. Yet, the state’s wisdom has seen fit to locate just six to seven battalions (2,400 to 2,800 men) of both the Central Para-Military Forces (CPMFs) and the Chhattisgarh Armed Force (CAF), to ‘fight’ the Maoists across this vast territory. With this sparse deployment, ill-conceived ‘area domination’ exercises are being forced on the hapless troops.

The centre has, over the past year, augmented CPMF presence in Chhattisgarh from 16 battalions (6,400 men) to all of 23 battalions (9,200 men). This ‘surge’, the Centre has led itself to believe, will give it the wherewithal to ‘clear, hold and build’ areas of present Maoist domination, with an immediate focus on the Rajnandgaon and Kanker districts of the Bastar division, even as meager State and CPMFs struggle to contain the Naxalite backlash, and, indeed, the Maoist strategy of diversion, in other areas.

‘Clear, hold and build’ is a staple of counter-insurgency (CI) doctrine. Why, then, is it the wrong ‘strategy’ when Chidambaram adopts it?

The answer lies in the meaning of ‘strategy’ itself. This has been said before, but it bears repetition: The word ‘strategy’ is thrown around cavalierly to describe every potpourri of intentions, aspirations, projections and initiatives. But certain minimal conditions have to be fulfilled before you can legitimately claim that you have a strategy. If there is a fundamental disconnect between objectives, tactics, resources and ground conditions, there is no strategy. Absent necessary capacities to secure objectives, a ‘strategy’ is reduced to the level of a slogan, a pipe dream, or, worse, a lethal delusion.

There are few peoples in the world as muddled in their habits of thought as the contemporary Indian, constantly seduced by borrowed, half-digested notions, too lazy and intellectually dishonest to do the homework that would be necessary to back up passionately advocated opinions. This absence of clarity, of due diligence, and of intellectual honesty stains every aspect of the currently proclaimed anti-Maoist ‘strategy’. Almost all aspects of the recent response to the Maoist challenge have been defined by extraneous considerations – an agenda set by an alternatingly hysterical or fawning mass media; political pretensions and postures; unsettling events and major attacks; puerile confrontations between individual policy-makers and Maoist leaders (can anyone forget the protracted and childish confrontation between Chidambaram and Koteshwar Rao aka Kishanji?); utterly misplaced priorities; indeed, anything but the realities, the dimensions and the dynamics of the Maoist challenge on the ground.

The most damaging phrase that is rattling around in the corridors of power today is, "Something must be done", or its twin, "the Indian state cannot be seen to be impotent". It is to these shibboleths that 76 lives were sacrificed at Chintalnad, as policy makers explicitly rejected a strategic approach, demanding instant action and a symbolism that could be held up to the public as concrete ‘achievement’ in an arbitrarily defined time frame.

Ignoring the fundamentals of capacity building, the centre in particular, has focused overwhelmingly on flashy meta-institutional reform, insisting that a National Counter-terrorism Centre, a National Intelligence Grid, a National Database, and Special Forces (such as the unfortunately named Combat Battalion against Resolute Action battalions) would act as ‘force multipliers’ in its campaigns against the Maoists and other extremist and terrorist formations. What was missed out, however, was the reality that the essence of ‘force multipliers’ is the existence and adequacy of ‘force’. With chronic and crippling deficiencies afflicting all central and state forces, it was no more than absurd to believe that changes at higher levels of organization would have any significant impact on operational capacities on the ground. And yet, so great is the sway of illusion in the corridors of power, such an idea was easily sold to decision-makers.

Chintalnad is certainly the highest fatality Maoist attack till date – but others will follow. Crucially, however, it is not the case that this attack represented the most destabilizing or tactically complex Maoist operation over the years. The Maoists have overrun district headquarters on more than one occasion; they have looted police armouries; broken open jails to rescue their comrades; overrun police and paramilitary camps and police stations; and, crucially, interdicted the operation of the state’s agencies of civil governance across vast regions of the country. They have consistently expanded their areas of activity and have been pushed back, in recent years, only in Andhra Pradesh.

Astonishingly, while the union ministry of home affairs sets about to reinvent the CI wheel, no one seems to have given even half a thought to what was achieved in Andhra Pradesh, and how. Indeed, and this has been emphasized endlessly in the past, India has exemplary CI attainments, and the campaigns of Punjab, Tripura and Andhra Pradesh – which lie along a single strategic continuum – contain all that could be needed to fight and neutralize the Maoists. Astonishingly, no one at the current centre of the security policy establishment appears to have even a rudimentary familiarity with these consummate models of response.

The avoidable tragedy at Chintalnad dramatically underlines the imperatives of a strategic shift in India’s CI responses. The ‘clear, hold and develop’ catchphrase, and the objectives of ‘territorial dominance’ (or recovery, as the MHA expresses) reflect fantasies, not strategies, within the framework of current national and state capacities. The centre and the states must now evolve a strategic response that can be reconciled with existing and evolving capacities.

An inquiry, headed by an outstanding police officer, E.N. Rammohan, has been instituted into the incident, and will shortly submit its report. By its very terms of reference, however, it will be bound to focus on local shortcomings and errors of judgment or leadership that culminated in the debacle. It is necessary to remember, however, that these local failings arise within an enveloping strategic failure. Unless it is accepted that strategic infirmities forced the tactical errors at Chintalnad, the future will bring more such incidents, and, inevitably, at some point, Chintalnad will no longer account for the ‘largest fatalities’ inflicted by the Maoists in a single attack.