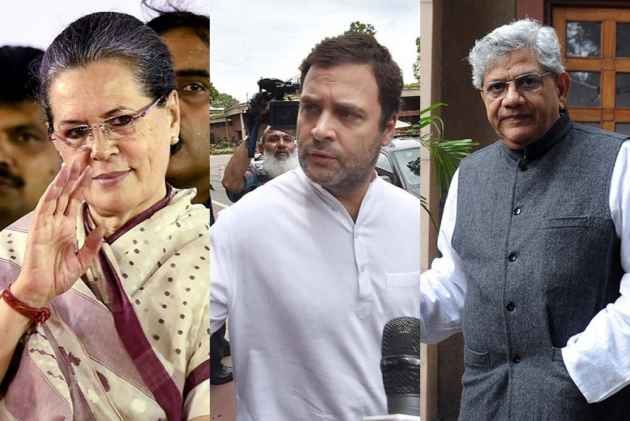 Mumbai-based advocate Dhrutiman Joshi filed the case in the Kurla magistrate’s court on Friday citing media reports referring to statements by the leaders, the report says.

The defamation case against them has come a week after eminent writer and historian Ramchandra Guha received a legal notice from Karnataka BJP Yuva Morcha accusing him of levelling direct allegations against BJP in connection with Lankesh’s murder.

In the defamation case against Sonia, Rahul and Yechury, the Mumbai lawyer Joshi said their statements had tarnished the RSS’s image and belittled the “organisation in the eyes of the common public”

He said he was prompted to file the complaint after being personally affected by their statements. “After the comments were made, my friends told me my organisation’s ideology killed Gauri Lankesh,” he said.

Condemning Lankesh’s murder, Congress President Sonia Gandhi  had said, “The killings of rationalists, free thinkers and journalists has created an atmosphere that dissent, ideological differences and divergence of views can endanger our lives.” She had also urged Karnataka Chief Minister Siddaramaiah to swiftly bring the culprits to book.

Rahul Gandhi, in a direct reference to BJP and RSS had said, “Anybody who speaks against the RSS/BJP is attacked & even killed. They want to impose only one ideology, which is against the nature of India.”

Anybody who speaks against the RSS/BJP is attacked &even killed. They want to impose only one ideology which is against the nature of India

CPI(M) general secretary Sitaram Yechury had said there is an “eerie pattern” in the murders of MM Kalburgi, Govind Pansare and Narendra Dabholkar. He said the Sangh Parivar is fostering a climate of bigotry, hate, intolerance and violence in India.

Union minister Gadkari had then said the attempt to link Lankesh’s murder with the BJP was baseless and false. “The government, the BJP or any of its organisations have no connection with the killing,” he had said. Karnataka BJP chief, Yeddyurappa had asked Rahul Gandhi to furnish evidence to back his allegations that RSS was behind the killing of Lankesh.

Lankesh, a fierce critic of the right wing politics in India, was shot dead by unknown men in Bengaluru on the night of September 5. She was shot in the head and chest by gunmen who arrived by motorcycle. The Karnataka government has formed a special investigation team (SIT) to probe the case.