The Delhi Assembly on Friday suspended BJP MLA Jitender Mahajan from its one-day special session and also marshalled out BJP legislators Anil Bajpai and Mohan Singh Bisht for allegedly disrupting the proceedings of the House. 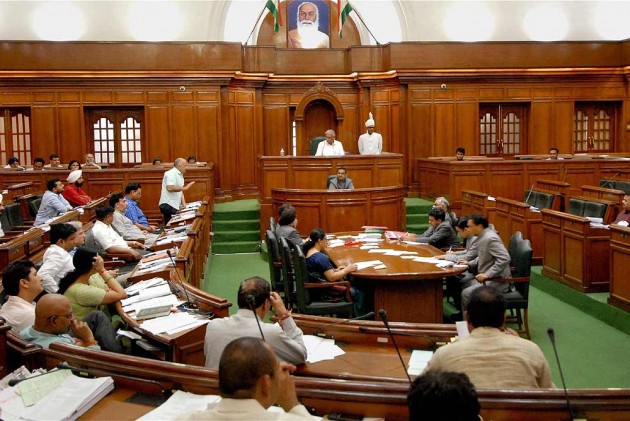 Other Bharatiya Janata Party (BJP) MLAs walked out of the House to boycott the proceedings in support of their suspended and marshalled out colleagues.

As soon as the proceedings of the special session began, the BJP MLAs demanded to be heard on various issues such as the new liquor policy, rising air pollution in the city, and high value-added tax on fuel among others.

Assembly Speaker Ram Niwas Goel denied any discussion on these issues saying the one-day session had been called for a special purpose and only items listed in the agenda will be discussed. "No other discussion will be allowed,” he said. Hearing this, BJP MLAs began shouting anti-government slogans.

Goel appealed to Mahajan, Bisht, and Bajpai to sit down and let the House function. He also warned the other BJP MLAs to calm down else be ready to be marshalled out for defying his directives. The BJP legislators did not relent.

The Speaker then asked the marshals to escort Bisht and Bajpai out of the House. At the same time, Transport Minister Kailash Gahlot moved a proposal to suspend Mahajan, the Rohtash Nagar MLA, from the entire session of the House, which was subsequently passed.

The Opposition BJP accused the ruling Aam Aadmi Party of running away from discussion on issues related to air pollution, liquor policy, and condition of local farmers in Delhi. Leader of Opposition in Delhi Assembly Ramvir Singh Bidhuri alleged that the Kejriwal government was scared to face issues related to the people of Delhi.

In its special session, the Delhi Assembly is likely to pass a resolution asking for repeal of the three farm laws, compensation to families of over 700 farmers who died during the protests, and legal guarantee of Minimum Support Price for crops.

It will also demand withdrawal of cases registered against farmers during the protests, and removal and arrest of Union Minister of State for Home Affairs Ajay Mishra in connection with the Lakhimpur Kheri incident during which eight people, including four farmers, died, sources said.

The Delhi Assembly mourned the farmers who died during the protests. The House also paid homage to the martyrs of 26/11 Mumbai attack. To mark the occasion of the Constitution Day, the Assembly members remembered leaders who drafted the country's Constitution and read the Preamble.