The second trial run was held in Anand Vihar on Wednesday. The device was first tested on Monday at the Delhi secretariat in the presence of Deputy Chief Minister Manish Sisodia and Environment Minister Imran Hussain 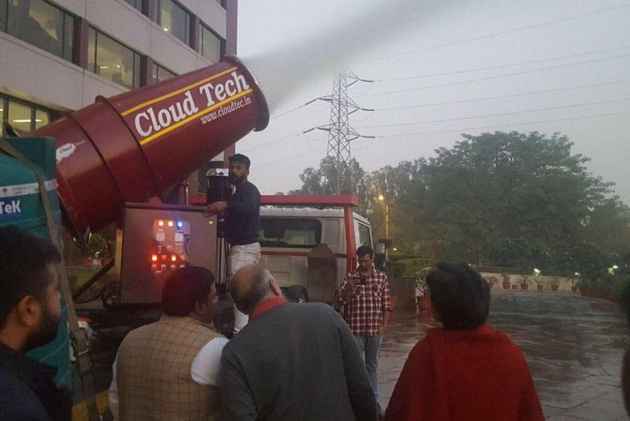 The Delhi government today tried out an anti-smog gun – a canon that sprays atomized water 50 metres into the air to bring down suspended pollutants-- in Anand Vihar, which is one of the most polluted areas of the city.

The vehicle-mounted canon sprays water, which are expected to bring down suspended pollutants in the air by clinging on to it just like how the rain does.

At around 8am on Wednesday, the Air Quality Index — a measure of pollutants in air — touched 332 in Delhi, which is considered very poor.

This device was first tested on Monday at the Delhi secretariat in the presence of Deputy Chief Minister Manish Sisodia and Environment Minister Imran Hussain.

Officials said more testing is required before a call can be taken on the use of the device, which costs around Rs. 20 lakh, reported NDTV.

A combination of smoke from stubble burning in Punjab and Haryana and moisture turned Delhi into a "gas chamber" in November, prompting authorities to announce a series of preventive measures including a four-fold hike in parking fees and slashing of metro fares.

The smog brought down visibility levels, affecting flight and train operations. The heavy air permeated living rooms and even the underground metro stations in the city making it difficult to breathe, turning eyes watery.

The air quality index was in the severe, with a score of 448 in a scale of 500, category for the second time this year. Earlier, Diwali fireworks had triggered peak pollution levels on October 20.

The National Green Tribunal took the governments of Delhi, Uttar Pradesh, Punjab and Haryana to task, seeking to know why steps to prevent steps were not taken despite knowing well in advance that such a situation was likely to arise.

The Indian Medical Association had called it a "public health emergency" and appealed to the government to stop outdoor sports and other such activities in schools to protect the health of children.