The Income Tax Department had contended that Rahul Gandhi's tax assessment for 2011-12 was reopened as material facts were concealed. 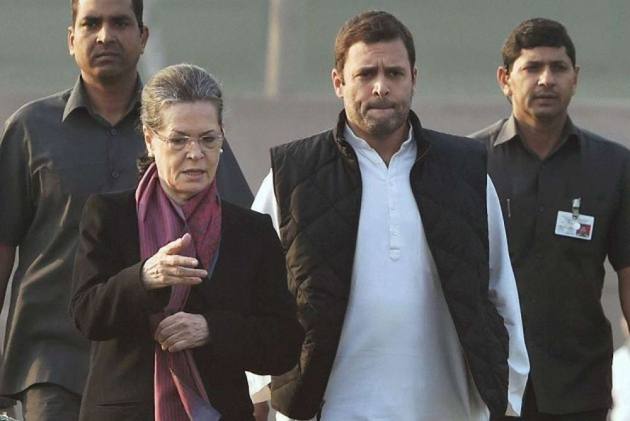 The Delhi High Court on Monday dismissed the pleas of Congress leaders Sonia Gandhi and Rahul Gandhi challenging reopening of their tax assessments for 2011-12.

A bench of Justices S Ravindra Bhat and A K Chawla said, "The writ petitions have failed."

The bench also dismissed the petition of Congress leader Oscar Fernandes who too had challenged reopening of his tax assessment for the same year (2011-12).

The high court had on August 16 reserved its order on the pleas of the three leaders after the Income Tax Department had contended that Rahul Gandhi's tax assessment for 2011-12 was reopened as material facts were concealed.

The bench had orally asked the tax department not to take any coercive step against Sonia, Rahul and Fernandes till pronouncement of its verdict.

Senior advocate P Chidambaram, appearing for Sonia Gandhi, had said he had faith in the oral statement made by the Additional Solicitor General Tushar Mehta.

Mehta had argued that the Congress leaders had alleged mala fide on the part of the tax department but had not made any averments in this regard.

The income tax cases against the Congress leaders have arisen from the probe into the private criminal complaint filed by BJP leader Subramanian Swamy before a trial court in connection with the National Herald case.

In the complaint, Sonia, Rahul and others have been accused of conspiring to cheat and misappropriate funds by paying just Rs 50 lakh, through which the Young India (YI) had obtained the right to recover Rs 90.25 crore that the Associated Journals Ltd (AJL) owed to the Congress party.

It was alleged that YI, which was incorporated in November 2010 with a capital of Rs 50 lakh, had acquired almost all shareholdings of the AJL, which was running the National Herald newspaper.

In this process, YI had also acquired AJL's debt of Rs 90 crore.

The tax department had said the shares Rahul has in YI would lead him to have an income of Rs 154 crore and not about Rs 68 lakh, as was assessed earlier.

The department's move followed its probe on a complaint alleging that the Gandhis had misappropriated AJL's assets while transferring their shares to the newly formed Young Indian.