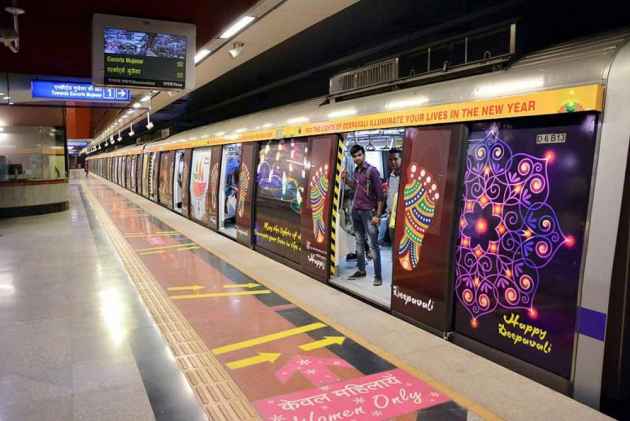 If you are travelling beyond 5 km on the Delhi Metro from today, be prepared to shell out Rs 10 extra with yet another fare hike coming into effect.

The hike, which comes five months within the last one, will affect every commuter of the mass rapid transit who travels beyond 5 km, while journeys falling in the 2-5 km distance slab will cost Rs 5 more.

Smart card users, who, according to DMRC's estimates, happen to be 70 per cent of the metro's total ridership, will continue to get 10 per cent discount on each ride.

They will get an additional discount of 10 per cent while travelling during off-peak hours, that is from beginning of services till 8 am, between 12 pm and 5 pm and from 9 pm to end of the services.

The announcement came late last night following a meeting of the metro's top decision making body, the DMRC board, which refused to "interfere" in the matter, referring to the stiff opposition mounted by Delhi Chief Minister Arvind Kejriwal against the hike.

The board, which met for around two hours, said it has no power to change the recommendations of the fare fixation committee (FCC), which had proposed the steep hike last year.

The board met around 8 pm at Nirman Bhawan following Kejriwal's insistence that the decision be withheld. The Delhi Assembly passed a resolution against the hike earlier in the day.

"Out of 16, Del Govt has 5 Directors, who opposed but Centre adamant. Hike too steep. Centre shud hv been more considerate for common man (sic)," Kejriwal tweeted.

The Delhi Chief Secretary, Principal Secretary (Finance) and Transport Commissioner are among the representatives of the Delhi government on the DMRC board.

The DMRC had been batting for a hike citing "losses" in view of loans and rise in input costs such as power tariff among others.

"The board was informed that under Section 37 of the Metro Railways (Operation and Maintenance) Act, 2002, recommendations of the FFC are binding on metro rail authorities.

"Subsequently, the board noted that it does not have the competence to consider and defer implementation of the recommendations of the FFC," sources said.

Earlier, Union Urban Development Minister Hardeep Singh Puri, in a letter to Kejriwal, said the meeting was called in the spirit of "cooperative federalism".

The new fares would be applicable across five corridors -- Blue, Yellow, Red, Green and Violet -- of the metro that crisscrosses the national capital, with the total network length currently standing at around 213 km.

There shall be no change in the fares of Airport Express Line (Orange Line).

When the Delhi Metro had started operations on December 25, 2002, the minimum fare was Rs 4 and maximum was Rs 8.