Jamia Teachers' Solidarity Association sees a pattern to encounter killings by the Special Cell of the Delhi Police. 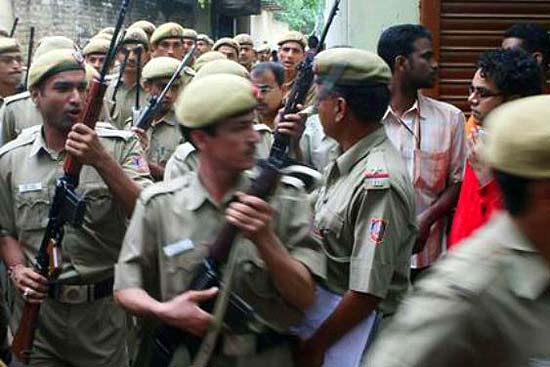 From the CP encounter in 1997 to the recent encounter of Manoj Vashisht, Jamia Teachers' Solidarity Association sees a pattern to these killings carried out by the Special Cell of the Delhi Police

The Manoj Vashisht encounter is not an exception. There is a pattern to encounter killings in the capital. An examination of any FIR in a case of encounter killing will reveal that a common template is employed in all these cases. It starts with the receipt of secret information about a gangster/ terrorist, followed by his interception, his attempt to escape by firing upon the police party and his death in retaliatory firing. Not only are these FIRs more or less identical, the 'heroes' of these encounters consistent over the last years collecting awards and promotions.

Connaught Place Encounter (1997): Two businessmen were gunned down by the Special Cell led by S.S. Rathi. Rathi and his group of 9 men were found to be guilty by the lower court. They appealed, were found guilty again by High Court. They appealed yet again. The Supreme Court upheld their conviction in 2011.

Ansal Plaza Encounter (2002): Two men in their 20s — allegedly Pakistani LeT operatives were gunned down in the basement parking of the Ansal Plaza market on the eve of Diwali. An eye witness, Dr Hari Krishna, contested the Delhi Police version that the two 'terrorists' had driven into the basement; instead, he said, he had seen the Delhi Police dragging two men who could barely walk and then shooting them. Dr. Hari Krishna battled years of intimidation.

Millennium Park Encounter (2003): On 30 August 2003, Rafiq, a resident of Uttar Pradesh, a tailor and petty vendor of chappals, was killed along with another man by the Special Cell for being an operative of JeM. Rafiq's mother told human rights team that visited her, that a special Cell team visited her house on 29 August and made her to speak to Rafiq on the cellphone. This indicated that Rafiq had been in police custody. Nothing came of the complaint filed to the NHRC by the mother. Rafiq's brothers were booked under POTA.

DhaulaKuan Encounter (2005): RavinderTyagi of Special Branch—now a leading light of the Special Cell—claimed to have apprehended four men, all Kashmiris and allegedly members of a terrorist group, after a fierce gun battle. In 2010, the sessions court ruled that the encounter had been “scripted” sitting in the police station. The court ordered filing of an FIR and a departmental enquiry against Tyagi and Co. The police of course filed an appeal.

Uttam Nagar Encounter (2005): The Special Cell congratulated itself for averting an attack on the Indian Military by arresting four Lashkar operatives in a daring encounter. All the arrested men were released by the court in 2010 after examination of the misrepresentation and fabrications by the Special cell. The court was clear that the men had been set up.

Sonia Vihar Encounter (2006): Heroes of the Special Cell and Crime Branch—led by SanjeevYadav, then Addl Deputy Commissioner of Police—battled a dreaded gang from UP in May 2006 near KahjuriKhas, Northeast Delhi. Years later it has been confirmed that they were picked up from their homes in Meerut and executed in cold blood. The Magisterial Enquiry ordered by the NHRC and conducted by the then Divisional Commissioner, Revenue Department (Govt. of NCT, Delhi) recommended a CBI enquiry. The fate of the recommendation remains unknown. In March 2014, the NHRC asked the Centre to pay compensation to the family of those killed in the encounter, calling it “doubtful”.

Batla House Encounter (2008): In a morning raid in Batla House, two young men were killed while an Inspector of the Special Cell sustained injuries, which turned out to be fatal. Despite gaping holes in the police story (viz., two 'terrorists' managed to flee the spot even with the police cordon; the gun shot entry wounds in the back and head of both the boys killed; the sloughing off the back and injuries on bodies not caused by gun fire), no judicial enquiry was ever allowed. The NHRC enquiry basing itself on the versions of senior police officers gave the Special Cell a clean chit.

Fauzi Encounter (2014): Firoz alias Fauzi, an alleged gangster,was killed by the Special Cell of Delhi Police supposedly on 19 August 2014 on Pushta Road, which falls under the Sonia Vihar Police Station. News reports about Fauzi's arrest had surfaced at least three days before the alleged encounter. Though NHRC took cognizance of JTSA's appeal to initiate an enquiry, it is not known whether the enquiry was concluded.

We must not allow the rhetoric of 'terrorism', 'gang wars', 'criminals' to overwhelm the due process of law. The right to self defence is not self evident. Those who kill, supposedly in the course of their duty, must prove that the force they used was necessary and proportional to the threat they faced.