The city government has significantly ramped up coronavirus testing capacity and more than 97,700 tests were conducted a day ago, the latest health bulletin showed. 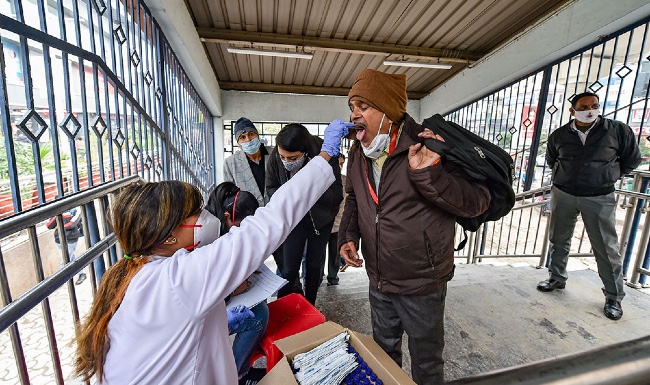 Delhi on Friday recorded 17,335 fresh Covid cases, the highest single-day rise since May 8, and nine deaths while the positivity rate mounted to 17.73 per cent, according to data shared by the city health department.

This rise is the highest since May 8 when Delhi logged 17,364 cases with a positivity rate of 23.34 per cent, while 332 deaths were also recorded on that day. The huge spike in fresh cases in the span of last several days here is being recorded amid a significant jump in cases of new Omicron variant of Covid in Delhi. The new fatalities raised the death toll from the pandemic to 25,136 in the national capital.

The number of cumulative cases on Thursday stood at 15,06,798. Over 14.41 lakh patients have recovered from the infection. During the height of the second wave of the pandemic, 28,395 cases, the highest-ever single-day tally here, and 277 deaths were recorded in Delhi on April 20 last year, according to official figures. Nine COVID-19 deaths were reported here in December last year, and seven in November, according to official data. Delhi had recorded four Covid deaths in October and five in September.

A total of 97,762 tests -- 78,154 RT-PCR tests and 19,608 rapid antigen tests -- were conducted a day ago, the bulletin said. Meanwhile, Delhi Health Minister Satyendar Jain on Friday said the city has reported six times lower hospital admissions due to coronavirus this time as compared to the first wave of infections. He also said construction workers should not worry as construction work will go on.

Also, Sir Ganga Ram Hospital on Friday said 15 of their healthcare workers, including five doctors, have tested Covid positive, amid growing Omicron threat. The single-day rise in coronavirus infections was recorded above one lakh after 214 days, taking India's total tally of COVID-19 cases to 3,52,26,386 which includes 3,007 cases of Omicron reported across 27 states and UTs, according to the Union Health Ministry data updated on Friday.

Maharashtra recorded the maximum number of 876 Omicron cases followed by Delhi at 465, Karnataka 333, Rajasthan 291, Kerala 284 and Gujarat 204. Meanwhile, health experts have cautioned that as far as the surge in coronavirus cases in Delhi is concerned, "it's a wildfire right now".

"This is expected to last at least over two months, and the patients' footfall in our hospital has increased phenomenally in the last few days. Since the number of cases has seen a massive jump, more number of deaths is also being reported," said Dr. Suranjit Chatterjee, a senior consultant at Apollo Hospitals here.

According to the Friday's bulletin, of the 13,312 dedicated Covid beds in Delhi, 1,390 were occupied, including by suspected cases, while 11,922 beds were lying vacant. Active cases in Delhi on Friday rose significantly to 39,873 from 31,497 on Thursday. Also, a total of 286 coronavirus patients were on oxygen support while 31 severe patients were on ventilator, as on Friday.

The number of people under home isolation stood at 20,695 on Friday while it was 14,937 a day before, and the number of containment zones in the city stood at 6,912, a sharp rise from Thursday's 5,168, the bulletin said.