The Delhi Police seems to be mocking us all, rebuking us in fact, reminding us that words and phrases like rule of law, justice, victims, fairness shall be defined only in the manner that the government pleases, writes Manisha Sethi. 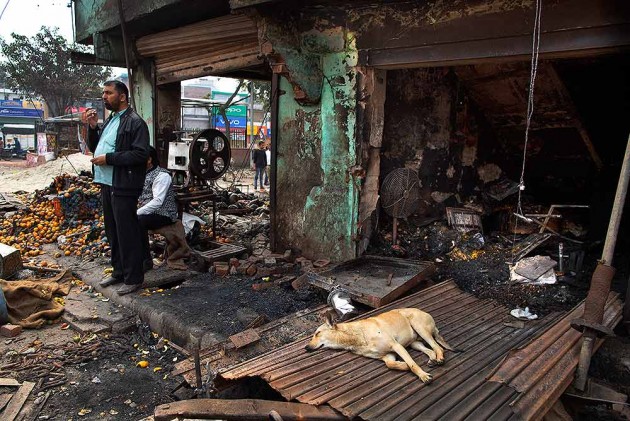 The Delhi Police is insistent that investigation into the Jamia Millia and Northeast Delhi violence is proceeding ‘fairly’ and ‘impartially’, guided by ‘forensic and scientific evidence’. Even in a world where words have seemingly lost all meaning, this statement still manages to sting you with its insincerity. The Delhi Police seems to be mocking us all, rebuking us in fact, reminding us that words and phrases like rule of law, justice, victims, fairness shall be defined only in the manner that the government pleases.

For, immediately after offering us these platitudes, the Delhi Police invoked Sections 13, 16, 17 and 18 of the Unlawful Activities (Prevention) Act against arrested student leaders and activists involved in the anti-CAA protests. Make no mistake, the state has thus deployed the mightiest weapons in its arsenal against dissent. Sections 16 to 18 of the UAPA refer variously to ‘punishment for terrorist act’, ‘raising funds for terrorist act’, and ‘conspiracy etc’ related to a terrorist act. And Section 13 pertains to punishment for ‘unlawful activity’—a term that denotes something simultaneously vague and all-encompassing, just like ‘terrorist act’.

‘Unlawful activity’, for example, includes bringing about or supporting secession, disclaiming, questioning or intending to disrupt the sovereignty and territorial integrity of India, or causing or intending to cause disaffection. It is thus on the slippery terrain of ‘intention’, ‘support’, ‘questioning’, ‘disclaiming’. And because violence is not even the key ingredient of unlawful act – which embraces everything from act or words, either spoken or written, even “signs or visible representation or otherwise”, the law allows the government to consign political and social struggles that challenge the mainstream national narrative, to the overflowing category of unlawful.

Sections 16-18 were seeped into UAPA from POTA when the latter was repealed in 2004 following mounting evidence of the way in which that law was used to target political dissidents and marginalised sections, including tribals and Muslims. It is this terrible legacy that has been absorbed into UAPA. The same imprecision that attached to POTA’s definition of terror afflicts UAPA too. It is defined primarily through its intent (“intent to strike terror”) other things being same. It duplicates a range of criminal law offences, such as causing death, injuries, damage to public property, disrupting essential services, use of firearms, explosives etc – all of which are otherwise also covered under a range of laws. This provides latitude to the executive—both police and government—to subjectively choose what to designate as terror, and what to dismiss indulgently as ordinary violence. It is in their power then to decide when to invoke the draconian provisions of UAPA, and when to apply (and in some cases never to apply) ordinary criminal law.

And this is precisely the seduction of laws like TADA, POTA, and now the UAPA.

What the UAPA hollows out is the constitutional guarantees of fair trial and right to life and liberty. It thus perverts the very notion of rule of law beyond recognition. Check Section 43D(5) of the UAPA, which deals with bail provisions. A replica of S. 49 (7) of POTA, it makes it practically impossible for an accused to secure bail. Under this section, bail cannot be granted till the public prosecutor has been heard, and it can be declined if the magistrate concludes, upon reading the chargesheet, that the charges are true. So, in effect, an accused has to demonstrate her innocence, that too at the start of the trial, in order to be even granted bail. UAPA thus explicitly—and legally—denies the presumption of innocence. Which of course is the very bedrock of modern law.

Secondly, through its sheer arbitrariness, it allows the marking out of ‘enemies of the state’, who can then be quarantined and neutered. These are both political ideas and groups (‘Urban Naxals’, for example, most recently), and categories of people defined by religious or ethnic markers.

The figure of the anti-CAA protester condenses both a dissident politics and a suspect religious category. A Muslim out on the streets speaking politics and rejecting the communalisation of citizenship—from Sharjeel Imam to Safoora Zargar—is then a threatening, dangerous ‘Other’ par excellence.

Read, for example, what the notorious FIR in the Delhi violence case says: it speaks of a ‘premeditated conspiracy’ of rather apocalyptic proportions. It involves—as alleged links in the chain leading up to rioting—young student leaders who gave speeches against the CAA-NRC, protesting women and children who blocked roads under the Jaffrabad metro station, and all ordinary Muslims who did not send their children to school knowing that violence would break out!

Imagine that sweep. It is not even simply those who have been arrested who are criminalised here…(and that’s a widening lasso that has already netted Jamia alumni association president Shifa-Ur-Rehman). The real effect goes way beyond that. In one stroke, the conspiracy is shown to be one in which the entire Muslim community was complicit, women and children included. ‘Instigator’, ‘conspirator’, ‘rioter’: every Muslim is guilty.

This is no ordinary FIR. Its narrative burden is more than simply to criminalise a democratic movement—a movement that was as peaceful and inspiring in its form as radical in its content, a movement that simply sought adherence to the Constitution. It is to pathologise an entire community. And by extension, to wipe out the fact that the victims of the February violence—now designated as a terror act through the application of UAPA—were overwhelmingly Muslims.

Would terror charges have been invoked if a different set of accused had been booked for the Northeast Delhi violence—say, those whose speeches openly threatened violence against anti-CAA protesters? That such a prejudiced document is the basis of the present investigation and prosecution should give us all, and the judiciary, ample cause for alarm.

(Manisha Sethi is the author of Kafkaland: Law, Prejudice and Counter-terrorism in India. She teaches Sociology at NALSAR university, Hyderabad. Views expressed are personal.)