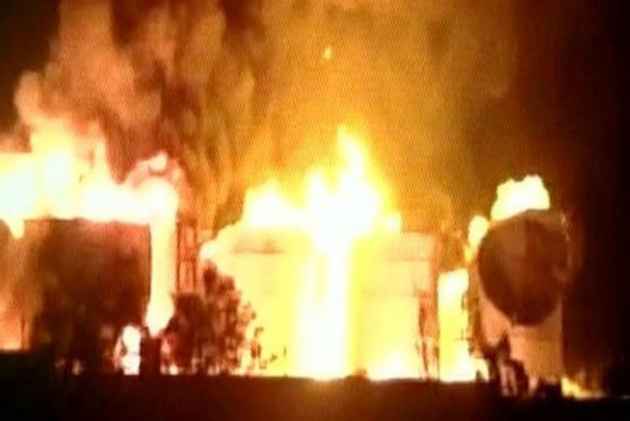 At least 17 people were killed after a fire broke out at a firecracker factory in outer Delhi’s Bawana industrial area on Saturday evening.

According to Rohini Deputy Commissioner of Police Rajneesh Gupta, a case has been registered and a co-owner of the unit, Manoj Jain, was arrested.

"The owner of the firecracker factory has been arrested," officials told ANI.

"Manoj Jain has been apprehended. As per the information, the two partners were there. Manoj Jain and Lalit Goel. It is to be verified whether they are the owners or have taken the premises on rent," he said.

The industrial area recorded three fires on Saturday - the first around 4 pm in a carpet manufacturing company in Sector 1, the second in the firecracker unit in Sector 5, and the third in Sector 3 at 7.30pm.

"We had received three calls. One was from 3:55 at Sector 1 from a carpet manufacturing company, the second was at 6:20 from bomb storage factory and third was at 7:35 from Sector 3," said GC Mishra director, fire department.

Delhi Chief Minister Arvind Kejriwal ordered an inquiry into the fire while announcing an ex-gratia of Rs.5 lakhs to the family of the deceased and Rs. 1 lakh to injured.

Delhi industries minister Satyendar Jain also took congnisance of the tragedy and tweeted, "Learnt about a serious fire incident in a private factory at Bawana. Several casualties. Monitoring the situation. Have ordered an enquiry."

Prime Minister Narendra Modi also expressed grief over it and said, "My thoughts are with the families of those who lost their lives. May those who are injured recover quickly."