Those In Power Should Listen To People And Fulfill Ram Temple Demand, Says Bhaiyyaji Joshi At VHP Rally

Without naming the BJP, Joshi added, "We are not begging for it. We are expressing our emotions. The country wants Ram Rajya." 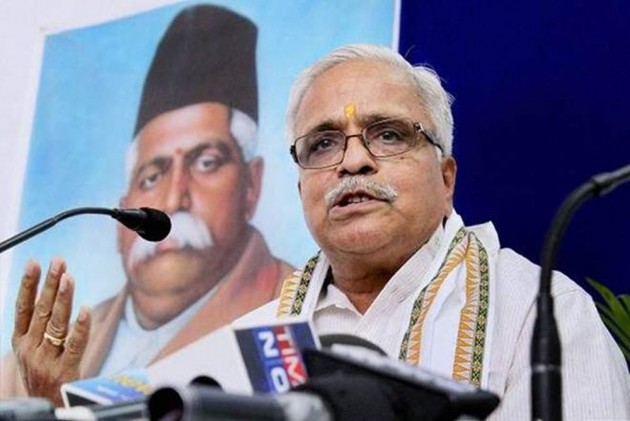 Senior RSS leader Suresh 'Bhaiyyaji' Joshi on Sunday made a veiled attack on the BJP for not fulfilling its promise of constructing Ram Temple in Ayodhya and demanded the Union government to enact a legislation, if need be, for it.

Speaking at a VHP rally at Ramlila Maidan in Delhi, the RSS executive head said, "Those in power today had promised to construct Ram Temple. They should listen to people and fulfil the demand of temple in Ayodhya. They are aware of the sentiments."

Without naming the BJP, Joshi added, "We are not begging for it. We are expressing our emotions. The country wants Ram Rajya."

Thousands of people have gathered at Ramlila Maidan for the Vishwa Hindu Parishad rally, which comes ahead of Parliament's winter session commencing on Tuesday.

The title suit of the Ayodhya land dispute case is pending before the Supreme Court. In January, the court is expected to announce a date for the beginning of the hearing.

But as the dispute has remained unresolved for more than 25 years, right-wing groups are demanding that the Union government sidestep the courts and go ahead with the temple building.

The VHP has been saying that it was confident that the bill will be tabled in the upcoming winter session of Parliament for paving the way for construction of a Ram temple in Ayodhya.

The traffic police has issued an advisory detailing diversions in view of the rally. It said no traffic will be allowed on Ranjeet Singh Flyover (from Guru Nanak Chowk to Barakhambha Road), JLN Marg (from Rajghat to Delhi Gate), Chaman Lal Marg near VIP gate.

Elaborate security arrangements have been made at Ramlila Maidan and snipers have been deployed on high-rises.

The VHP had carried out a door-to-door campaign to make the rally a success.

"It is a massive gathering which will change the hearts of all those who are not in favour of bringing the bill for construction of a grand Ram Temple in Ayodhya," VHP's spokesperson Vinod Bansal said.

The right-wing group had approached President Ram Nath Kovind and state governors during previous phases of its temple campaign. In the forthcoming stage, it will hold religious rituals and prayers at temples and matths.

The campaign will culminate at Prayag with a 'Dharam Sansad' of priests and saints. The final religious congregation will be held on January 31 and February 1.