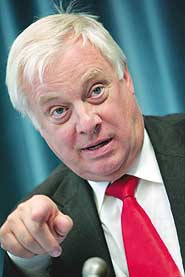 What do you think India’s chances are of emerging as a major power?
I’ve written about the curious phenomenon of American and European bankers, businessmen, investors flying over India—which is a democracy with the rule of law—to invest in China. However wonderful things may be in China, it still doesn’t have the institutions of a free society.

Kamal Nath said, "China may win the sprint, but India will win the marathon." Is there something to it?
The statement contains a profound truth. India does not need to reconcile its governing structures with what is happening to its economy, the growth of its middle class, or the myriad social changes happening as a result of reforms. China will have to deal with glaring contradictions between its economy and political system.

So why is it that China has done so much better in attracting FDI?
India’s problem is not so much democracy as the fact a lot of people still cling on to the old socialist baggage, long after anyone else in the world. The Chinese communist party doesn’t have these hang-ups, which accounts for the progress in attracting foreign capital.

How will Indo-British roundtable promote investment in India?
Frankly, I think there is room for investment in both directions. As we have seen with many of the British multinational companies who have been holding their board meetings in India, there is a lot more interest, but it’s important to focus that and to make sure that the interest turns into action, investment, jobs, profits, and further investment on the ground.

Is this an interest in investment or in India as a market?
It’s an interest in both. Whatever the product you are selling, you need to have a foothold in India. After all, it will be the biggest country in the world (forget being the second biggest) by the middle of this century. The other great advantage India has is that it will have a workforce younger than that of China. So it makes sense to see India as a good place not only to invest in, but also as a place for selling everything from confectionary to high-tech engineering equipment.