The government has stoutly defended the suspension of the 12 opposition members and demanded that all those guilty of disrupting the House in the Monsoon Session should not only apologise to the Chair for questioning him, but also to the House and the nation. 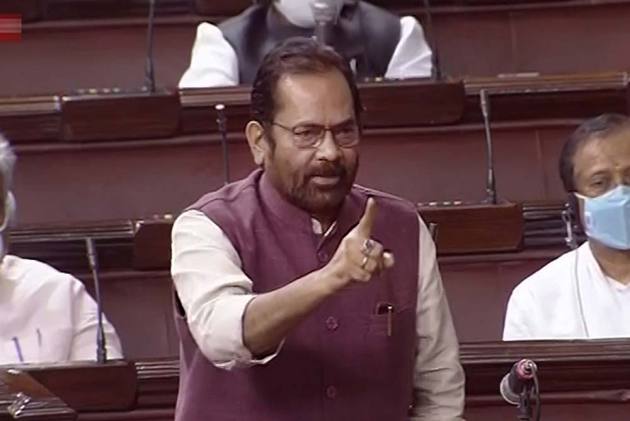 On Tuesday,  Deputy Leader of the Upper House Mukhtar Abbas Naqvi hit out at the Opposition over the suspension of 12 Rajya Sabha MPs, saying they should come out of their "hangover of feudal arrogance" and accept their "mistake" instead of justifying their actions.

The 12 MPs were suspended from Rajya Sabha on Monday for the entire Winter Session of Parliament for their "unruly" conduct in the previous session in August, prompting protests by the Opposition which called it "undemocratic and a violation of all the Rules of Procedure" of the Upper House.

The government has stoutly defended the suspension of the 12 opposition members and demanded that all those guilty of disrupting the House in the Monsoon Session should not only apologise to the Chair for questioning him, but also to the House and the nation. The Opposition MPs have categorically rejected the demand, saying they would not apologise as they were raising people's issues.

Talking about the suspension issue, Naqvi said the government is always in favour of the participation of all members in debate and discussion but "unfortunately priorities of some members seems to be to disrupt and destroy the decorum of the House".

"Those who have harmed the dignity of the temple of democracy should accept their mistake rather than justifying their acts," the Minority Affairs Minister said. "Unfortunately, instead of accepting their mistake, they are not only justifying their actions but also saying they will continue to do so. This kind of behaviour weakens the democratic system," the BJP leader told PTI.

The Opposition should come out of the "hangover of feudal arrogance" and perform their constitutional duties, maintaining parliamentary decorum, he added. One does not become small by accepting one's mistake. Instead, one's stature grows on accepting a "mistake", Naqvi said.

Rajya Sabha Chairman M Venkaiah Naidu has said he was not considering Leader of Opposition in Rajya Sabha Mallikarjun Kharge's appeal of revoking the action as the suspended MPs have not shown any remorse, but on the contrary, justified their acts.