International oil prices touching a four-year high of USD 85 per barrel is a "challenge" that has resulted in fuel prices continuing to rise despite a one-off excise duty cut and public sector units (PSUs) subsidising fuel. 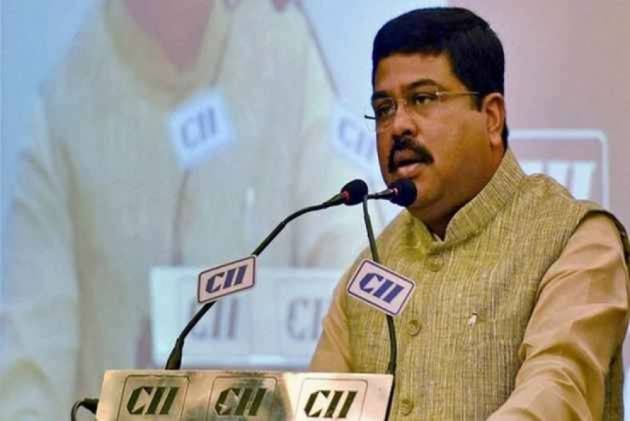 Oil Minister Dharmendra Pradhan on Monday said that going back to deregulation of fuel pricing is impossible despite the government asking state-owned firms to subsidise petrol and diesel by Re 1 per litre.

Speaking at The Energy Forum in New Delhi, he said international oil prices touching a four-year high of USD 85 per barrel is a "challenge" that has resulted in fuel prices continuing to rise despite a one-off excise duty cut and public sector units (PSUs) subsidising fuel.

Pradhan said he had spoken to Saudi Oil Minister Khalid A Al-Falih and "reminded him of the June commitment of Opec to increase production by 1 million barrels per day" to help cool prices.

"Maybe Opec is not following the June decision," he said.

The combination of high international oil prices and a depreciating rupee has made imports costlier, resulting in retail pump rates shooting up. Petrol price on Monday was hiked by 21 paise a litre and diesel by 28 paise.

Pradhan said the decision to cut excise duty on petrol and diesel by Rs 1.50 per litre each and ask oil PSUs to absorb another Re 1-a-litre was aimed at "giving relief to consumers".

Later talking to reporters, he said the government was sensitive to consumers and had taken the decision in their interest.

On asking oil PSUs to subsidise fuel, he said the companies have taken the decision to "shield" consumers from high prices.

"This is not going back on deregulation. Fuel prices continue to be decided on a daily basis based on factors like benchmark international rate and foreign exchange rate," he said.

Indian Oil Corp (IOC) Chairman Sanjiv Singh said the oil companies continue to have the freedom to change rates on a daily basis and the Re 1 per litre subsidy was a temporary move.

The decision would dent the profitability of oil companies by about Rs 4,000 crore to Rs 4,500 crore in the current fiscal, he said.

Pradhan said the centre had done its bit and now states should come forward and cut sales tax or VAT.

"Many states have done but some who were shedding only crocodile tears over high fuel prices havent," he said without naming any state.

He said he does not want to politicise the issue but states must realise their responsibility and cut value added tax (VAT).

In three days after the excise duty cut and PSU subsidy came into effect on October 5, petrol prices have gone up by 53 paise a litre and diesel by 86 paise.

Delhi, which did not cut VAT on fuel, still has the cheapest fuel in all metros and bulk of state capital as it levies lower taxes. Mumbai despite reducing VAT on petrol still has the highest priced fuel.

After the centre cut excise duty by Rs 1.50 per litre and asked PSU oil firms to subsidise fuel by Re 1, Maharashtra and Gujarat governments were among the first to announce a matching Rs 2.50 cut.

They were later joined by Chhattisgarh, Jharkhand, Tripura, Uttar Pradesh, Madhya Pradesh, Himachal Pradesh, Haryana Assam, Uttarakhand, Goa, Arunachal Pradesh and Bihar with similar moves. Jammu and Kashmir, which is under governor's rule, too reduced tax on the two fuel.

Maharashtra, however, reduced VAT only on petrol and not on diesel.

Even before the excise duty cut, Rajasthan, West Bengal, Karnataka, Kerala and Andhra Pradesh had last month reduced VAT to cushion consumers for a spate of price increases.

The reduction in excise duty, only the second in four years of BJP-led NDA rule, will dent central government revenues by Rs 10,500 crore and was aimed at cooling retail prices that had shot up to an all-time high.

The BJP-government at the centre had raised excise duty on petrol by Rs 11.77 a litre and that on diesel by Rs 13.47 a litre in nine installments between November 2014 and January 2016 to shore up finances as global oil prices fell, but then cut the tax just once in October last year by Rs 2 a litre.

Prior to Friday's cut, petrol price had risen by Rs 6.86 a litre and diesel by Rs 6.73 since mid-August - the most in any six-week duration after the daily price revision was introduced in mid-June last year.