Narendra Modi's prime-ministerial candidature hurts Nitish Kumar the most: whether he breaks the alliance with the BJP over it or remains an NDA partner 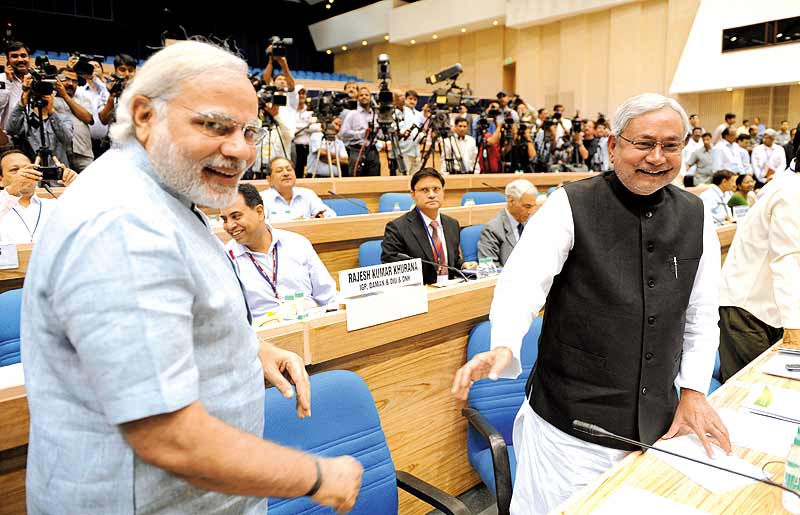 The acrimonious spat between the JD(U) and the BJP over Narendra Modi’s candidature for prime-ministership is just a symptom of a far deeper political crisis that the JD(U) is facing. Being a seasoned politician, Nitish Kumar is well aware of the fact that amongst all the major political parties in Bihar, the JD(U) stands to lose the most in either case, that is, if it breaks the alliance with the BJP over the Narendra Modi issue or continues to remain an NDA partner with Modi as a PM candidate. Nitish knows very well that the only way he can retain the 20 seats his JD(U) got in Bihar in the last Lok Sabha election is by ensuring that the JD(U)-BJP alliance remains intact and someone like Lal Krishna Advani or Sushma Sawarj is declared the NDA’s PM candidate. His anti-Modi posturing and the December deadline that he has given the BJP to declare the PM candidate is a desperate tactical move to galvanise the other NDA partners to veto Modi’s candidature. Nitish is also trying to force the BJP to take a step back and realize that with Modi at its helm, it will lose an alliance partner in the JD(U), which could otherwise be the second biggest contributor to the NDA kitty in terms of seats when the next Lok Sabha results are declared.

As in the rest of India, the outcome of the Lok Sabha elections in Bihar in 2014 and the subsequent Assembly polls in 2015 will be a combination and interplay of caste-communal-class arithmetic and the prevailing political perception at the time. And the kind of matrix that is emerging after the Modi crisis certainly does not look good for Nitish’s JD(U).

Let’s first do a quick survey of the numbers and vote share of the last assembly elections held in Bihar in 2010 that indicate the dilemma for the JD(U) in the next Lok Sabha elections. The JD(U) polled 22.60% votes, the BJP 16.5%, RJD 18.4 %, Ram Vilas Paswans LJP 6.7 % and the Congress 8.3%. The BJP-JD(U) combine together polled 39 % votes and won 206 seats out of 243. Almost all caste groups voted for the alliance, but it was the BJP that mobilized the upper castes like the powerful Bhumihars, the Rajputs and the Brahmins. Nitish was able to create a powerful alliance of the middle castes and the extremely backward castes. What made the alliance extremely potent was that Muslims, who constitute 16 % of voters in Bihar, voted for Nitish in large numbers. Lalu Yadav's RJD and Paswan’s LJP alliance were left with mostly Yadav and Paswan's Dalit votes, with Muslims voting for them only in some pockets.

Given these numbers, let’s first look at what will happen if Nitish breaks ties with the BJP over Modi and decides to contest alone. The upper castes are bound to desert him and vote for Modi’s BJP, which effectively means that the JD(U) vote share of 22.6 % will drop significantly. And as politics in Bihar stands today, Lalu and Paswan are most likely to continue their alliance. Learning from its mistakes in going it alone in the 2010 assembly elections, the Congress may also join them and make their alliance more powerful with its additional 8 % vote. This means they will be comfortably ahead of Nitish, with a vote share of over 30 %. On the other hand, if Nitish decides to remain in the NDA, with Modi as the PM candidate, the Muslims are certain to desert Nitish and go with the Lalu-Paswan alliance, yet again bringing down JD(U) votes and seats significantly and putting the JD(U) on the margins in national politics after the next general elections. But more importantly, these results will carry forward their impact in the assembly elections that will follow soon in 2015.

Bihar is a deeply caste-ridden polity, and now with the added debate of communalism versus secularism triggered by Modi’s arrival on the national stage, arithmetic and percentages are numbers that reflect prevailing political perceptions.

Analysing the three year rule of Nitish’s government, the perception gaining ground amongst Muslims is that Nitish’s government has become hostage to the rabid Hindutva politics of the Sangh Parivar. These perceptions are not just prevalent amongst Muslims but among Dalits and the backwards castes as well, who feel that there is a resurgence of landed, upper caste dominance. These beliefs, based on significant political events, both at the level of practice and policy, are deeply ideological in nature.

The brutal killing of six Muslims, which included an eight-month-old infant and a pregnant woman, by the Bihar police in Forbesgnaj town of Araria district in June 2011 is seen as an incident where there was a direct nexus between the local BJP and RSS cadre and the police. Shocking video images of a policeman jumping over a hapless man lying injured amidst the flames added insult to injury. Muslims were protesting against a land acquisition drive by the government to hand over land to a private industrialist who had close links to a BJP leader. But more significantly, just two weeks ago, the local police issued arrest warrants against 50 people, which included the six dead, making a mockery of not only the investigation process but sending a clear signal that there is a growing influence of the BJP/RSS in the administration.

Exactly one year later, in June 2012, Brahmeshwar Singh `Mukhiya’, the dreaded chief of the banned upper caste paramilitary Ranvir Sena, was gunned down in broad daylight in Ara, allegedly by the Maoists. What followed during his funeral procession on the streets of Patna was a display of violence and aggression by upper caste groups who were publicly egged on and supported by leading upper caste politicians mostly belonging to the BJP.

Nitish and his government, which has trumpeted its achievements in improving the law and order situation of Bihar has, however, been seen as helpless every time the Sangh Parivar has decided to flex its muscles and take the law and order into its own hands, as is evident in the Forbesganj killings and the `Mukhiya’ funeral.

To add to these incidents, the subversion of two important commissions that would have had far reaching political consequences is again seen as Nitish’s appeasement of the Sangh Parivar. The implementation of the recommendations of both these commissions would have badly hurt the BJP and its core upper caste constituency. Nitish’s decision to abruptly disband the Amir Das Commission report that was set up by Lalu after the Laxmanpur Bathe massacre to investigate the link between politicians and the Ranvir Sena is clearly seen as an act to suppress findings which, most likely, would have indicated a link between the BJP/RSS leadership and the Ranvir Sena.

Similarly, Nitish's government has been completely silent on the Bihar Land Reform Commission. The commission had recommended providing land to share-croppers with secure cultivation rights as well as making available surplus land for distribution to the landless by implementing ceilings on land holdings. Nitish's inaction on these commissions has, once again, given strength to the perception that because of his dependence on the BJP, he will never do anything that hurts the interests of the landed upper castes.

Nitish realizes that the honeymoon with the BJP is over. The BJP has found roots in Bihar’s state machinery and polity. Unlike the JD(U), BJP is a deeply ideological party with a committed cadre. JD(U), like Lalu’s RJD, is a one-man party. Nitish realises that if he gets discredited amongst the Muslims and Dalits, JD(U) will suffer a fate similar to RJD. He also understands that the JD(U) will lose a large number of seats if there is a small swing of votes in favour of Lalu and Paswan. Which is how we should see Nitish’s diatribe against Modi: desperate posturing in the hope that the BJP will find a compromise candidate to keep intact the JD(U)-BJP alliance. Nitish knows that his immediate survival in Bihar and national politics is directly linked to the health of the alliance.

Jamal Kidwai is the director of AMAN Trust