Despite Big Talks About Development, Meghalaya's Election Will Be Fought On Beef And Religion

The party which has sworn to ban cow slaughter in the country, in Meghalay, is confronted by a beef-eating electorate. 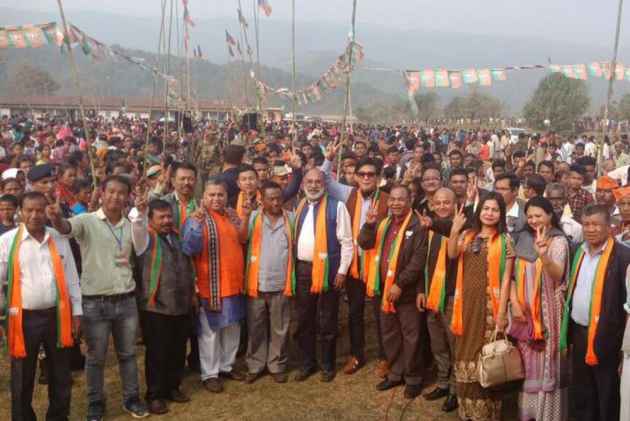 Despite all the big talk about development and progress in the various party election manifestos, Meghalaya’s elections is going to be fought largely on the issue of beef and religion.  These topics are inescapable in this beef-loving Christian dominated state. They have a habit of creeping into almost every speech or talk during high profile campaigns, press conferences or one to one talks and equally among the population of young and old, in the market places or at gossipy sessions.

Take the speech by the Prime Minister Narendra Modi on February 15 in Phulbari constituency, bordering Assam.  Trying to sell the secular credentials of the Bharatiya Janta Party (BJP) to a predominantly Muslim electorate he went out of his way to talk about his government being instrumental in getting freed several nurses held hostage in Iran, pointedly underlining the fact that they were all Christians.

It only exposed the fault lines that his party denies exists.

For over the last one year running up to the elections, India’s ruling party BJP has been like the proverbial maiden who ‘doth protesteth too much’  here in Meghalaya and the rest of the North East region as the party, which has sworn to ban cow slaughter in the country, is confronted by a beef-eating electorate.  Explaining that this ban is being done on health grounds belies the point as most in these parts choose to believe that it is a sly cover for furthering its religious agenda  to protect the gau mata  culture. The videos of killings of beef eaters or thrashing and lynching of cow-traders in various parts of the country has passed through almost every voter’s mobile phone , a worry for the BJP which is doing its best to prove that the BJP is not involved in all that but is a protector of minorities. As for persecution of Christians, there are dozens of viral videos, appeals and prayers which show the ruling dispensation in poor light, whether these happen to be true or fake.

The Union minister of Tourism, K J Alphonse, a Christian, fronted here to lead the charge for Meghalaya, has his hands full beating off these allegations. It did not help either that he had made an offer of around Rs.70 crore for development of religious institutions earlier during his visits, but when the major church organizations of the State publicly refused the offer, it has  raged on to become an election issue and an embarrassment for the him and the BJP which refuses to die down.

Mr Alphonse’s problems as the campaign manager become even more difficult when his own government at the Centre created more problems at this crucial time by denying a visa to an international leader of the Baptist church who was slated to address the faithful at a historic celebration of the 150 years of Christianity in the Garo Hills. The Garo Baptist Church is one of the most influential organizations in the entire Garo Hills. This particular incident by itself is enough to turn off a wide section of voters, say locals.
The rival parties, particularly the Congress could not have gotten a better beating stick as it happily wields it on the BJP where it hurts most dragging the party through the tomes of anti-Christian allegations.

As for the politics over beef, the BJP has only itself to blame for raking up a massive controversy over the issue. Again in the Garo hills, in June last year, they lost the whole BJP wing in North Garo Hills when its president unit , Bachu C Marak was removed for proposing to hold a beef party to celebrate PM Modi’s third year in power. Marak’s telling remark as he made his way of out was , “ I made this proposal only to clear the doubts in mind of local people that the BJP is trying to impose ban on consumption of beef.” West Garo

Hills president, Bernard N Marak   was also shown the door when he sought support for the party on the plan that the BJP would bring down the price of beef if it was voted to power. “Because the BJP could not accept Garo culture, tradition and food habits, like nakham bitchi, beef is  a part of traditional food.  We cannot compromise on beef,” was their last word as they quit closing down the unit offices with their supporters in tow.

The beef issue made the state BJP vice president, David Kharsati, once rail against the Congress for spreading ‘false propaganda” about beef  in a meeting in the  Jaintia Hills. But he made a promise which caught at the throat of his higher ups when he promised that  “If voted to power we will eat beef every day,”  a newspaper report recorded.

As the campaign heats up it is getting even more difficult for the BJP to wash off its image as an anti-christian,  authoritarian, food-policing entity. What with the spoofs and memes floating around on social media to make the point stick. Even famous movie scenes have been dubbed in local languages to ram home the point that voting for the BJP means asking for closure of the beloved beef shops.  A particularly viral one is that of the famous Sunny Deol dialogue ‘yeh dhai kilo ka haah hai’ from the bollywood movie,  Damini.

The problem for the BJP is that even its closest ally and partner in the BJP led platform called the North East Democratic Alliance (NEDA), the National People’s Party (NPP) denies being its ally as this party led by the son of the former Lok Sabha MP, Purno A Sangma, present MP, Conrad A Sangma has its hands full fending off pot shots by the Congress party that it is nothing but the B-Team of the BJP and a trojon horse for bringing in the Hindutva agenda into the state.

As campaigning comes to a close the battle for Meghalaya has become an epic struggle between the nation’s main rival political parties, the Indian National Congress (INC), trying desperately to maintain a toe-hold in the country against the rampage of the, the BJP, which though is India’s ruling party since 2014, still has to prove itself as a party that can stand on its own in the north eastern region’s pre-dominantly Christian states populated by numerous tribes and ethnic communities.

The hill state still has traces of its unstinted love for the Nehru dynasty still wafting around and the Congress has ruled for donkey’s years, albeit through coalitions. It is a corner that the Congress cannot afford to lose, least of all now at its darkest hour when this state happens to be one of the last three left of its earlier country-wide empire.  The other is Mizoram, which goes to polls later this year and Karnataka which hits the hustings in April.

The Congress, led by its dapper and witty chief minister, Dr Mukul M Sangma, who has ruled the roost for almost 8 years, has to deal with a huge anti-incumbency factor of being rulers for so long. Sangma is leading a bed-raggled party into what is seen as its most crucial test.  Loss or win, for either party the result will reverberate across the country as a signal of things to come.

With stakes so high, Rahul Gandhi, the Congress president has done at least three rounds of the state, for the first time walking the streets of Shillong, the capital and doing the same in several other places in the state, a big change from all previous elections when the Congress party always faced polls from the pedestal of power being lords of Delhi.  This time the lineup of star campaigners cannot get close enough to the  grassroots.
Regional parties, playing second fiddle

Away from the shrill campaign of the Congress versus BJP, there is a whole basket of other parties trying to get the voters attention. They  can choose the oldest party of state, the Hills State People’s Democratic Party (HSPDP),  the United Democratic Party (UDP), the newly formed People’s Democratic  Front (PDF), the Khasi National Awakening Movement (KHNAM) , the Garo National Council (GNC) and the National Congress Party (NCP, the last which lost one candidate the first poll related assassination ever here.  The UDP and HSPDP together have a voters share which hovers around around 20 to 22 % as seen in the last 3 elections. Throughout these years their supporters seem never to have given up hope of a regional government.

Referred to as parti riewlum or party  of the hill people, these fragmented parties, once derisively called ‘mushroom’ parties by the late  B B Lyngdoh, who held the post of chief minister several times, failed these aspirations of their supporters as their petty leadership quarrels always came in the way. They could never put up a united front against the Congress party in all its history and ended up fragmented and often a partner in a Congress led coalition. They are also handicapped by the fact that their reach is limited within certain districts and can only be kingmakers, rarely the king.  Like independent candidates, 13 of whom made it to the last Assembly and which was the collective force that has kept the Congress in power this term.

It is here that the supporters of the regional parties find themselves in a profound delima in the polarized atmosphere,  as they mull over the question whether voting for their regional choices as against the Congress would unwittingly mean voting for something that they want to avoid even more, the BJP.