Bengal MLAs Exempt From Anti-Defection Law? None Disqualified In A Decade Despite Switching Sides

A recent example is the defection of veteran leader Mukul Roy, who won the March-April Assembly polls on a BJP ticket but switched over to the TMC earlier this month. 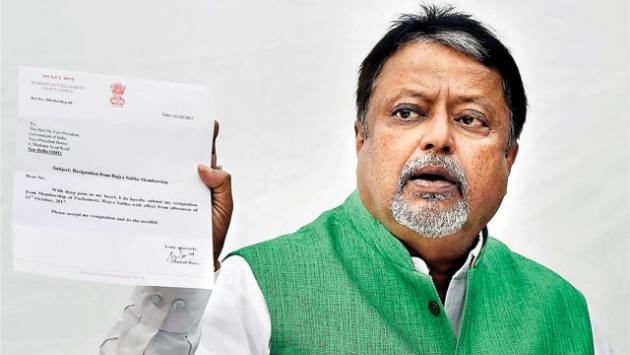 With several MLAs crossing floors and changing parties, the much despised "Aaya Ram Gaya Ram" culture has made a prominent re-entry in the map of Bengal politics in the past decade with none facing any significant consequences listed under the much-coveted Anti-Defection law.

Speaker Biman Banerjee also concurred with the fact that there exists zero instance of MLA disqualification in the last ten years on the ground of defection, even though he denied any further elaboration on this matter.

"It is true that the Assembly has not recorded any case of disqualification since 2011 for switching camps. But I would not get into details," the three-time speaker told PTI.

The most recent embodiment is the defection of veteran leader Mukul Roy, who won the March-April Assembly polls on a BJP ticket but switched over to the TMC earlier this month.

The saffron party, on its part, has filed a plea before the Speaker seeking Roy's disqualification, only to receive flak from the ruling TMC, which said that MPs Sisir Adhikari and Sunil Mondal, who had joined the BJP ahead of assembly polls, should first quit the membership of Lok Sabha.

Since the ascendance of the TMC in Bengal, switching parties, a practice looked down upon prior to 2010, has almost become commonplace, according to political pundits.

Over four dozen legislators from the Congress, Left Front and the TMC switched sides in the 15th and 16th Legislative Assembly -- between 2011 and 2021, they said.

In the 16th Assembly alone, around 24 of the 44 Congress MLAs and eight of the 32 Left MLAs had crossed over to either the TMC or the BJP.

Former Leader of the Opposition Abdul Mannan told PTI that the anti-defection law "has turned into a joke" under the BJP rule at the Centre and the TMC in the state.

"Sadly, no action was taken by the speaker in the disqualification cases that we filed over the years. We stopped doing that after a while as it would have harmed our party's strength in the House. We could have lost the opposition party status," Mannan said.

Giving an example, former Left Front Legislative party leader Sujan Chakraborty said Left MLA Dipali Biswas, who had switched over to the TMC just after the 2016 assembly polls
only to dump the party for the saffron camp last year, continued as a member of the House, despite 26 hearings on her disqualification case.

"When no action was taken against her, we understood that the speaker wasn't willing to initiate any. We stopped filing such application. End of the day, it is a matter of
political will," he said.

The Anti-Defection Law, 1985, states that a member of a House belonging to any political party shall be disqualified if he or she has voluntarily given up the membership of a
political party, votes or abstains from voting in the House contrary to any direction issued by the party he represents, and if a representative of a certain political party joins
another outfit after the election.

As per the Law, the speaker's decision is final but there, however, is no time limit for him to arrive at any decision. A party can move court, but only after the speaker
has announced his decision.

"The speaker not being bound by any timeframe is the loophole that the BJP and the TMC have exploited. There is a need to relook at the law after 36 years," Mannan said.

However, the ruling TMC blamed the opposition Congress and the CPI(M) for not having done their homework properly before moving the disqualification pleas. It sought to differentiate between the turncoats who joined the ruling party and the ones that switched over to the saffron camp.

"Their disqualification pleas may not have yielded any result as they had failed to prove their cases. Also, you can't blame us if an elected member wants to join us to be a part of the developmental process started by the TMC government," Kunal Ghosh, the state general secretary of the Mamata Banerjee-led party, pointed out.

"Those who have switched over to the BJP just ahead of the assembly polls in exchange of something and the ones who have joined our camp over the years can't be clubbed in one
bracket. If the BJP is so serious about the law, they should first take action against Sisir Adhikari and Sunil Mondal," he maintained.

"Since 2011, the TMC has engineered defections of several MLAs by using both money and muscle power. Was that in accordance with the law? The TMC should answer this," he said.

The first instance of defection can be traced back to 1952 when four Forward Bloc MLAs joined the Congress after the earliest assembly elections in the state. They resigned from
their posts, leading to by-elections.

However, what drew national attention was former chief minister Prafulla Chandra Ghosh's decision to walk out of Bangla Congress and the CPI(M)-led United Front government
along with 17 MLAs, in 1967. Ghosh and other legislators subsequently joined the
Progressive Democratic Front (PDF), leading to the collapse of the United Front government.

In the years that followed, however, no major camp change took place till 1998, when a section of Congress leaders led by Mamata Banerjee formed the Trinamool Congress.

Between 1998 and 2001, several Congress MLAs who had joined TMC obeyed the grand old party's whip inside the Assembly to avoid getting disqualified under the anti-
defection law but functioned as a TMC leader outside.

After 2011, however, the state witnessed massive defections as many Congress, and Left legislators made a beeline for the TMC.

The trend changed following the 2019 Lok Sabha elections, when the BJP, having registered a stupendous performance in Lok Sabha polls, became an attractive
destination for the elected representatives of the TMC.

A senior TMC leader said the party would henceforth desist from pursuing the 'Aaya Ram Gaya Ram' culture, coined after Haryana legislator Gaya Lal changed his party thrice
within a fortnight in 1967, and, instead, adopt a "pick and
choose" policy.

Underlining that defection has become a "fashion" in Indian politics, retired Supreme Court judge Ashok Kumar Ganguly, when approached, said that it can only be corrected
by strengthening the law.

"The law needs to be revisited, as the realities of Indian politics have undergone a sea change since 1985. There should be a fixed timeframe for the speaker to decide on
disqualification pleas," he told PTI.

Echoing him, political analyst Suman Bhattacharyawondered whether the BJP, which is at the Centre, would initiate any process to amend this law as it has "highly benefited" from the culture in states where the party did not bag absolute majority.

Political scientist Biswanath Chakraborty is of the view that both the TMC and the BJP are to be equally blamed for making a mockery of the law.

He further said that that the saffron party is tasting its own medicine in Bengal as many politicians it had inducted ahead of the assembly elections now want to be a part of the
winning team.