Devin Booker and Chris Paul helped the Phoenix Suns take down Donovan Mitchell and the NBA-leading Utah Jazz 117-113 after overtime. 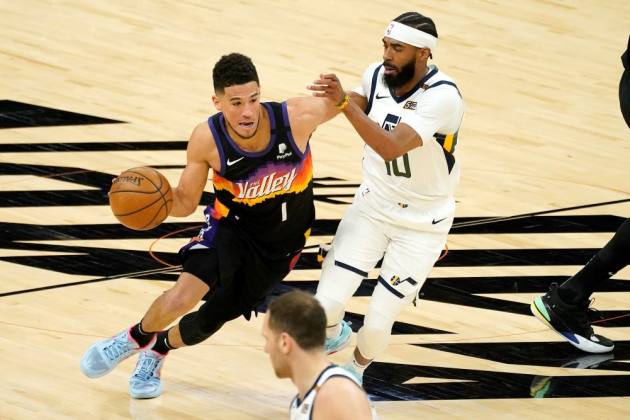 Booker posted 35 points, while Paul finished with 29 points as the high-flying Suns moved to within a game of the best record in the league on Wednesday.

DeAndre Ayton finished with 18 points and 12 assists for the Suns (36-14), who won their seventh successive game after scoring the first five points in overtime and never trailed again.

Mitchell – who nailed a three-pointer with 10.4 seconds remaining to force OT – had a game-high 41 points, eight rebounds and three assists for the Jazz (38-13) in a thrilling encounter.

Jazz team-mate Rudy Gobert put up 16 points on seven-for-seven shooting and 18 rebounds in the losing effort on the road.

Kevin Durant made his long-awaited return in the Brooklyn Nets' 139-111 victory against the New Orleans Pelicans.

Durant had been sidelined since February 13 due to a hamstring strain, but the former NBA MVP returned as the star-studded Nets won midweek.

After a 23-game absence, Durant – initially named in the starting five – came off the bench and posted 17 points on five-for-five shooting in 19 minutes, making both of his three-point attempts.

Durant, who received an ovation from the home crowd at Barclays Center in Brooklyn, also collected seven rebounds and tallied five assists against the Pelicans midweek.

A Russell Westbrook triple-double of 23 points, 15 assists and 14 rebounds led the Washington Wizards past the Orlando Magic 131-116. It was Westbrook's 20th triple-double of the season as the Wizards snapped a four-game losing streak. Bradley Beal returned from a five-game absence and posted 26 points, while the Wizards made a season-best 19 three-pointers.

It was a rough outing for Josh Richardson in the Dallas Mavericks' 102-93 loss to the lowly Houston Rockets. In 29 minutes, he was 0-for-nine shooting for one point. Richardson missed all six of his three-point attempts.

The Grizzlies are hard to beat at the moment thanks to their collective effort. All five starters finished in double-digit points – Ja Morant tallying 19 points, seven rebounds and seven assists, including this combination with Kyle Anderson (16 points, nine rebounds, six assists and two steals).

The Suns (36-14) will put their winning streak on the line when they visit Western Conference rivals the Los Angeles Clippers (34-18) on Thursday. The Clippers are third in the west, behind leaders the Jazz and second-placed Suns.