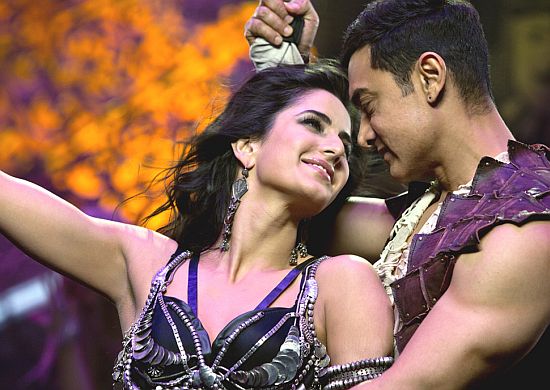 What happens when you decide to eat junk food with the thought and care with which you plan a healthy diet? Well the masalas lose their meaning? Dhoom 3 is street food gone hopelessly bland, a papdi chaat that tastes more like cold porridge. It may well be the most non-entertaining "entertainer" of 2013, so bad that it's a crashing bore. Nothing more.

Despite some great locales and cinematography and testosterone driven action sequences, most of which actually end up being about close shaves and misses (a la the train sequence in Ghulam?), the heist film just refuses to thrill. There is an attempt to lift things above somnolence level by including the flavour of the season--the South cinema inspired auto chase in the Mumbai slums. But the third of the cheesy franchisee lacks an intrinsic spontaneous goofiness and easy lunacy that it so badly needed.

Instead it gets weighed down by the key role and performance, i.e. that of Aamir. It's way too thought out an act for a fun film even as it is a highly over the top, hammy centrepiece of the action. But what it does have is consistency. Aamir is consistent with his arched brows and determined jaw right till the end. The scene quite obviously thought out as the emotional high point doesn't quite resonate and, in fact, detracts from the main business of the film.

Despite their rather planned, starry "entries" Uday and Abhishek pale away behind their shades. Katrina shows off her buff body, does some ungainly exercises in the name of dance, says some seemingly profound phrases like "Swear on my unborn kids" that even teens would shudder at using and then just vanishes in the background. The ones to get a better play than her are the many American extras and the sexy bikes.

The attempt to dwarf America, which is just what the nation perhaps needed post Khobragade, is just as inane. Watch out for the truly daft scene where the Chicago Bank officer asks the badly pancaked policewoman Victoria: "Who is the robber?" Only to be told by her, "All I can say is that it's a thief sir". Brilliant deduction there! This then is the way Bollywood ends 2013, not with a bang but with a whimper.