Diary Of A Mumbai Socialite

I asked hubby — darling, should I tweet in defence of Farah, she's only saying the right thing, na? 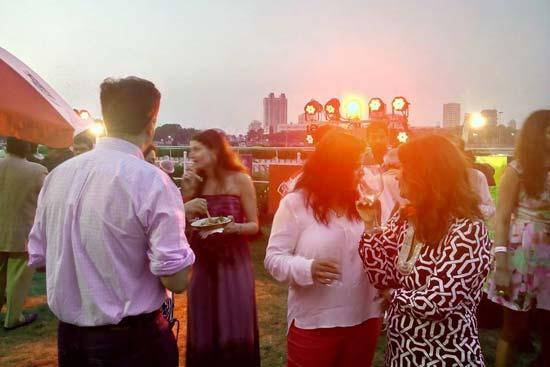 2.30 PM: Just back from yoga class, where Mrs H told us it was unlikely Farah would be attending social engagements including the evening's party due to an FIR out for her. I thought it might be for something sensational — like trying to smuggle jewellery from abroad in inner wear to sell here like what happened to that Siyaram Silk lady — God bless, Farah is a nice girl and all that, but who knows when business starts to suffer and one has to resort to extreme measures like compromising one's own Victoria's Secret inner wear. And who are we to judge, who among us has not gone thorough a bad time — an income tax raid, a cranky father in law threatening to disown, you know... Anyway, it turned out it wasn't even something as exciting as that — only that she tweeted some stuff about those people who sleep on the roads.

Straight after yoga I had my manicure session and and I shared the drive with Mrs H, who is close to Mrs Ambani and I'm hoping to use her contacts to get the kids into the Ambani school, so I had to really suck up and pay attention and hang onto every word that came out of Mrs H's MAC ruby woo coloured mouth — and they say we Mumbai socialites don't work hard, can you believe it — and after the manicure obviously I didn't want to be spoiling my nail art, though I was really curious because even the parlour lady seemed to know and enquired after Farah — and I only got to check Twitter when I got home.

I must confess I can make no sense of it. She's saying remove the homeless people from the footpaths, because some are killed and good people like Salman unnecessarily get into trouble. Nothing wrong in what she's saying — I would have added, they are such an eyesore as well. Terrible to come out of Yoga class, where the decor is pristine white and serene and the music is the latest house, and the scents from Thailand and those wonderful white lilies they always have fresh, and be confronted with filth and dirt and half naked kids.

I asked hubby — darling, should I tweet in defence of Farah, she's only saying the right thing na? — and he said no it's not a good idea and he said it sharply, so I told him about my afternoon which I'd spent sucking up to Mrs H, and he seemed pleased.

My husband and I are very nice to our staff. There is always the possibility that they will steal because that's the instinct of poor people you know, so we have secretly installed cameras all over our house, so if anything is missing, we can just check the tapes. Technology is superb — you don't need to have faith in those less fortunate, you just have to have faith in secret cameras. Your mind is at peace after that, you don't need to be suspicious, and it's so much easier to concentrate in yoga when you are not thinking of whether the maid may have seen you take off your vintage family diamond earrings and might have an eye on them. So much easier to be nice to the staff too when they are being secretly taped, otherwise the anxiety spills over into the relationship and you're afraid you'll nag them and then being ungrateful they'll leave and you'll have to handle the kids alone. I always say like a twist on that wonderful opera we saw in London on our honeymoon, when you can't build faith, just buy it. LOL.

Oops, there's the Tabata instructor at my door — better run. I share him with Malaika Arora Khan, so you know, hoping for some first hand gossip I can share with my close girlfriends later in the evening. People think a social circle comes to you by magic but you've got to work on it — I mean, who ever cared for a girl who never has some exclusive info — quoting from the papers is for the plebs ;)

12.30 AM: So this FIR against Farah was the talk of the party we were at as well. Good thing I had my emerald green Dolce Gabbana gown to debut, which makes gasps and sympathetic expressions look flatteringly dramatic. The Farah FIR is in fact the biggest topic of conversation ever since Suzanne-Hrithik divorce or maybe even Fardeen Khan's drug bust. Even that singer Abhijeet is charged, but he's not part of our circle you know — not personal but there's a class difference — using crass language and calling the homeless people "dogs" meaning it as an insult, who does that? We all love our adorable babies ,our chihuahuas and would never insult them.

But that silly girl Mrs R didn't even know what FIR was, she wanted to know if it's the name of a new cocktail drug, can you imagine, how illiterate. Thankfully my girl gang is very well informed, we read the papers daily and all, you know, can't afford to sound completely stupid when Vogue comes to interview you and stuff. Got to say some smart things, even make some passing references to politics, though nothing that will put the husband's company in a tough spot. It's a fine balance we Mumbai socialites have to strike.

Anyway, so coming back to Farah, everyone was like, poor thing, you know, doing so well with that jewellery line, so talented, so friendly despite coming from a Bollywood family, and then getting caught in this unfortunate stuff. Of course the homeless types should be given some designated bylanes and some blankets by the government to sleep cozily in — maybe even atop a few trees — why footpaths, that's just so cruel. Everyone deserves their own obscure patch of mud in a bylane rather than a chance at being hit by a big BMW. The poor are people too. What's wrong with what she said?

But anyway, there was this lawyer type who said this was very condescending and that Farah had made a fool of herself — it made the rich sound very insensitive and only interested in themselves and their needs. But I couldn't understand — when Farah was actually asking the government to shift the poor homeless people from hard footpath with traffic horns and street lights to soft mud where it was dark and no traffic — wasn't she arguing for a better life and sound sleep for the homeless? Wasn't she thinking of their needs by campaigning for a more sleep friendly designated area? I mean, I can't sleep until the temperature is just right, the curtains are drawn and the mattress has to be top notch quality. Surely the poor deserve better, like soft mud, than a hard footpath? I thought it was very kind of Farah to think of them.

Well it's all in connection to Salman Khan and how they got in his way, so the rest is just la la land bs, said the lawyer sharply. They were not sleeping on "roads" firstly as she said, that's completely illiterate, they were on footpaths. And secondly, have you seen this city? Where is the space? The footpath *is* the space the homeless can find.

Anyway, she was very rude. I resolved to pray for that rude lawyer at yoga class. One must pray for all rude people who need to heal themselves. Karma is important, you know. For instance, I was so nice to Mrs H, I am sure my Karma will come back to me, routed through Mrs Ambani, and in the form of admission for the kids at the Ambani school where everyone is so chic, I'm told the kids give ipads as back presents at birthday parties.

Must also send out a prayer for these desperate poor types who might feel the need to steal — dear god, lead these creatures not into temptation — plus I have an emotional attachment to my jewels and would have a nervous breakdown should anyone take them — and a prayer also I guess to those homeless types, since they have been popping into our conversation all day, who will never know the luxury of a mattress like mine. I really am fortunate. Life is hard for some, literally. LOL. Quite a clever pun there, and then these journalist types keep stereotyping us as dumb. Just jealous probably, should pray for them too, imagine, once out of curiosity I asked one how much jewellery she had, and she said nothing genuine except the earrings:

I'm going to have nightmares thinking of a life like that. Ugh. Goodnight. Sweet dreams.

(?The writer is a journalist and author of Among the Chatterati: Diary of a Page Three Hack (Penguin India)?