Did RML Hospital Hold Up The News Of MP E Ahamed’s Death?

“He is not a terrorist. He is an MP and a former minister,” Sonia Gandhi was heard telling the doctors who denied permission to the son and daughter of E Ahamed to see him in the ICU amidst the midnight drama at RML. 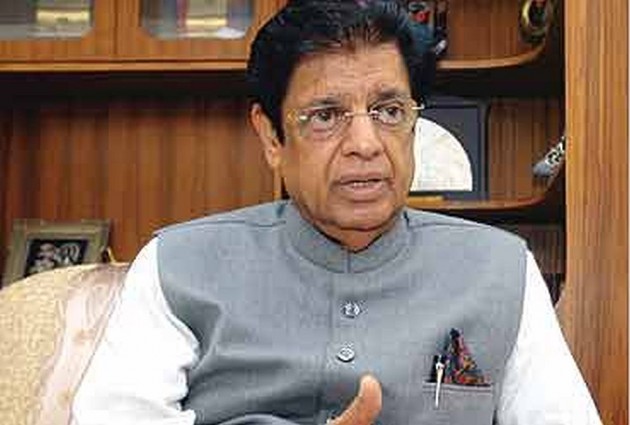 The iron curtain that RML Hospital pulled over the late E Ahamed when he was rolled in after fainting in Parliament had forced the family to allege that the authorities were being deliberately secretive about the health status of the sitting MP and former Union minister of state for external affairs.

When the medically qualified daughter and son-in-law of the MP found something amiss in every step that the hospital doctors were adopting–- shifting Ahamed out to closed trauma care, attempting to do medical procedures without family consent, disallowing a glimpse of their father – they knew the doctors were delaying the bad news.

The hospital kept extreme secrecy about Ahamed’s health status by not even allowing his family members, close aides, Parliament colleagues and his children to see him at the trauma care. Ahamed’s daughter Dr Fousiya and son Naseer Ahamed flew in from Muscat and Dubai to attend to their father. However, both of them were denied permission to see him. 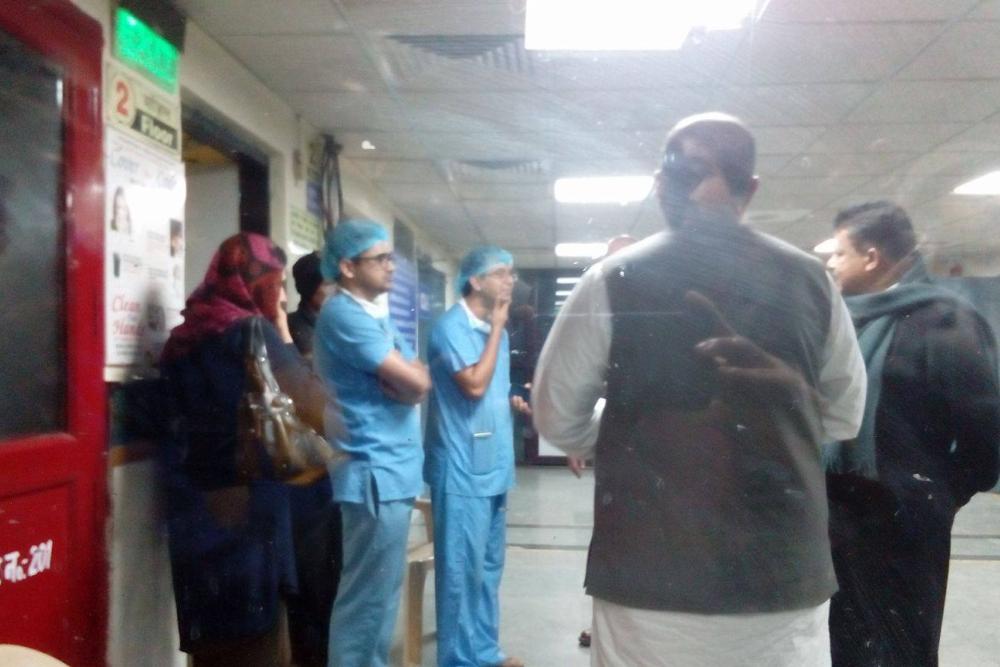 Ahamed’s son-in-law Dr Babu was heard saying to the junior doctors that he and his wife were doctors and did not understand why they were being shut out from seeing their father. After much pleading and arguments with the doctors, including by members of Parliament from Kerala, Fousiya was allowed to see him -- for less than five seconds -- through the glass window.

This left the people gathered outside the trauma centre perplexed.

Those who knew Ahamed were aware that the Malappuram MP was not doing well recently. He was admitted to hospital a couple of times during his visit to foreign countries. A five-time MLA and seven-time MP, Ahamed had a good rapport with political leaders cutting across party lines.

As the night wore in, Congress president Sonia Gandhi, Vice President Rahul Gandhi and senior party leaders Ahmed Patel and Ghulam Nabi Azad rushed to the hospital to enquire about the health of IUML national president who was a close ally of their party in the state and national level. The leaders also talked to the doctors. But, they were also refused permission to see Ahamed. 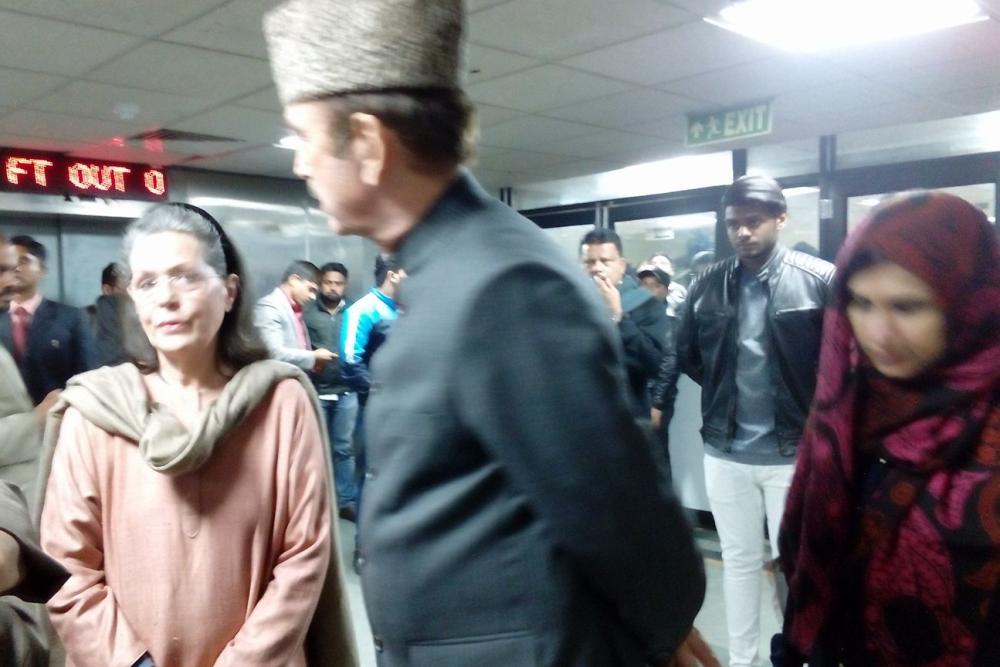 “He is not a terrorist. He is an MP and a former minister,” Sonia Gandhi was heard telling the doctors who denied permission to the son and daughter of E Ahamed to see him in the ICU.

Later, Ahamed’s son and son-in-law decided to speak up. They told this correspondent in a Facebook live video that they had been kept in the dark about their father’s health status.

“As a son I have a right to see my father. That’s all what I am asking for,” said Naseer.  “We need answers. Treat him as a human being. Treat him with respect and dignity,” added Dr Babu.

Sources close to Ahamed told Outlook that the hospital went incommunicado after minister of state at the Prime Minister’s Office Jitendra Singh visited the hospital. Soon after Singh’s visit, Ahamed was shifted from the open ICU to the trauma care and since then no one was allowed to see him. 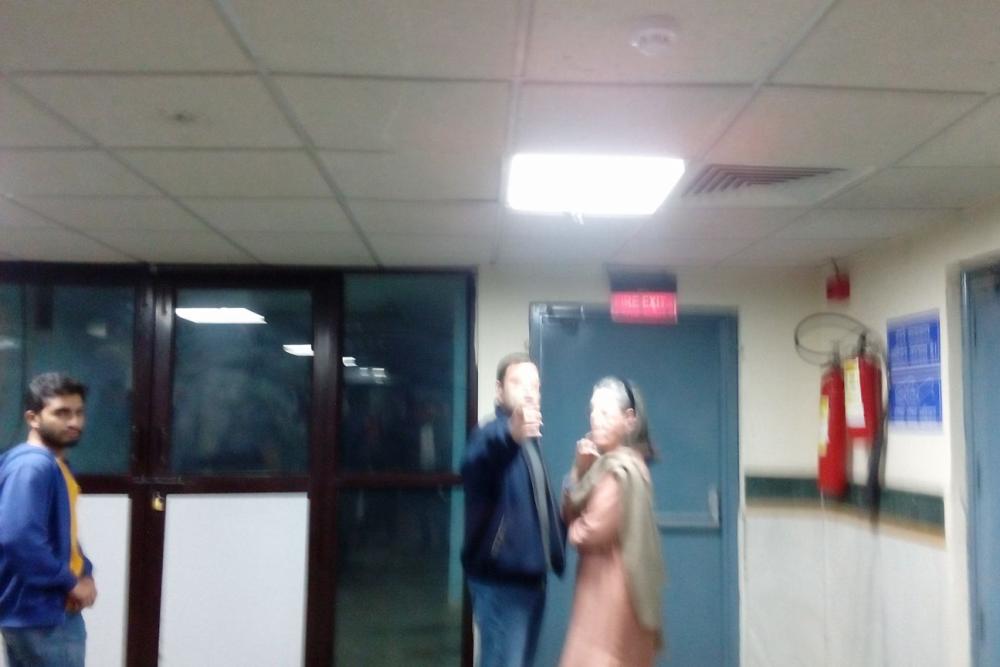 A close aide of Ahamed said that his eyes were covered while he was taken from the open ICU to the trauma care, which the doctors explained away as a procedure to stop eyes from drying up. Sources in parliament said the Prime Minister’s doctor had attended to Ahamed at the Parliament house itself. Earlier in the day, the Superintendent of the hospital AK Gadpayle told media persons that Ahamed was being revived but didn’t issue any medical bulletin, a standard process in cases of public personalities.

As the secrecy was becoming unbearable to the family, they asked the hospital authorities to let them take Ahamed to another hospital, and threatened to go to police if they weren’t allowed.

Past midnight, Dr Babu came to the media persons and declared Ahamed was “no more.” When reporters asked him whether there was an official confirmation from the hospital, he said, he was a doctor himself and the reporters could wait for the official declaration.

Later, RML declared officially that Ahamed died at 2.15 am Wednesday.