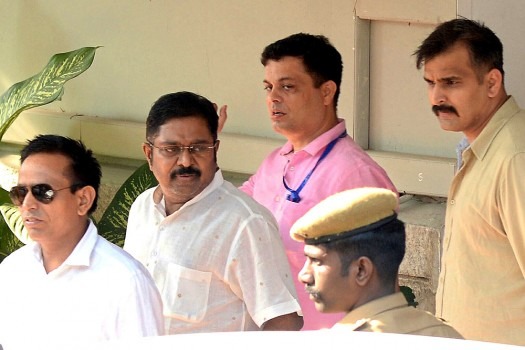 After the merged factions of the All India Anna Dravida Munnetra Kazhagam (AIADMK) expelled V.K. Sasikala from the party, sidelined party leader T.T.V. Dinakaran on Sunday asked the Tamil Nadu Chief Minister E. Palanisamy to resign as well, because "whatever he is today, he is because of Chinamma [Sasikala]."

Questioning the annulling of his aunt Sasikala, Dinakaran said, "It's because of Chinamma (Sasikala) that EPS and other ministers are where they are. Will they resign as they want Sasikala's removal?"

Dinakaran's representatives then approached the Election Commission (EC) and urged it to declare the party's general council meeting null and void.

Dinakaran faction of AIADMK also moved the Madras High Court on September 14, demanding a floor test in the Tamil Nadu Assembly to prove the majority of the Edappadi K Palanisamy government.

The Madras High Court later ordered that no floor test will be conducted till September 20. (ANI)