Earlier in the day, the TMC chief said she was not vying for the post of prime minister and the candidate for the top post would be chosen collectively by all opposition parties. 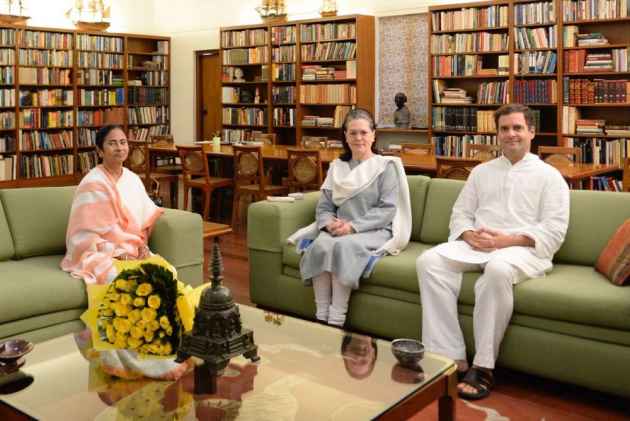 West Bengal chief minister Mamata Banerjee on Wednesday hinted at all opposition parties coming together and contesting 2019 elections against the BJP.

"We discussed current politics and the possibility of all of us contesting elections together in future,"  Banerjee told the media after meeting senior Congress leader Sonia Gandhi and party president Rahul Gandhi.

Earlier in the day, the TMC chief said she was not vying for the post of prime minister and the candidate for the top post would be chosen collectively by all opposition parties.

Banerjee, who has been trying to consolidate opposition unity, spent the second day of her Delhi visit meeting leaders of various parties including the Congress, TDP, YSR(Congress), DMK, RJD, SP and JD(S) and invited them to her rally on January 19 in Kolkata.

Banerjee also met veteran BJP leader LK Advani at his chamber stating that her relations with him go back many years. Sanjay Raut of Shiv Sena, an NDA constituent, also came to meet Banerjee at the TMC office and she invited Shiv Sena chief Uddhav Thackeray to the January 19 rally.

Banerjee said the first priority is to bring all opposition parties together to take on the BJP in the coming Lok Sabha elections.

"I am not for any post. I am interested in seeing that all parties should work together. All political parties will sit together and decide," she told reporters wile replying to queries on the issue.

She spoke to Congress leader Gulam Nabi Azad and Ahmed Patel. Banerjee also met Advani at his chamber."I went to meet him and enquired about his health," she told reporters.

Suspended BJP member of parliament Kirti Azad hailed her as a great leader and said her efforts to consolidate all opposition parties are "commendable".

The TMC chief later went to the Central Hall of the Parliament to meet other opposition leaders and invited them to the rally.

Banerjee also appealed to all the opposition parties to send a joint delegation to the Election Commission against EVM tampering and holding polls on ballots. "All opposition parties should go to EC on this matter," Banerjee told Congress and other opposition leaders.

Banerjee also met JD(S) leader Deve Gowda and invited him to the rally.

She has also appealed to the leaders to send an all opposition party delegation to Assam stating that though TMC delegation would be visiting Assam on Thursday, other parties should also create pressure on the government.

Banerjee sharpened her attack on the BJP over the draft National Register of Citizens (NRC) in Assam, accusing the party of playing vote-bank politics, while also warning that the issue will "destroy" India's relationship with Bangladesh.

On Tuesday, she had alleged that the NRC exercise in Assam was done with a "political motive" to divide people and warned that it would lead to bloodbath and a civil war in the country.

"I am not BJP's servant to reply to any of their statements. I didn't say this (civil war remark), my concern is regarding the 40 lakh people whose names are not in the list (NRC). The BJP is politically tensed because they know they won't come to power in 2019," Banerjee.