Xander Cage’s mentor tells him: “Kick some ass. Get the girl. And try to look dope while you’re doing it.” Which is what Vin Diesel proceeds to do with much relish. 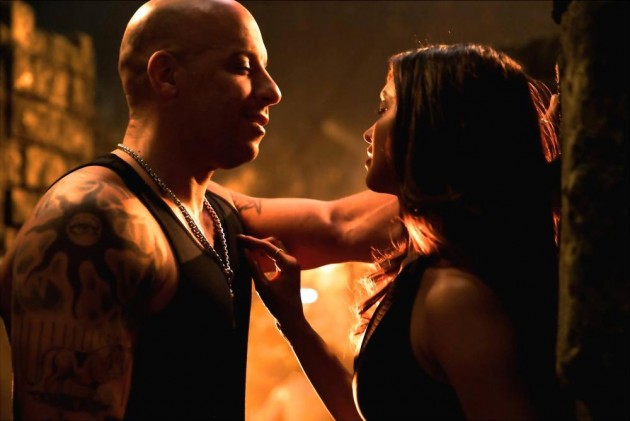 Unlike other action heroes, Diesel looks like he is having fun.  When his audience knows that he will beat the enemy and survive even a fall from an airplane without a parachute, he doesn’t have to appear like he is straining a muscle. He also saves the make-up department some effort by coming out after every violent encounter without a scratch. The leading girl in this film is Serena Unger, which means Deepika Padukone gets to wear slinky costumes and kiss Diesel.  In a very amusing scene they also compare tattoos—Diesel wins in that department with lavish body art.

When the above-mentioned mentor, Augustus Gibbons (Samuel L. Jackson) is killed while trying to recruit a reluctant footballer to the X programme (for kicking ass,mainly) by a deliberately crashed satellite, Xander Cage  is hauled out of retirement in South America, where he is having a blast, zooming around on skis (this has to be seen to be believed) and skateboard, and, umm, romping with a girl.

It seems a gizmo called Pandora’s Box (just an excuse for all the extreme stunts) is being used to crash satellites, and when the baddies steal it, Cage is told by a boss lady with a fearsome pout (Toni Colette) to go get it back. The theft scene has a jaw-dropping action sequence in which one of the guys knocks off a pursuer on a bike and gets on it himself while it is still moving at high speed.

Turns out the oriental baddies (Donnie Yen, Tony Jaa) that include Serena are actually on the right side, so all of them get together and leave the villains with no chance of getting away.

In the process, more weapons are fired and more cars crashed (Rohit Shetty, please note) than the viewer can count. It’s very entertaining, and Diesel’s expression is that of a kid in a candy store—the cheeky grin almost never slips.

In all fairness, the gang of Diesel’s cohorts and informers has ladies, like the tech expert Becky (Nina Dobrev), a green-haired animal-loving sniper (Ruby Rose), plus a Chinese man (Kris Wu)  At least the guy, like so many action heroes (Bond for instance), cannot be accused or racism or sexism.